Leeds Rhinos director of rugby Kevin Sinfield targeted raising £77,777 by running seven marathons in seven days in aid of Motor Neurone Disease after his friend Rob Burrow, 38, was diagnosed. As of December 8, Sinfield has raised over £2.4m for his efforts. Below he talks to Sky Sports...

"The greatest thing I've ever done" - just one of a number of soundbites from Kevin Sinfield's interview on this week's Sky Sports Rugby Will Greenwood Podcast.

For seven days in succession, former Leeds Rhinos skipper and current director of rugby Sinfield got up early in the morning, before embarking on a marathon, done to raise funds for his friend and former Leeds team-mate Rob Burrow - aged just 38, who was diagnosed with MND 11 months ago. A monumental challenge.

He set about raising £77,777 after the week - seven being Burrow's former number. As of December 8, one day on from his seventh marathon, Sinfield has raised an astonishing £2.4m and counting.

"It has been an unbelievable week," Sinfield says.

"It's devastating for all of us [Rob's condition]. You don't want that for anybody.

"And that's why this disease is so cruel because for some people, it's so, so quick.

"To understand that everything in his mind is exactly the same, but there's just stuff that has stopped working.

"It is so cruel. And the stat itself: 50 per cent of those diagnosed are gone within two years. That's it.

"Every time I see him, his eyes light up, he has that twinkle and there's a big smile.

"It's the greatest thing I've ever done, without a shadow of a doubt. There's no better feeling in the world then being able to help people.

"To see Rob's face after running, to get his text every night, they're just priceless moments." 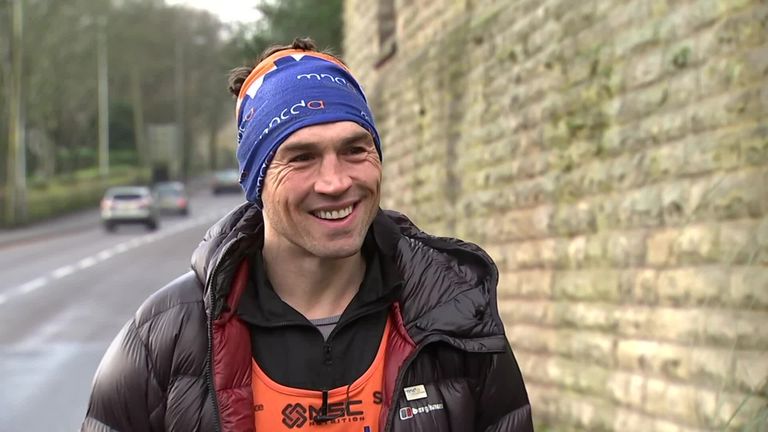 Sinfield feels 'completely overwhelmed' after passing the £1m mark for the Motor Neurone Disease Association. He has since passed £2m

What has it been like? And what has a normal day looked like to accomplish such a challenge?

"I've lost no weight, because I've been taken on so many calories, and I've had very little sleep as well.

"I got to day three and was starting to stress a little bit, because I was just not getting any sleep. I was almost getting in bed and overheating.

"I just had to get on with it, and I'll sleep after.

"Out of bed at 5am, bit of breakfast, and then every morning there's been media stuff and radio interviews, so I've been trying to do that while trying to have some breakfast and a cup of coffee and sort of switching my mind to get ready to run and block out pain.

"I know it sounds daft, but there's a difference between pain and being injured. being able to just block the pain out and run.

"Given the challenge was around Rob's squad number and the number 7, it just seemed fitting that we started at 7am.

"I'd get the run done and within a 30-minute window straight after, try and cram calories. Straightway, a regeneration shake, and then most mornings, it was a bacon and egg butty and a cup of coffee.

"Honestly, that was it. That first 30 minutes was vital, and I'm not kidding, my shake, a bacon butty and cup of coffee, within 20 minutes of finishing I was good as gold.

"When I say good as good, I didn't feel tired, felt like my energy was back to where it should be. I was leggy, and then it was a case of get home, get in the ice bath for 15 minutes, get the tubing grip on my feet, my calves, my shins, my knees.

"No masseuse because of Covid, rest up throughout the day and just before my evening meal, I'd go and get on the Watt bike for 15/20 minutes, and just turn my legs over. Seriously, I read up about this.

"When I run I get tight hip flexors, so the best thing for it is the bike, really low level, just turn them over and then straight back into the ice bath.

"Then tubing grip back on, evening meal, chill out and then bed at 9pm. Well in bed but rolling around.

"My poor wife, she's not slept for a week either. She's had me rolling around next to her."

Sinfield finished all seven marathons sub-four hours. Why did he set himself such a task?

"There was a fair bit of winging it to be fair. We only threw it together seven weeks ago, and at that stage it was really low key, we didn't have a clue it was going to go where it went to.

"I did a sports science degree at university so have an understanding of nutrition and mental state as well, but you're talking the best part of 15 years ago when I did that so a lot of it's been updated and changed.

"But I read up about a famous 10 in 10 Brathay marathon, which is 10 marathons in 10 days they do up in Cumbria. It's incredible.

"My PB is 3hr13mins, which I did in late July this year, having had a fair amount of time in lockdown where I ran every day.

"We wanted to do an extra hard challenge because how tough a year has it been for everybody? People losing jobs and wage cuts.

🏃 Seven marathons in seven days, with each one well under four hours! Take a bow, Kevin Sinfield 👏

🙌 And the fundraising total has just reached an amazing £1.3 million!

"Rob Burrow is absolutely central to what we're trying to do, but there comes a point where we were banging on the same doors time and time again and asking the same people.

"We had to be different, we had to make it intense and try to capture people's attention on it and say: this is what we're going to do.

"Ultimately we need to get a cure. And we've seen over the last four months, how quickly a cure can be developed, as with Covid.

"If we throw enough money at something, we will get some answers.

"I know there are so many worthy charities, diseases, illnesses out there that need funding, absolutely, but there is so little funding in MND.

"There's not been a drug developed in the last 28/29 years, and that's just criminal.

"It's been put in the: too difficult to fix box. And we need to get it out, because it such a cruel disease what it does to people and to families.

"This leaves a mark. Someone like Rob Burrow who is fit and strong, suddenly within a few months he's having to have everything done for him. That changes a family dynamic completely.

"We have to try and find a cure to stop this disease ravaging families."

Sinfield on his friendship with Burrow:

"We started as juniors. I'm two school years above Rob but I knew of him because back then, they used to get the junior players in to train with the first team once a month.

"We were kids, we were babies. I'm from Oldham, Rob's from Cas, so I had no real idea of who he is.

"So we see this little guy zipping about who is absolutely tiny. Do you remember the old PlayStation game Jonah Lomu Rugby? The little guy who was mega fast - that was Rob Burrow.

"He was just unreal. Rob joined the academy at 16/17 and I was in and out of the first team at the time, on the fringes.

"Over that next couple of years you start to cross paths a little more, you play a few reserve games together, then he starts to make a few first-team appearances, and before you know it, I'm 22 and made captain and he's 20 and in the first team every week and we're sitting next to each other in the dressing room every single day.

"That's where the friendship started. But we were a real close-knit side and the core of that team, probably nine or 10 players, stayed together for the best part of their careers. You're talking 10, 12, 15 years together.

"What comes with that is some amazing times together and going through some really tough times, and that just builds those bonds you get in rugby and a lot of team sports.

"We fast forward to December 2019, Rob's been retired for two years and he finished as a Grand Final winner at Old Trafford in October 2017 - his eighth Grand Final win - and we start to notice his speech is not quite where it was.

"We put the pressure on him to go and see our doc, he then goes through a series of tests, and within six weeks we get the diagnosis through and it just rocked us all and absolutely floored everybody.

📜 Wonderful words from @LukeBurgess87 as Kevin Sinfield finished his seventh marathon in as many days yesterday...

"This is the week before Christmas 2019, so only 11 months ago. Very quickly, Bryan Redpath, my old coach at Yorkshire Carnegie, reached out straight away and said I'll get you up to see Doddie Weir. He arranged that and we were there within two days, which was brilliant and really good for Rob.

"That was when that incredible picture of a 6'5" Doddie Weir standing next to a 5'4" Rob Burrow was taken.

"We came away quite buoyed, Doddie was so positive. We chatted a lot on the way home about what the immediate future could look like for Rob, and certainly about enjoying Christmas and trying to make some really good memories with his three young children as quickly as possible, and spend some time with them.

"The club and former team-mates rallied, we had the game in January, we had the gala dinner, where a host of sporting legends attended.

"But then we hit lockdown and Covid and everything just hit a standstill.

"Throughout that period we obviously all kept in touch with Rob, but things have changed dramatically for him. He's now in a chair, he now communicates through his phone.

"Covid hurt and stopped a lot of the things we were hoping to do for him throughout the year. Hence, this was put together seven weeks ago, crazily by myself.

"I thought we had one chance of doing something pretty special.

"Rob's player sponsor throughout his time at the Rhinos had a big sum of money he wanted to donate, and jokingly I said: 'Why don't you sponsor a challenge? I'll do it.'

"He said: 'What will you do?' And I said I'll do another marathon. He said: 'No, this is the amount I want to donate, a single marathon isn't enough.' So I said, jokingly again: 'I'll do seven in seven', and he said: 'Alright then'.