Half-back Gale suffered the injury in pre-season training and is due to undergo surgery next Wednesday. Rhinos head coach Agar expects the England international to miss the start of the 2021 Super League season, which kicks off on March 11

Luke Gale is set to miss the start of the 2021 season due to a pectoral injury suffered soon after Leeds Rhinos' return to pre-season training.

The half-back, who kicked the winning drop goal for the Rhinos in last year's Challenge Cup final, is due to undergo surgery on the injury next Wednesday and has an expected recovery time of up to 10 weeks.

Leeds head coach Richard Agar is resigned to being without Gale for the start of the Super League season, which is set to get underway on March 11, but is optimistic he will not have to wait long for the England international to be available again.

The Rhinos were not going to let a bit of snow stop them getting the important work of pre-season done this morning pic.twitter.com/yL04GY5cuC

"Luke's enthusiasm, I guess, got the better of him in the gym and he has torn his pec through lifting in the gym," Agar, whose team returned to pre-season training this week, said.

"It's one of those things; he was fully warmed-up and not over-doing it weight-wise, but he has torn his pec so it's a really tough one to happen in the first couple of days - but if it's going to happen, it's best to happen now so we can get it fixed up.

"He is a good healer, is Luke, and he'll tick every box. It's going to be unlikely he'll make the start of the year, but he won't be too far off.

"He was absolutely buzzing about coming in this year, and to cop something like that is disappointing and a frustration. But it's the sport we play and unfortunately, every now and then, you get incidents like this."

Agar has better news on the injury front for Alex Sutcliffe, Luke Briscoe and Jack Walker though, with the trio having the target of being ready for Super League's kick-off after all underwent shoulder surgery in the off-season.

Harry Newman is ahead of schedule in his recovery from the broken leg he suffered in the 41-16 win over Hull Kingston Rovers last September and Agar is impressed with how the 20-year-old has dealt with his recovery.

"He has handled the time off and the injury, and attacking what he has got to do day by day, really well," Agar said.

"It could be a really difficult period training on your own and after such a huge, traumatic injury for him. The way he has dealt with it has been remarkable for such a young bloke."

Meanwhile, Agar paid tribute to Stevie Ward after the Leeds captain announced his retirement at the start of the week due to continuing symptoms from two concussions suffered last year.

The Rhinos boss recalled how grateful he was for the role Ward played soon after he took over with the team at a low ebb following David Furner's departure in 2019.

Agar revealed the key role the 27-year-old had in the revitalisation of the Rhinos which led to last year's Challenge Cup triumph and a return to the Super League play-offs, even though injuries restricted him to only making a handful of appearances on the field during his time in charge.

"Early on in the team meeting, I felt we'd got a really intelligent, experienced player in the room," Agar said. 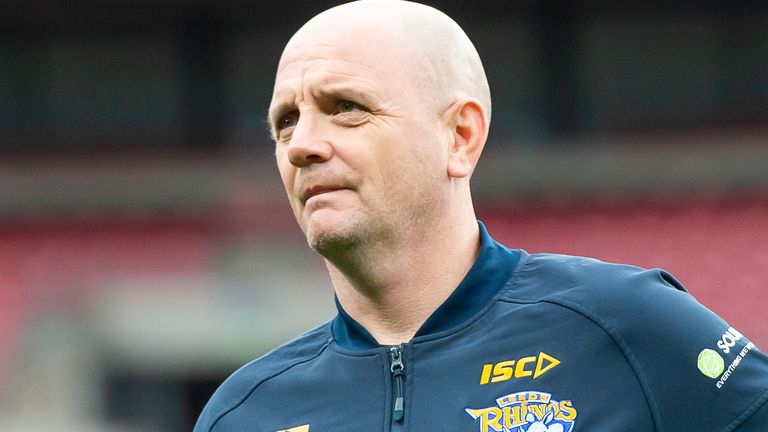 I spent a lot of time with Stevie going through what we felt we needed to do to renew and reinvigorate the squad...I'll forever be grateful for his input at that time.

"He was pretty quiet, and I asked him a couple of questions and I could see he wasn't happy with the way things were in the squad and the club at that time.

"I subsequently spent a lot of time with Stevie going through what we felt we needed to do to renew and reinvigorate the squad, and Stevie was very much a catalyst and driver in that. I'll forever be grateful for his input at that time."