There are three things that stick out in Leroy Cudjoe's mind about his first-ever game of rugby league with Newsome Panthers U11s. One is it was cold and wet, the second is an opponent stood on his hand, and the third is he scored a try.

Fortunately, neither of the first two put him off playing, and over 20 years later he stands on the verge of making his 300th appearance for hometown club Huddersfield Giants, having already passed 300 total club and international career appearances last year.

Cudjoe is set to reach the milestone in Thursday's Super League clash with Hull FC, live on Sky Sports, and it is the latest chapter of a lifetime in rugby league which began with his grandparents taking him to watch Huddersfield and then going along with some friends to play for community club Newsome.

It was not until he was given a full-time contract the centre thought he might make it as a professional though, with that dream finally being realised on the opening day of the 2008 season when the Giants hosted Leeds Rhinos in front of a club-record Super League home crowd of 15,629.

"I remember [then head coach] Jon Sharp telling me the week before I would be playing so look after myself this weekend," Cudjoe told Sky Sports. "I was only allowed to tell my grandparents as he knew they were big fans.

"On gameday the atmosphere was amazing. It was the first game of the year against a very good Leeds Rhinos team; I came off the bench with 20 mins to go, I ran the ball into Jamie Jones-Buchanan and felt like I had run into a brick wall. We lost the game in the end, but I had that taste for it and knew it's where I wanted to be, playing in the first team.

"I always dreamed of becoming a Super League player but never really knew I would make a career out of it until I was training full-time. I just loved playing rugby league any chance to be training or playing games I was there."

The influence and advice of fellow Huddersfield three-quarter and former New Zealand international Jamahl Lolesi proved pivotal for the young Cudjoe, as did the arrival of Australian head coach Nathan Brown the following year in helping him fulfil his potential.

Another big influence who arrived at the club in 2009 was the man now in charge of the team Huddersfield will be up against on Thursday night in Brett Hodgson, and the former Giants full-back is delighted to see how his former protégé has become one of the key players at the club.

"He was always one of those kids coming through working hard to better himself," Hodgson said. "He was a respectful and competent player, he's worked really hard to get where he's got to, so it's no surprise to me that he's been playing this long.

"We played many games together. He came through as a full-back when I was there so I tried to help him with his games. 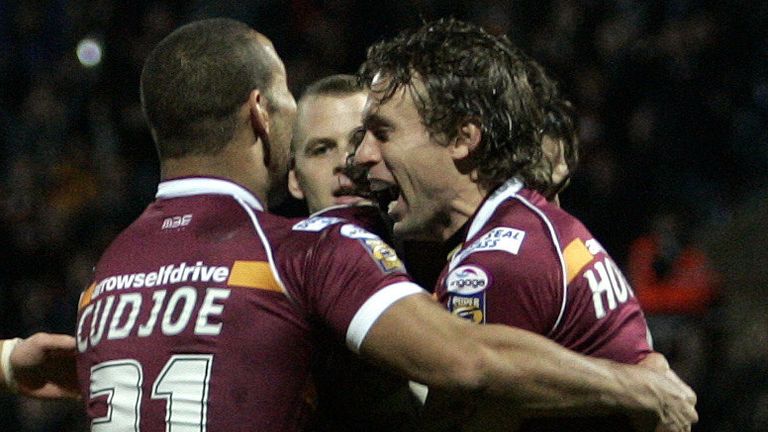 He was a respectful and competent player, he's worked really hard to get where he's got to, so it's no surprise to me that he's been playing this long.

"He was one of those players you wanted to play alongside because everything he did, he did with passion, and he always gave it all for his hometown club. I'm really proud of what he's done."

Being part of the team which brought the League Leaders' Shield to Huddersfield in 2013 - the first time the club had finished first in the top flight for 81 years - and winning 10 England caps including appearances at the Rugby League World Cup are among the career highlights for Cudjoe.

Offers to move elsewhere have been made too but, much like fellow Giants stalwarts Michael Lawrence and Jermaine McGillvary, Cudjoe has stayed loyal to Huddersfield and forms part of a strong backbone of homegrown talent in the squad which continues to filter through.

"I have had interest in the past to go elsewhere, but Huddersfield's my home and they gave my opportunity when no one else did," Cudjoe said.

"It's massive to have a strong backbone of homegrown players. If you look at the successful clubs like St Helens, Leeds and Wigan they have all always had a group of homegrown players who have progressed through the ranks and understand the club's values and the community.

"We hve got a lot of young players coming through our system at the moment which is very exciting, and hopefully once me, Jermaine and Michael have gone they are still here and pushing the club on to bigger and better things."

Cudjoe is still some way short of the 423 appearances one of his early role models Eorl Crabtree made in a Huddersfield shirt, and at 33 he is already considering what life holds after playing having taken his coaching certificates and looking at careers outside of rugby league.

But he is aiming to impress head coach Ian Watson enough to earn a new contract when his current one-year deal expires at the end of this season and still has ambitions of helping bring one of the sport's major honours to the John Smith's Stadium. 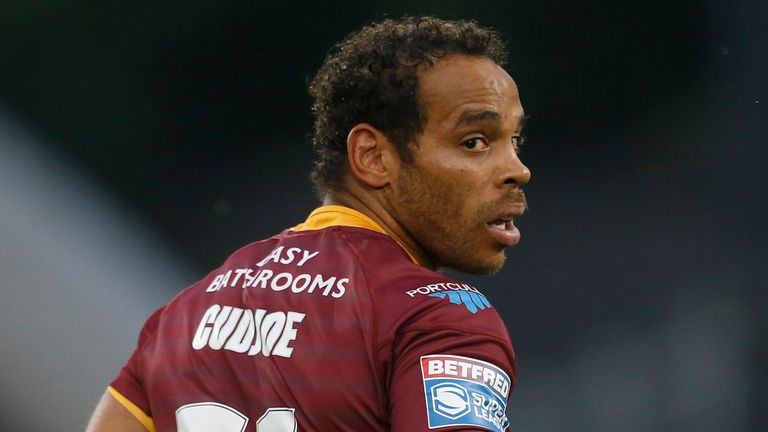 Playing 300 games in a career is a great achievement and to be able to do it for one club, my hometown team, is even better.

"I want to win trophies with Huddersfield and being a part of a group that helped win a major trophy with my hometown club would mean a lot to me and my family," Cudjoe said. "I also want to be a role model for young kids coming through like Eorl and Paul Reilly were for me.

"I certainly see myself playing next year and hopefully I can get something sorted soon with that. Beyond that I'm not sure, I'll take it year by year and see how my body is holding up, and if I'm still playing decent rugby then who knows?

"Playing 300 games in a career is a great achievement and to be able to do it for one club, my hometown team, is even better."