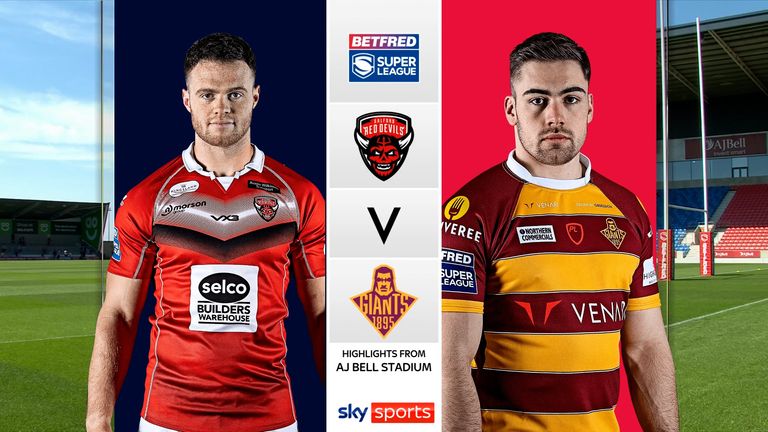 Salford kept their hopes of a Super League play-off spot alive with a hard-earned 33-16 win over Huddersfield in intense heat at the AJ Bell Stadium.

Paul Rowley's side raced into a 26-6 half-time lead with tries from Ken Sio, Joe Burgess, Kallum Watkins, Ryan Brierley and Tim Lafai but had to withstand a determined Huddersfield fightback after the break.

Salford also had to survive for 10 minutes without their playmaker Brodie Croft after he was shown the yellow card on the stroke of half-time.

A brace of tries from Sam Hewitt and one from Chris McQueen, along with two goals from Olly Russell, kept the third-placed Giants in the hunt, but the win means Salford are still just a point behind sixth-placed Leeds as the regular season reaches the final stretch.

Salford coach Paul Rowley hailed a "really satisfying" win, saying: I thought our start was really important. Huddersfield are a very good side, but we wanted to start on our best foot. We got some points on the board then had a sin-bin which was really difficult to manage in this heat.

"It challenges the character of the players, but they managed it. We fully deserved the win against a good team."

On the race for the play-offs, Rowley said: "It was important to stay in the pack. Everyone is saying they don't look at the league, but, the truth is, we're all looking at the league.

"Beating a team above us in the table is important and Huddersfield have been very, very consistent.

"Every week it feels like the other results don't go our way, but we just have a chuckle about it. We don't let it get us down.

"It's been said we've got one of the hardest run in, but we only focus on week to week. We just crack on.

"We believe in what we do and what we're about. To deliver what we did today was really satisfying."

Salford were without Dan Sarginson through injury but welcomed back Harvey Livett and Tyler Dupree in the pack. Sam Luckley was missing through the head injury protocol.

Huddersfield's former England prop Chris Hill started for the first time since suffering an injury in the early stages of the Challenge Cup final defeat to Wigan in May.

Huddersfield had already beaten Salford twice in 2022, but they were rocked by a stunning start by the home side as they scored three tries in the first 12 minutes.

Prolific winger Sio raced in for his 23rd try of the season with only three minutes on the clock. Croft managed to get away from the first wave of Giants defenders before sending the ball right to Deon Cross who in turn fed Sio for a try, which Marc Sneyd converted.

Former Red Devil Tui Lolohea then dropped the ball under pressure and winger Burgess collected before sprinting 80 metres to the try-line.

The pressure from the home side was relentless and they soon posted a third try. Croft threaded a kick through and Watkins hacked the ball on again before winning the race for the bouncing ball, touching down before Sneyd converted to make it 16-0.

Huddersfield had struggled to get a foothold in the game so they were grateful to their second-rower McQueen, who stole the ball one-on-one from Burgess on his own 20-metre line and raced to the corner.

But rather than signal the start of a Huddersfield fightback, Salford replied with two tries in six minutes.

Some tremendous interplay between Brierley and Sio from the scrum ended with the former scoring in the corner after Huddersfield coughed up possession on their own 30-metre line.

Next a grubber-kick from Sneyd was well anticipated by the onrushing Lafai, who was just able to touch down in the in-goal area before running out of room.

On the stroke of half-time, Salford were reduced to 12 men when Croft was sent to the sin-bin for obstruction.

With the hooter having already sounded, the Giants opted to go for goal and Russell was on target.

Huddersfield took advantage of their extra man with a try eight minutes after the restart as Hewitt won the race for a kick through by Theo Fages.

Despite being back to their full complement, Salford conceded again in the 51st minute.

Once again it was Hewitt, who did exceptionally well to ground the ball despite being on his back under pressure from two Salford defenders.

Salford were struggling to find their fluency of the first half, but Sneyd sent over a penalty from 40 metres to give them a 12-point lead with 16 minutes to play.

And they saw out the game with a Sneyd drop goal before Livett touched down their sixth try of the match.

Huddersfield return to action live on Sky Sports Arena on Thursday as they host Castleford Tigers (7.30pm on air ahead of 8pm start). with Salford travelling to Catalans Dragons next Saturday (6pm start).