We look at what is being said as a Grand Final rematch between reigning champions St Helens and League Leaders' Shield winners Catalans Dragons gets the 2022 Super League season underway, live on Sky Sports...

Woolf: Competition will ask us to be even better

Improvement. It is the mantra Kristian Woolf has preached ever since he first walked through the door at Totally Wicked Stadium.

That in itself was no mean feat given, when he arrived in November 2019, the Australian was taking over as head coach of a St Helens team his predecessor Justin Holbrook had just guided to a Super League Grand Final success.

Nevertheless, Woolf's side backed that up with another title triumph in the pandemic-affected 2020 campaign and followed that up last year by becoming only the second team of the Super League era to win the Grand Final three years running, along with lifting the Challenge Cup for the first time since 2008.

Short of adding the League Leaders' Shield to their collection this year - Saints finished second in the regular season in 2021 - it is difficult to see how much more the team can improve. But, as Woolf explains, his philosophy is more about making sure they keep one step ahead of their rivals.

"Obviously we want to back that up and love to have that success again," Woolf said. "If we're looking at outcomes, then a better year obviously includes the League Leaders' Shield as well. "Every team is trying to find ways of being a bit better and more consistent, and essentially teams want to be where we have sat for the past couple of years.

"For us to make sure we're in that position again, we're going have to have to make sure we are better again because that is what the competition is going to ask."

Can Dragons avoid another slaying at Saints?

Both clubs will line up in Thursday's season-opener at Totally Wicked Stadium with slightly different teams from the ones which took to the field for the Grand Final last October, with Saints having changed 10 of their 30-strong squad.

The departures of the likes of Lachlan Coote and Theo Fages means youth-system products Jack Welsby and Lewis Dodd will now have the opportunity to cement their places at full-back and in the halves long-term, having already impressed when afforded opportunities previously.

Welsby's opposite number on Thursday is set to be none other than the reigning Man of Steel and England international Sam Tomkins, and the 32-year-old Catalans star is looking forward to his battle with the man 12 years his junior.

"In terms of competing with him, I'm probably 10 years older than him, but he'll want to be the best full-back on the field and so will I. I'm sure we'll both be going at it equally."

Last year's 12-10 win for St Helens in the Grand Final was just as close-fought as some of their previous meetings in 2021, with the Dragons winning 20-16 in Perpignan and then winning a thriller at Magic Weekend 31-30 in golden point thanks to James Maloney's drop goal at St James' Park. 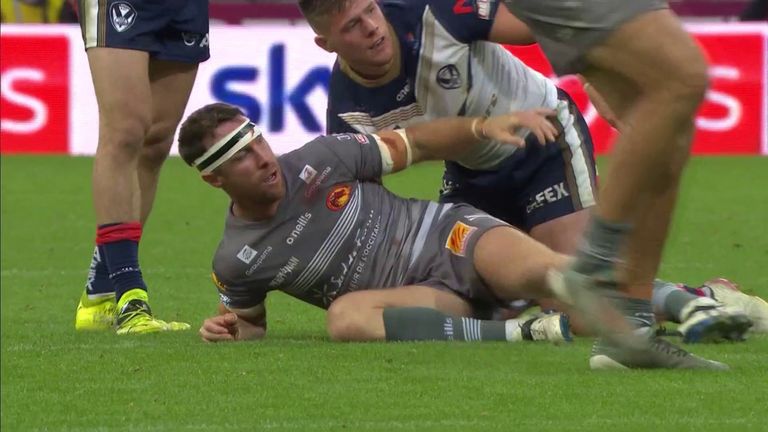 St Helens did, however, run out 34-12 winners - albeit against an under-strength Catalans side - on their own patch, where the French side have not won since April 2016. However, that holds no fears for Tomkins and his team-mates.

"Probably sick of hearing it, but they've been the benchmark for three years and they'll come out and be strong again, I'm sure," Tomkins said, adding: "But we know they're not unbeatable."

Off-season signings Will Hopoate, Joey Lussick, Curtis Sironen and Konrad Hurrell are all in line for their competitive debuts for St Helens, but fellow newcomer James Bell misses out on a place in Woolf's 21-man squad.

Newcomers Mitchell Pearce, Dylan Napa and Tyrone May are all included in Catalans' 21-man squad for the clash at Totally Wicked Stadium too. However, they are without French hotshot Arthur Mourgue due to an ankle injury.