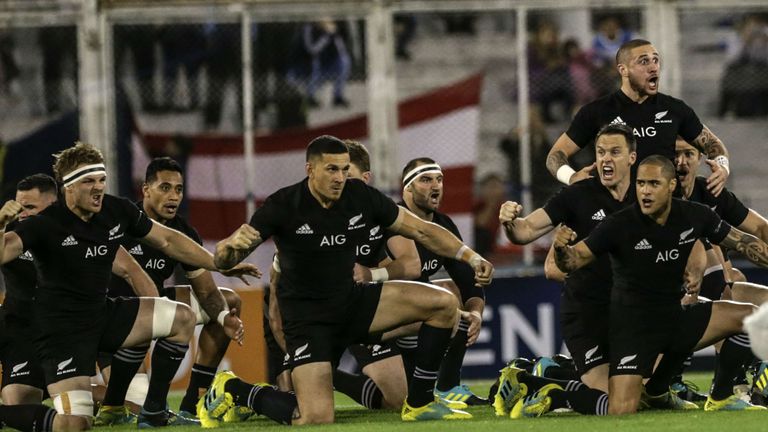 Steve Hansen's side put their loss to South Africa firmly behind them and made sure of the title with a round to spare.

The visitors to the Estadio Jose Amalfitani held a comfortable 21-3 half-time lead courtesy of tries from Rieko Ioane (2) and Waisake Naholo. Beauden Barrett was on target from the tee while Nicolas Sanchez scored the Pumas' only first-half points.

After the interval, New Zealand pressed further ahead before the home side clawed it back to 28-17. Seven minutes from time, Anton Lienert-Brown's try restored a hold on the scoreboard and the world champions finished the job.

New Zealand now travel to Pretoria for a final Rugby Championship encounter against South Africa, while Argentina will host Australia in Salta.

Argentina opened the scoring after just five minutes through the boot of Sanchez. The home fans were in fine voice but little did they know that the penalty would be their side's only points of the half.

Steve Hansen's team responded just two minutes later. After two earlier wayward lineouts, they found the front on the third and made the most of it.

The All Blacks let the ball do the work and their swift hands paid dividends. Naholo rode a tap-tackle well before fellow winger Ioane finished the job. Barrett nailed the conversion from the far touchline.

The Pumas' looked almost certain to cut the gap to a point, however, Sanchez missed a penalty that normally he would make.

New Zealand, famous for capitalising on opponents' errors, did so in order to deliver their second try of the game.

After an over-thrown lineout and a knock-on from Argentina, the visiting forwards went to work at the scrum. The dominance of the All Blacks' pack, an ever-present feature of the night, allowed TJ Perenara to get the ball away to Naholo and the winger crashed over. Again, Barrett converted.

Errors continued to thwart the Pumas' possession with knock-ons punctuating their fluidity.

Ioane's second try of the half came after he pounced on a loose ball. It required a trip upstairs to the TMO as he and referee Mathieu Raynal reviewed a contact in the build-up.

In the end, Codie Taylor's contact with Bautista Delguy, which caused the winger to spill the ball, was deemed to have been accidental. Barrett found the middle of the uprights with the conversion, Delguy left the field shortly after.

As the break approached, Argentina pressed their case and were handed a window of opportunity as Sonny Bill Williams saw yellow. The returnee from injury strayed offside and paid the price for multiple team offences.

Another handling error from the Pumas meant that they were not able to add any further points before the break.

Patrick Tuipulotu kept New Zealand's points tally ticking after a barren start to the second half. His 55th-minute try, converted by Barrett, extended their lead out to 28-3 before the Pumas regathered their thoughts.

Tries from Tomas Cubelli and Emiliano Boffelli wrestled the match back to an 11-point game with just over 10 minutes to play.

The inconsistency of the Pumas' set piece continued to hamper them, though. Seven minutes from time, Anton Lienert-Brown raced onto the end of Richie Mo'unga's chip through and the score sealed both the match, and sixth Rugby Championship title in seven years, for New Zealand.