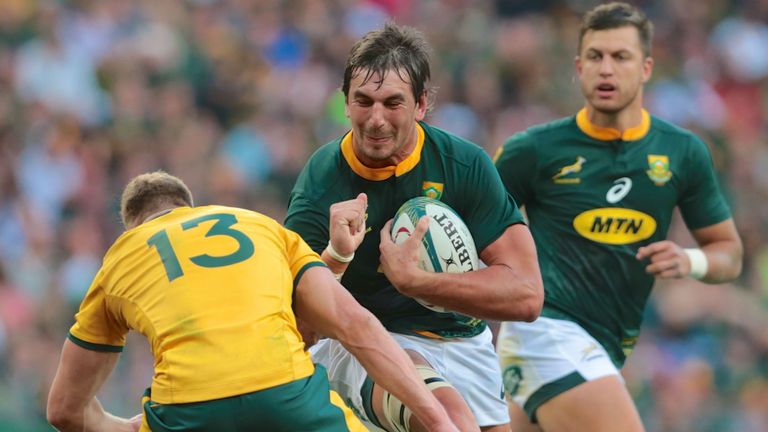 The Springboks beat Australia 23-12 in Port Elizabeth, but it wasn't enough to keep their Rugby Championship title ambitions alive.

Tries from Aphiwe Dyantyi and Faf de Klerk gave the home side an early 14-0 advantage, before the Wallabies made it a two-point game when Reece Hodge and Will Genia went over.

The boot of Handre Pollard allowed the Boks to end the first half 20-12 to the good, and Pollard's third penalty at the beginning of the second half was the last scoring act of the game as the South Africans held out for their third victory of the campaign, which left them two points adrift of New Zealand in the Rugby Championship standings.

However, the All Blacks went on to beat Argentina 35-17 later in the day, which was enough for Steve Hansen's men to lift the title for the third successive year.

The visitors got off to the worst possible start at the Nelson Mandela Bay Stadium when Dyantyi picked off a looping pass from Kurtley Beale right on the Australia tryline 26 seconds after kick-off, with the winger needing to make fewer than five metres with the ball to continue his impressive try-scoring form in 2018.

Matt Toomua had a chance to score his side's first points of the game from the tee shortly thereafter, but his first kick at goal went astray.

The Boks stretched their lead to 14 points when Pollard danced through the Wallaby defence before flicking a short pass to De Klerk in support for a try next to the sticks.

The visitors then hit back twice in quick succession, first when Hodge was put into space down the right touchline, then when Marika Koroibete got past Cheslin Kolbe on the other side of the pitch and found Genia on the inside to slash the Springboks' lead to just two points.

Pollard then added three points from the tee and although Toomua tried to match him, he missed again, before the South African fly-half's second penalty just before half-time put his side 20-12 ahead at the end of a frenetic first half.

The second half was bereft of that energy, with Pollard's third penalty six minutes into the second half the final bit of work for the scorekeepers.

The Springboks did leave the door slightly ajar when Dyantyi was shown a yellow card with 15 minutes remaining following repeated team infringements, but the Bok defence held out to keep them alive in the Rugby Championship, albeit with New Zealand poised to take the title.