Scotland 52-10 Italy: Home side destroy the Azzurri in Six Nations at Murrayfield

Scotland returned to winning ways in the Six Nations as an eight-try performance ensured a record-breaking 52-10 victory over Italy at Murrayfield.

The win was Scotland's first at home in the 2021 championship, having lost to both Wales and Ireland since beating England at Twickenham for the first time since 1983 in Round 1. 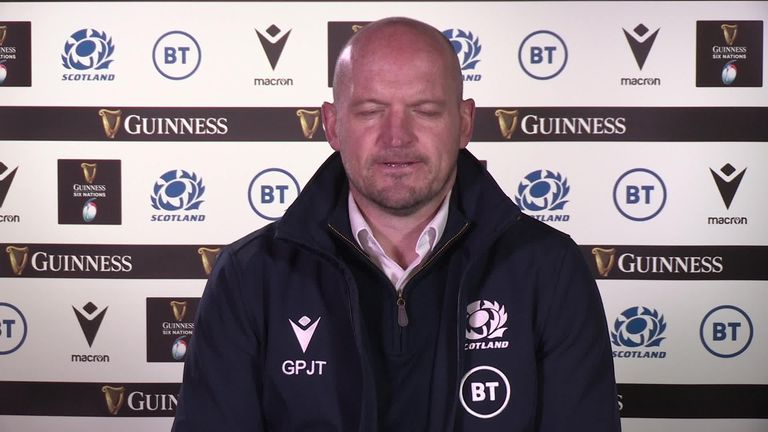 The Azzurri - who had three men sin-binned on the day and are now on a run of 32 straight losses in the Six Nations - made the perfect start via a Luca Bigi try in the corner for the lead after just five minutes.

Scotland responded quickly, however, with tries from hooker Dave Cherry and wing Duhan van der Merwe before the 15-minute mark.

On 20 minutes, Italy inside-centre Federico Mori was sin-binned for an illegal shoulder charge on Scotland's Sam Johnson, during which the visitors would concede two more tries.

Scotland took immediate advantage with a try through Darcy Graham in the 21st minute, and scored a second with Mori still off the pitch through centre Huw Jones.

Cherry notched his second try early into the second half, before Italy flanker Sebastian Negri and then wing Monty Ioane were sin-binned for repeated infringements and a tip tackle respectively, either side of a Scott Steele try. Sam Johnson and Van der Merwe completed the try scoring.

Scotland captain Stuart Hogg started at fly-half for the first time for Scotland as he filled in for Finn Russell, missing two conversions off the tee, while registering six more.

Scotland made a nightmare start as Bigi took advantage of some woeful maul defence to put Italy ahead after five minutes.

But the Scots roared back as Cherry squeezed over at the other end just four minutes later, with Van der Merwe then putting Townsend's team ahead after a fantastic drive up field.

Mori then saw yellow for a reckless shoulder hit on opposite number Johnson and Scotland were quick to exploit their temporary man advantage when Sean Maitland charged to within sight of the line.

Jones took over but was immediately pounced upon by Mattia Bellini before he could score. But there was no salvation for the Azzurri as Jones popped a pass off the ground for Graham to jog over.

Paolo Garbisi tried to take some pressure off his side by pinning the Scots down in their own 22 with a high kick - but the pace at which Townsend's team were playing was simply too quick for Franco Smith's men to cope with.

Van der Merwe chewed up ground down the left before passing to Hogg. His immediate offload to Jones caught Italy by surprise, with the Glasgow centre charging through a huge gap for another easy try as the Scots went in 24-10 up at the break.

The half-time whistle brought merciful respite for Italy - but it was only brief, as Cherry scored his second try with a carbon copy of his first, peeling off the base of a maul before diving for the line from close range.

Italy's troubles worsened again as Negri was given a stint in the bin for a deliberate knock-on, with scrum-half Steele - so impressive with his tempo around the breakdown - this time capitalising as he followed Johnson's quick dart towards the line to crawl over for try number six after 52 minutes.

By the time Negri was back on, Ioane had already headed past him as he was also sin-binned for a tip tackle on Hogg.

Johnson got a richly-deserved score with 15 minutes left as Scotland took a quick tap penalty, while Van der Merwe added his second in the 71st minute, careering through the Italian ranks to score from halfway.

The 52-10 final score was Scotland's biggest-ever winning margin in the Six Nations.