Australian blames illness in explaining his sudden departure from tournament

Nick Kyrgios stormed off court after losing the first set to Steve Johnson at the Shanghai Masters amid a chorus of boos.

Kyrgios had looked in physical discomfort but was also becoming irritated by the crowd, before calling it quits immediately after losing a tie-break to Johnson. He had earlier been deducted a point for the second consecutive match.

The incident comes three days after Kyrgios suffered a point penalty during his China Open final defeat to Rafael Nadal due to an ongoing argument with the umpire.

On Tuesday in Shanghai, Kyrgios had muttered that he would retire from the match if he lost a tie-break to decide the first set after becoming annoyed by the crowd. He was true to his words, as soon as Johnson won set point.

Earlier, Kyrgios had angrily blasted a ball out of the court after a video replay decision proved him correct. He was also hit by a point penalty and duly complained towards the umpire about the decision. 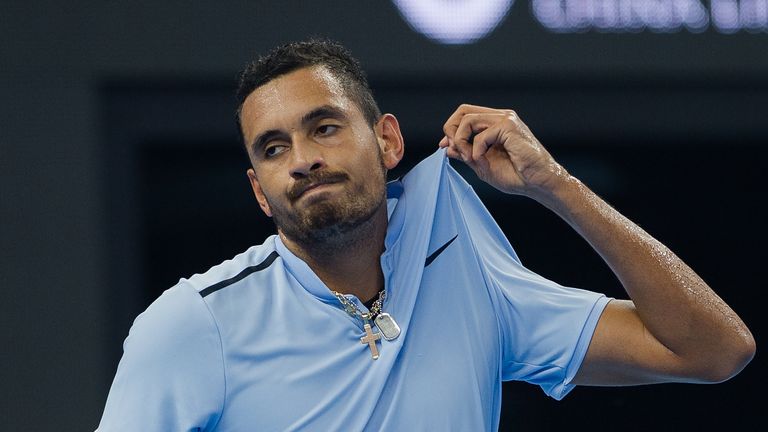 I'm gutted to be honest as I was keen to keep the good momentum that I built in Beijing going and finish the year strong. I'll do what I can to make sure I do

The 22-year-old Australian blamed illness in explaining his sudden departure, saying on Twitter: "Guys I want to apologise to the fans in Shanghai and those that watched around the world on TV today.

"I've been battling a stomach bug for the last 24 hours and I tried to be ready but I was really struggling on the court today, which I think was pretty evident from the first point.

"My shoulder started to hurt in the practice today, which didn't help either, and once I lost the first set I was just not strong enough to continue because I've not eaten much for the past 24 hours.

"I'm hoping to be okay for the doubles and will make a decision tomorrow morning, hopefully off of a good night's sleep, which I didn't get last night!

"I'm gutted to be honest as I was keen to keep the good momentum that I built in Beijing going and finish the year strong. I'll do what I can to make sure I do."

Just a little something to explain what happened in Shanghai today....#Sorry pic.twitter.com/V85qfrbixb

A year ago at the same tournament, Kyrgios 'tanked' his match against Mischa Zverev - walking off the court after a deliberately weak serve, before his opponent had even returned the ball. He was consequently suspended.

Sky Sports Tennis will have all the action from the Shanghai Masters before we head to the Erste Bank Open and Swiss Indoors Basel and then the Paris Masters.