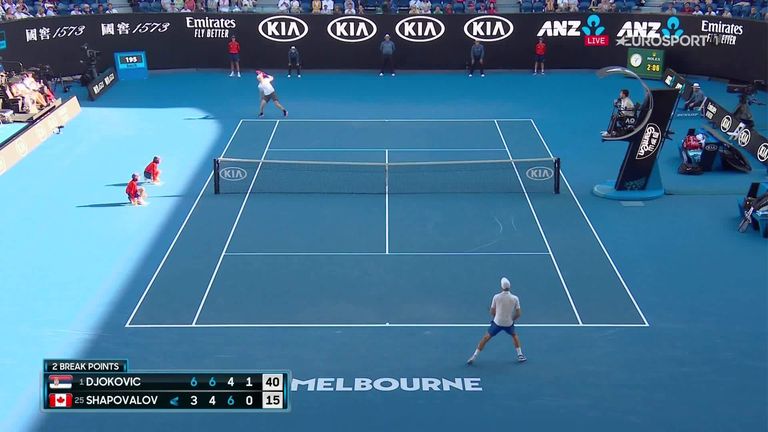 Novak Djokovic recovered from a drop in focus to defeat a tenacious Denis Shapovalov in four sets and maintain his charge for a record seventh Australian Open title.

The world No 1 appeared on course for a routine straight-sets passage into the fourth round after opening up a 4-1 lead in the third set but Shapovalov won five straight games against the increasingly riled Serb to extend the match.

But Djokovic reasserted his command by breaking the 19-year-old opening service game as he eased through the final set for a 6-3 6-4 4-6 6-0 victory to ensure he will remain world No 1 at the end of the tournament.

The 14-time Grand Slam champion broke Shapovalov once in each of the opening two sets to move into a dominant position in his first career meeting against the Canadian.

Djokovic appeared to then lose his focus after complaining to the umpire when the floodlights were turned on during the third set and Shapovalov took full advantage to force a fourth set.

"I think there was no sense to turn on lights on court at 5pm when we have another four hours of daylight," said Djokovic.

"Completely unnecessary to turn on the lights. The explanation I got was for TV reasons. I hope the viewers enjoyed it," he added.

But Shapovalov was unable to sustain his levels as Djokovic won six games on the bounce to set up a meeting with 15th seed Daniil Medvedev.

Alexander Zverev ended the run of Australian wildcard Alex Bolt to reach the fourth round of the season's opening Grand Slam for the first time.

The German fourth seed was taken the distance by France's Jeremy Chardy in the second round but conserved energy for the second week with a 6-3 6-3 6-2 victory to set up a meeting with in-form Milos Raonic.

The 2016 Wimbledon finalist, who knocked out former champion Stan Wawrinka on Thursday, advanced to the fourth round with a 6-4 6-4 7-6 (8-6) win against France's Pierre-Hugues Herbert.

The Japanese eighth seed had needed five sets to overcome big-serving Croatian veteran Ivo Karlovic in his previous match but was always in control against the Portuguese player.

Nishikori will next meet Pablo Carreno Busta next after the Spaniard defeated Italy's Fabio Fognini 6-2 6-4 2-6 6-4.

Borna Coric recovered from losing the first set against Filip Krajinovic to win 2-6 6-3 6-4 6-3 and the 11th seed will next meet France's Lucas Pouille.

Pouille had never won a main draw match in Melbourne before this year but despite making hard work of his opponent, who was watched by Australia Davis Cup captain Lleyton Hewitt, held his nerve to seal victory on his second match point - two sets after his first.

Asked about his new partnership with Mauresmo, Pouille said: "I am very happy that she is by my side now and we are doing some great work.

"Coming back from a year where I didn't win a lot of many matches so it has been difficult to find my confidence. I am just happy to have her - she has everything to bring me back to the top."

We have the Australian Open covered from all angles via our website skysports.com/tennis. On the move? Head to our app for mobile devices and iPad, or follow our Twitter account @SkySportsTennis to join in the conversation.