World No 1 Ashleigh Barty has been knocked out of the Rogers Cup in Toronto by American Sofia Kenin.

Barty entered the second-round match with a 3-0 record against Kenin but her opponent showed great fortitude to see off the challenge of the French Open champion and prevail 6-7 (7-5) 6-3 6-4.

Although the Australian rallied back from deficits in all three sets, and saved three-match points, Barty did not have enough to seal victory and pinpointed the potential reasons for that after.

"I think a little bit of rust, but I think just in general it was just a bit loose. I think at times I was missing by big margins, which is not something that I'm very used to or comfortable with," Barty said in her post-match press conference. 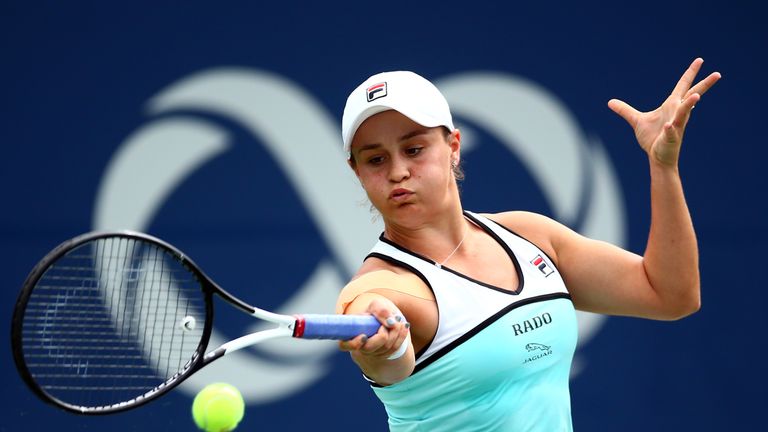 It's very different conditions here and different coming from home, training in winter at the moment, where the ball is a little bit lower and here it's quite lively and quick off the racket. And I think, all in all, I didn't adjust well enough or quick enough or adapt to the conditions how I needed to.

The loss puts Barty's world No 1 ranking in jeopardy and opens the door for Naomi Osaka or Karolina Pliskova to surpass her and take pole position.

Osaka starts her campaign in Toronto on Wednesday against Tatjana Maria while Pliskova is set to meet Alison Riske.

World No 1 Scenarios according to the WTA

If Naomi Osaka defeats Tatjana Maria in her opening match on Wednesday, there will be a new world No 1 on Monday.

Karolina Pliskova must advance to the semi-finals to have a chance at returning to No 1, however, if Osaka advances to the quarters, then Pliskova would need to reach the final.

In the event Osaka and Pliskova meet in the championship match, the winner would take home the title and No 1 ranking.

If Osaka loses her opener and Pliskova does not reach the semi-finals, Barty will remain at No 1.

The seventh-seed Sloane Stephens found the work of the Czech qualifier Marie Bouzkova too hot to handle on Tuesday as Bouzkova prevailed 6-2 7-5.

There are 83 places between them in the current world rankings, Bouzkova at 91st in the world and Stephens sitting in eighth, and the result marks the best win of the Czech player's career.

"I honestly still can't believe it. Coming through the qualies, I got comfortable on the court," Bouzkova said on-court after her victory.

"Today, I just tried to fight for every ball, and somehow, I got the win."

Bouzkova will meet now either Jelena Ostapenko or Anastasia Pavlyuchenkova in the Round of 16. Pavlyuchenkova also created an upset after defeating the ninth seed Aryna Sabalenka 3-6 6-3 7-5.

Elsewhere in the draw, Carla Suárez Navarro triumphed over Venus Williams for the first time since 2015 and progresses into the second round following their 6-4 6-2 encounter.

Suárez Navarro, who is playing in the Rogers Cup for the ninth time in her career, was able to keep her cool whilst 26 unforced errors came off the racket of Venus Williams.

Victoria Azarenka made light work of Camila Giorgi and needed just an hour and 12 minutes to secure a 6-2 6-2 result.

The former world No 1 is playing in Toronto for the first time in four years and next up for Azarenka will be 19-year-old Dayana Yastremska.

Meanwhile, a first meeting between Donna Vekic and Madison Keys was one to remember as Vekic saved three match points in the second set before going on to prevail 3-6 7-6 (7-5) 7-6 (7-5) in two hours and 29 minutes.

In the most anticipated match of the day, Bianca Andreescu and Eugenie Bouchard thrilled the sold-out crowd as the two Canadians duelled for just over two hours.

Bouchard took the first set before Andreescu put her foot down in the second and then was pushed hard in the third to secure the 4-6 6-1 6-4 win.

Post-match, the duo revealed that they were messaging each other on Instagram when they found out about the draw and vowed to "put a show out there" for the home crowd.

Andreescu will now meet the conqueror of Angelique Kerber, 22-year-old Daria Kasatkina, in the second round.

Wednesday's order of play will see Serena Williams and Simona Halep both commence their respective campaigns.

Serena Williams, who has won the Rogers Cup title three times and had a first round bye, will take on Elise Mertens on Centre Court.

Mertens goes into the match off the back of a 3-6 6-3 6-1 result against Aliaksandra Sasnovich and is looking for her first Top 10 victory since February.

Halep has qualifier Jennifer Brady standing between her and a place in the next round and the second seed Osaka is set for a duel with Maria.

The 18-year-old qualifier Iga Swiatek has the honour of being the youngest player remaining in the draw and she faces Caroline Wozniacki.

Swiatek should feel fresh for this second round meeting too after her first outing on court lasted just 20 minutes after Ajla Tomljanovic retired.