Andy Murray and Feliciano Lopez saved a match point before going on to beat Marcelo Melo and Lukasz Kubot in the first round of the Rogers Cup in Montreal.

Murray and Lopez, who took a wildcard to enter the competition, were on court for just under two hours as they shocked the second seeds with their 6-7 (7-5) 6-3 11-9 victory.

The winners of the Fever-Tree Championship at Queen's Club rekindled their much-loved partnership in style and it was Lopez who saved the match point in the deciding tie-break through a booming ace.

"Whenever I play with Andy, it's a lot of fun," said the Spaniard after the duo's hard-fought victory.

"Today was very special as well. I think we deserved the win because we played well overall."

The draw doesn't get any easier for the partnership though as they will now meet the French Open finalists, Jeremy Chardy and Fabrice Martin on Thursday.

Elsewhere in the doubles draw, Jamie Murray and Neal Skupski found themselves on the wrong end of the result against fellow Briton Joe Salisbury and his American partner Rajeev Ram.

Salisbury and Ram prevailed 7-5 7-5, winning 88 per cent of their first-serve points and putting down six aces to Murray and Skupski's one.

In the singles draw, Dan Evans set up a first-ever meeting with Rafael Nadal after his straight-sets victory over Alex de Minaur.

Evans took the first set 6-4 but was pushed much harder in the second and was forced into a tie-break.

Dan Evans' climb back up the rankings

After Nick Kyrgios' victory at the Citi Open in Washington, you could have forgiven Kyle Edmund for feeling a little intimidated by their first-round meeting but in fact, Edmund handled the match and the rain well.

The Brit closed out the first set 6-3 in just 29 minutes as Kyrgios found himself frustrated and annoyed by the match towels and not having the right one despite asking for it.

After the Australian spoke so openly about taking strides forwards following his victory in Washington, his outburst and the code violation for an obscenity during his frustration, will perplex many.

Edmund did not let Kyrgios' actions derail his focus and instead based his own work on an impressive serving display - winning 92 per cent of first-serve points and throwing down 15 aces.

The 6-3 6-4 win or the Brit means that he will now meet the eighth seed Daniil Medvedev in the second round.

This one hurt, but it was amazing to be back in Montreal at @couperogers! Merci a tous 🙏🙌🇨🇦 et bonne chance pour la suite @felixtennis #battle #moments 😎 pic.twitter.com/ASkoht41UZ

As was the case in the women's tournament in Toronto, one of the most hotly-anticipated matches on Tuesday happened between two Canadians as Felix Auger-Aliassime and Vasek Pospisil met.

Auger-Aliassime, who is playing in his home-town tournament, showed maturity beyond his 18 years to secure a 6-2 6-7 (7-3) 7-6 (7-3) victory and will have that maturity tested again in the next round against Milos Raonic. 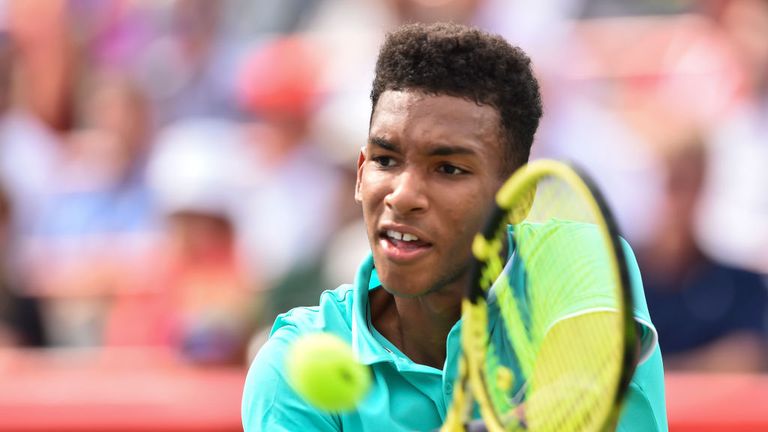 When your back is against the wall, you usually show up with something good. I think in any case in life, that's what you do. If you look at a lot of players, especially great players, whenever they need to, they usually play good points, serve well. I think I found that extra energy in me to serve well those four points and get that game.

Raonic won the only previous meeting between the two, at Indian Wells back in March 2018, but Auger-Aliassime believes he has progressed since then.

"Even if I look at myself physically back then, I changed a lot. Mentally, as well," noted the 18-year-old.

"For sure I have the confidence that I can win against these types of players. I'm not as nervous stepping on these big courts."

After a tough tussle in the first set, Alexander Zverev went on to secure a straight-sets 7-6 (7-4) 6-4 result against Britain's Cameron Norrie and that books his place in Round of 16.

Wednesday's order of play will see Nadal and Evans take to Centre Court first at noon local time and their clash will commence a packed day of tennis.

The all-Canadian clash between Auger-Aliassime and Raonic is third on Centre with Denis Shapovalov and Dominic Thiem sandwiched in the middle.

On Banque Nationale, Edmund's second-round match against Medvedev will take place after Richard Gasquet and Kei Nishikori have duelled.

Lopez and Murray will also enjoy the delights of that court late in the day with the Bryan brothers and the sixth seeds Henri Kontinen and John Peers also in doubles action.