Zverev to meet Dominic Thiem in last four on Saturday, while Roger Federer will face Stefanos Tsitsipas in other semi-final encounter in London

Defending champion Alexander Zverev defeated Daniil Medvedev to reach the semi-finals of the ATP Finals at the expense of year-end world No 1 Rafael Nadal.

The world No 7, who needed victory to reach the last four of the season-ending championships, won 6-4 7-6 (7-4) in the final match of the round-robin stage at the O2 Arena in London.

Zverev, who beat Novak Djokovic to win the title last year, will face Austrian Dominic Thiem in the semi-finals on Saturday, with Nadal's back-to-back comeback wins against Medvedev and the already-qualified Stefanos Tsitsipas proving fruitless.

Nadal would have faced long-time rival Roger Federer in the last four had Medvedev, who he beat in a thrilling US Open final in September, won for the first time in Group Andre Agassi.

Zverev, who impressively defeated Nadal in his opening match against Nadal before a lacklustre display against Tsitsipas on Wednesday, broke Medvedev in the opening game of the match.

The German was assured behind his serve before he recovered from 0-30 to close out the first set in just over 35 minutes as the match struggled to match the drama of other encounters this week.

Serve continued to dominate into the second set before Medvedev demonstrated resolve to save a break point with an ace to hold for a 5-4 lead.

But Medvedev, who last won a match the Shanghai Masters last month, remained unable to gain any foothold on Zverev's serve and the German maintained his record of not facing a break point in the match to bring up a tie-break.

Medvedev held the early mini-break advantage but Zverev recovered with the help of some accurate baseline hitting to seal victory with an ace on his first match point.

Stats of the match

Zverev: This is where I play my best tennis 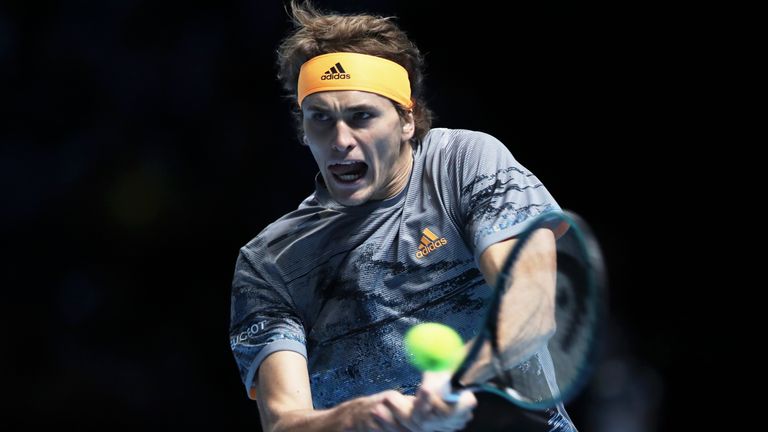 I'm in the semis again, this arena is where I play my best tennis. We don't play in this atmosphere anywhere else in the world. Today because Daniil had nothing to lose he could just enjoy it, but for me it was must-win. He's been the best player since the summer so all credit to him, it's been an unbelievable season for him. Next year he's going to be very dangerous as well

Zverev will now face world No 5 Thiem in the second semi-final, with the Austrian having already beaten Federer and Novak Djokovic this week.

Earlier, six-time champion Federer will face Stefanos Tsitsipas in what will be a repeat of their Australian Open fourth round encounter, which the Greek won.

Check our news, reports and reaction at the ATP Finals in London by following us on skysports.com/tennis, our app for mobile devices or our Twitter account @skysportstennis.