Andy Murray lost in straight sets against veteran Spaniard Fernando Verdasco in the first round of the bett1HULKS Indoors ATP event in Cologne.

Murray had played at the French Open for the first time in three years following a return to the court after battling hip problems, but lost his first-round match in straight sets to Stan Wawrinka.

The veteran Scot was handed a wildcard in Cologne, but was soon up against it as Verdasco, a former world No 7, broke twice to lead 4-1.

Former world No 1 Murray rallied to break back before he found his serve under pressure again from Verdasco, who was forced out of contention for the French Open following a positive Covid-19 test.

After saving three break points, Murray recovered to win the game and reduced the arrears to 4-3, but Verdasco continued to keep the pressure on as he held to move within one game of claiming the opening set.

The 36-year-old Spaniard was, though, made to work for it as Murray forced a break point before then saving two set points.

After another break chance, Murray finally succumbed as Verdasco took the first set 6-4 after almost an hour.

Verdasco, ranked 61 in the world, forced the first break of the second set, only for Murray to respond immediately and level at 2-2.

Murray was broken again in the seventh game, with Verdasco appearing to close in on victory when he set up a match point on the Briton's next service game.

The Scot, though, showed he has lost none of his competitive determination to battle back and hold at 5-4 down. Murray then rallied once more to push Verdasco from the back of the court as he forced three break chances and then saved two match points, the second when coming to the net.

It was, however, only delaying the inevitable as Verdasco eventually served out for the match, progressing 6-4 6-4 after one hour and 40 minutes.

Murray reached the second round of the US Open in September but remains outside the world's top 100.

Earlier in the day British No 2 Kyle Edmund was also eliminated in the first round after being beaten 7-5 7-6 (7-1) by South African qualifier Lloyd Harris.

Both players lost their opening service games before Harris, ranked 92 in the world, moved 4-2 ahead and then was up 5-3.

Edmund, defeated by world No 1 Novak Djokovic in the second round at the US Open, rallied to break back and level at 5-5. 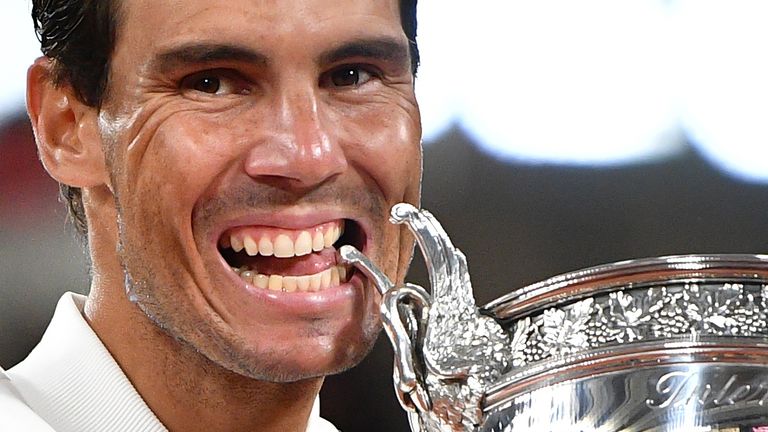 Nadal says 'it means a lot' to equal Federer's record

However, the 25-year-old Briton then lost his own serve again to hand the advantage back to Harris, who finally wrapped up the first set after an hour and five minutes. The second set went with serve and on through to a tie-break.

Harris swiftly put himself in control with a mini-break and two holds before Edmund lost his serve again.

The South African, 23, soon set up a match-point chance at 6-1, which he claimed as the Briton hit a backcourt return into the net.