The 25-year-old, who took time out of the game just a few years ago for her mental health, came out on top in a see-saw contest that was the first Wimbledon women's final to go into a deciding set since 2012.

After winning the opener and leading the second set 3-1 against a nervous Pliskova, Barty served for the title at 6-5, only to see her opponent hit back and win a tie-break to force a decider where Barty held herself together to prevail and achieve a place in history.

how it started: how it’s going: pic.twitter.com/CBkVRuxYgS

She adds the Wimbledon title to the French Open crown she won in 2019 and just as significantly, 50 years on from Evonne Goolagong-Cawley's first Wimbledon crown, Barty made good on her pledge to emulate the legendary seven-time Grand Slam champion.

Paying a fitting tribute in the scalloped skirt she has worn throughout the fortnight, Barty emulated her idol - who blazed a trail for the same Australian indigenous population Barty represents - and became the first Australian woman to win the singles title since Goolagong-Cawley's second success in SW19 in 1980.

It also cements Barty's status as the world No 1 and completes a Wimbledon journey that started when she lifted the junior title aged 15 in 2011 and has included three exits at the qualifying tournament - most recently in 2016. 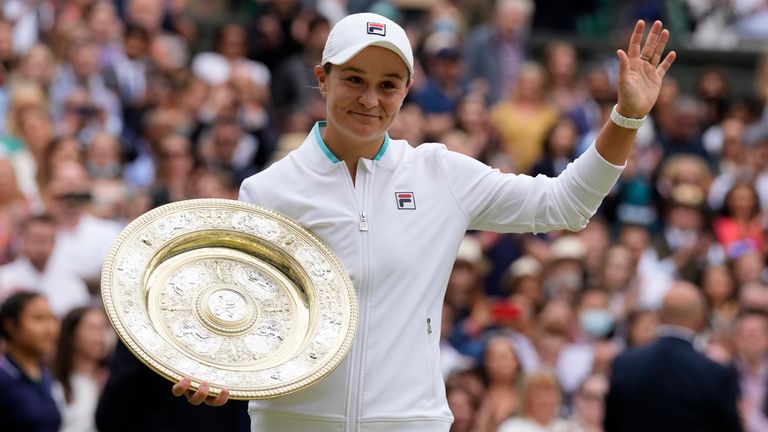 "Being able to live out my dream here with everyone here, it's better than I ever could have imagined.

"I didn't sleep a lot last night and I was thinking of all of the 'what ifs' but coming out on this court, I felt at home in a way.

"Being able to share all of that with everyone here and with all of my team, that's incredible."

For the first time in more than 30 years the two finalists were both competing in their first Wimbledon final, and there were more similarities given neither player had been beyond the fourth round at the Championships before this year, both had won junior Grand Slam titles and both had been in one major singles final.

And it was Barty - a winner in Paris in 2019 - who settled first with Pliskova, a runner-up in New York in 2016, struggling with early nerves befitting the huge stage they were on.

Mindful of her 5-2 advantage in the head-to-head stakes, and having held serve with ease, Barty broke Pliskova to love with a couple of first-class winners to stamp her early authority on the contest.

Could not be happier for you @ashbarty - huge congratulations on your @Wimbledon title and enjoy every second 🤗🏆 pic.twitter.com/LqX4zYEjYh

Remarkably, the Australian took her run of successive points to 14 as Pliskova struggled to get anything going and it wasn't until 3-0 and 0-30 down that she registered her opening point of the match when Barty dumped her backhand into the net.

More break points followed, and having saved one Pliskova handed her opponent a 4-0 lead with a double fault as a weapon that had been the hallmark of her run to the final wilted in the opening set.

Pliskova had lost just a solitary set en route to the final and faced with the reality of losing a second - she broke Barty to love but the Australian hit straight back.

The pair had spent the morning practising together on Court No 1 as the covers had prevented either of them getting onto the other courts, but nerves were in evidence as a third successive break of serve gave Barty the chance to serve for the opening set.

Errors were creeping into the Australian's game and with Pliskova beginning to find her range she first broke back and then held onto her serve for the first time to draw back within touching distance at 5-3.

Nerves finally subsided as a more composed Barty - who had withdrawn from the French Open with a hip injury last month - bossed the eighth game and when Pliskova's wild forehand sailed long the top seed was halfway towards the title, but the drama was only just beginning.

A fourth break of the Pliskova serve was not far away, and a pair of double faults, combined with a leaden-footed forehand into the net, seemed to put the writing on the wall for the Czech, who trailed 3-1

Just as she had done in the first set, Pliskova attempted to hit herself into the contest and after conjuring her first ace of the match - having hit 50 en route to the final - a sparkling forehand return set up three break points which Barty handed to her when she fired into the net.

Roared on by the crowd, and showing more emotion than she usually does, a fired-up Pliskova produced her biggest serve of the match on her way to a 4-3 lead before she handed the initiative back to her opponent.

At 5-5 and 40-0 Pliskova's casual volley saw a game point go begging, and three more errors gave Barty a break of serve and a chance to serve for not just the set but the match and the title.

However, the Australian had nerves of her own and Pliskova drew level after the second set somehow went into a tie-break. Plsikova then got the better of the key moments in the middle of the breaker to forge an advantage that Barty could not overturn.

An early break of the Pliskova serve set the tone for the final set, as Barty stayed rock solid on her own game to forge a 3-0 lead in a matter of minutes.

A couple of routine holds each - completely out of keeping with an unpredictable contest - took Barty to the brink of the title once again.

Having served for the title at 6-5 in the second set, Barty was in the same position at 5-3 but this time she held her nerve, only after dumping a volley into the net that gave Pliskova a first break point of the decider.

When the Czech fired long, Barty served up her seventh ace of the match for a first Championship point.

When Pliskova fired into the net, Barty crouched to the ground, the tears evident as she joined the legendary figures of Margaret Court and Goolagong-Cawley as Australian winners of the women's singles title.