Raducanu, 18, becomes the first British woman to win a Grand Slam singles title since 1977, the new British No 1 and claims the $2.5m winner's cheque in just her fourth senior tournament; Raducanu did not drop a set in three matches of qualifying and seven main draw contests

Emma Raducanu's history-making three weeks in New York got the ultimate fairytale ending as she beat fellow teenager Leylah Fernandez 6-4 6-3 to win the US Open and become Britain's first female Grand Slam champion since 1977 - and the first qualifier, male or female, to win a Grand Slam title.

Just a couple of months ago, the 18-year-old from Orpington was sitting her A-Levels but a remarkable run - in a remarkable women's tournament - that started in first round qualifying against Bibiane Schoofs on August 25, ended with her lifting the trophy without dropping a set in 10 matches and losing just 34 games.

A spectacular contest had time for a dramatic twist, when Raducanu - at 30-40 down and serving for the title - was forced to endure a medical time-out to clean up a cut to her knee as Fernandez, fresh from saving two Championships points in the eighth game on her own serve, attempted to launch a comeback. 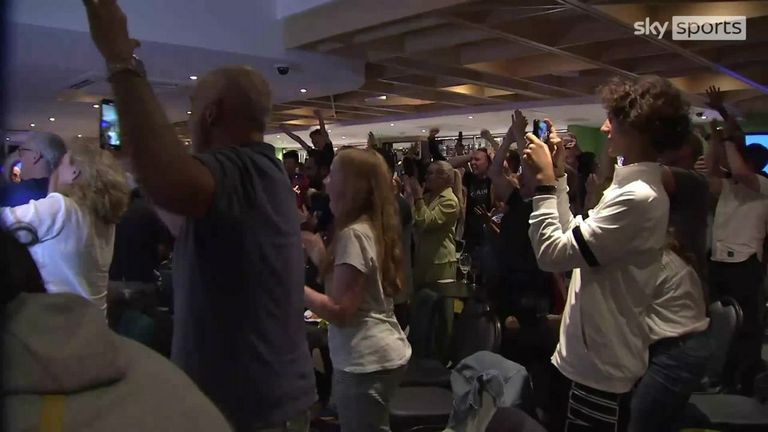 But Raducanu was not to be denied, a third Championship point arrived and she underlined her barely-believable story with an ace to seal victory in 1 hour and 51 minutes of spellbinding action.

As well as the title - in just her fourth WTA Tour level event and second Grand Slam - she will now rise an astonishing 127 places in the world rankings on Monday, taking over as the British No 1 and ranked world No 23.

Three months on from a run to the last 16 at Wimbledon that ended when she was forced to retire with breathing difficulties, it was the remarkable Raducanu that left the 23,500 sell-out crowd and the millions watching breathless with a performance, title and story for the ages.

"I want to congratulate Leylah and her team on an incredible fortnight, she's beaten some of the best players in the world and it was a difficult match with a high level. I hope we can play each other in many more tournaments and hopefully finals," said Raducanu, who was making her US Open debut, playing in just her second main draw Grand Slam and first on foreign soil.

"As for the three weeks in New York, having such a supportive team, my coach, the fitness team, Will, my agent, the LTA - everybody that is here and everyone watching back at home thank you so much

"Most of all thank you to New York for making me feel so at home, from my first qualifying match, all the way to the final I have loved playing in front of you and you have spurred me on in some difficult moments.

"Somehow I fell and I thought that would throw me off balance as I was going to have to serve, I was just praying not for a double fault, but we got through it!"

“Leylah is always going to play great tennis, that’s the competitor that she is and that’s why she’s in the final – I knew I would have to dig deep.<p>“It shows the future of women’s tennis and the depth of the game is so great – I think every single player in a women’s draw has a chance of winning any tournament.<p>"I hope the next generation can follow in the steps of some of the greatest legends – like Billie Jean [King] here and everyone at the top of the game now."

Teenage superstars serve up a treat

After an emotional opening ceremony, that featured a fitting tribute to the victims of the 9/11 attacks 20 years on from the attacks on New York, a sell-out crowd settled in for their landmark final on the magnificent Arthur Ashe Stadium.

Raducanu and Fernandez had battled their way through the draw, ranked 150 and 73 in the world at the start of the fortnight, leaving behind a trail of former Grand Slam champions and the reigning Olympic champion, to become the first unseeded players in the Open Era to contest a major final.

In only the fourth all-teenage women's US Open in the Open Era, nerves might have been expected, however, the pair were anything but in the early exchanges.

Raducanu had dropped serve just five times in the whole tournament and after holding impressively to get the contest underway she was handed three break points on the Canadian left-hander's opening service game.

Fernandez saved the first three, but Raducanu has forged endless opportunities on her opponent's serve in New York and three more followed in a pulsating start which eventually yielded a 2-0 lead after 14 thrilling minutes of action.

Revelling in the occasion the pair served up another gruelling game, Fernandez hitting straight back to halt a run of 19 consecutive holds from the Brit in an edgy service game from Raducanu.

As the match settled, they shared the next six with Raducanu playing the more aggressive tennis but Fernandez's defence making for an enthralling match-up.

Raducanu hadn't lost more than three games in her opening set since the final round of qualifying, and hadn't played more than 51 minutes for a set in any of her main draw contests and the final's opener was her toughest test, but yet again she rose to the challenge.

Fashioning four set points on the Fernandez serve - the first break points by either player since the third game - she saw her fellow teenager dig deep to fend of the first three before a fizzing forehand winner sealed the first set in 58 spellbinding minutes.

The pair had met on one previous occasion, the junior Wimbledon second round three years ago, where Raducanu had won in straight sets. Having taken her consecutive set tally to 19 in New York in her barely believable run she stood five games from history when she held comfortably to open the second set.

A feature of Raducanu's run has been her ability to seize her moment, pouncing at the merest hint of weakness from her opponent and Fernandez presented her with three break points only to showcase her own battling qualities that have been her own hallmark.

Having rattled off five straight points to save the break, it was the Canadian's chance to turn aggressor as she bossed Raducanu's service game for the first time to take the lead in the second set - hardly surprising given she had seen off three of the world's top five to make her maiden Grand Slam final.

However, Raducanu was coolness personified, breaking back, then holding serve and firing off sizzling winners from both wings to fashion more break points before crunching a quite spectacular forehand winner for a pivotal 4-2 lead.

Emma Raducanu - Route to the US Open Final

The Queen of Queens

A fired-up Raducanu powered her way through her own service game to leave Fernandez at the point of no-return and what followed was a combination of adrenaline and class to take the Briton to a pair of Championship points on her opponent's serve.

A battle-hardened Fernandez had won the deciding third set in each of her last four matches to reach this stage and she wasn't about to go down without a fight.

In keeping with the contest the Canadian saved both Championship points, piling the pressure onto Raducanu's serve and fashioning a break point of her own that threatened to take the match into a third hour.

However, that was the cue for the final drama to play out, the match held up when the Brit needed the trainer to tape up a cut to her knee, much to Fernandez's annoyance, and while there was still time for a final see-saw to proceedings, Raducanu's moment arrived.

After a hugely uplifting fortnight, where teenagers have lit up the tournament, it was Raducanu who emerged triumphant when her perfectly placed serve left Fernandez with no answer and the Brit collapsed to the floor with her head in her hands.

Her straight sets success making her the youngest Grand Slam champion since Maria Sharapova at Wimbledon in 2004 and the first US Open champion since Serena Williams in 2014 to win the title without dropping a set.

There have been stories at every turn over the last two weeks in New York with another to come when Novak Djokovic chases a history-making calendar year Grand Slam, but Saturday's spectacular events might just be the biggest this or any sport throws up for some time.