Eugenie Bouchard forced to retire from Aegon International at Eastbourne

Eugenie Bouchard was forced to retire midway through her third round match against Belinda Bencic at the Aegon International at Eastbourne.

The world No 12 was trailing 6-4 3-0 when the trainer was called to treat an abdominal injury before she decided to curtail the match early and hand 18-year-old Bencic the win.

Last year’s Wimbledon losing finalist has had a difficult start to the grass season with her solitary victory being in the previous round at Eastbourne where she won in straight sets against American Alison Riske.

The Canadian, who has now won only two of her last 12 matches, was thoroughly outplayed by the world No 31 in the set and a half she did contest.

Despite being forced to pull out, Bouchard insists she will be fit to play at Wimbledon next week.

"I'm going to play no matter what, even if I'm on one leg. I'll take a few days off from serving and give it a little break and see how it goes," she said.

"It's been a rough time for me these past couple of months, for sure, with my tennis, coaching changes and a couple of injuries here and there. I know it will turn around and things will start going my way soon.

"I'm looking forward to going back to Wimbledon, of course. It was the highlight of my career so far. Hopefully I can make more highlights like that." 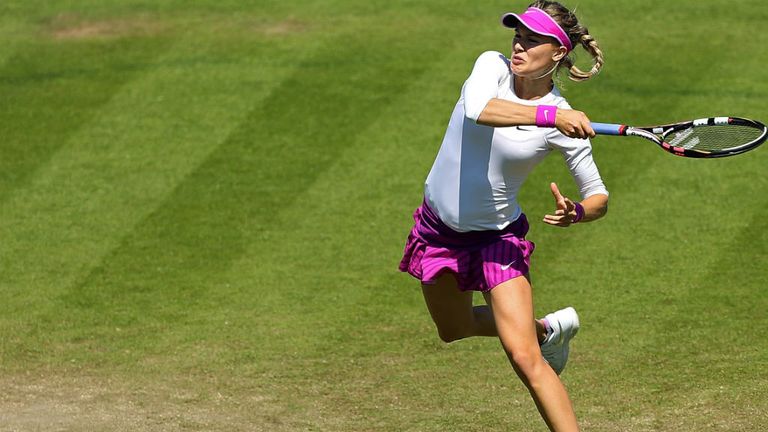 I'm going to play no matter what, even if I'm on one leg. I'll take a few days off from serving and give it a little break and see how it goes.

Eugenie Bouchard will play at Wimbledon

Switzerland's Bencic will now play Johanna Konta in the quarter-finals after the Briton caused another upset by beating world No 19 Garbine Muguruza of Spain in three sets.