Australian Open 2020: Alex De Minaur out of tournament through injury

"Even though it killed me, this is the right decision"

Alex De Minaur has been forced to pull out of the Australian Open with an abdominal injury.

The 20-year-old, who is ranked 21st, suffered a muscle tear during Australia's ATP Cup campaign, where he played four intense matches, including a three hour-and-24-minute defeat by Britain's Dan Evans and a three-set tussle with Rafael Nadal.

Alarm bells rang when De Minaur withdrew from this week's Adelaide International because of the injury, and he has been unable to recover in time for his home grand slam.

The Australian No 1 said: "It's pretty devastating to miss out on my home slam. I wanted to go out there and play, even though I've got a four centimetre, grade two tear, so it's not a joke, it's something really serious.

"Obviously everyone was telling me not to play and it is the smartest thing. Getting out of bed hurts, everyday activity hurts.

"The risks of me potentially playing was that it could get to a grade three tear, which involves stitches and means probably a problem for the rest of your career. So, even though it killed me, this is the right decision. Now I've just got to look at what's ahead."

Unfortunately Australian No.1 @alexdeminaur has withdrawn from #AusOpen 2020 with an abdominal injury. pic.twitter.com/R6p8TGbkOc

De Minaur initially felt a problem during his second match of the ATP Cup against Canada's Denis Shapovalov and sat out Australia's victory over Greece.

But he returned for the quarter-final against Britain, playing not just the long singles encounter against Evans but also the deciding doubles, and he began to feel the abdominal issue again during his defeat by Nadal.

This was the first edition of the ATP Cup and De Minaur's misfortune will raise more questions about the wisdom of having a big, intense event so close to a Grand Slam. 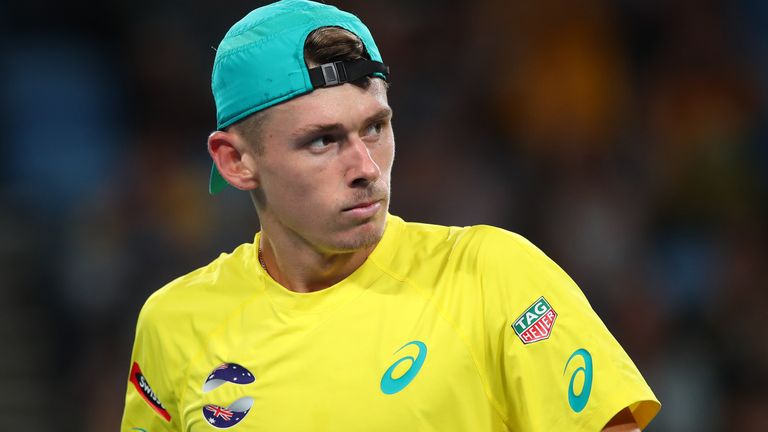 I wanted to go out there and play, even though I've got a four centimetre, grade two tear, so it's not a joke, it's something really serious.

He said: "I certainly prepared for the amount of tennis played but going in you always knew it was going to be tough, especially looking at my schedule. I had some gruelling matches.

"It's just playing for your country, it's a different feeling. I'm going to do everything to leave it all out there."

Serbian Dusan Lajovic is now the No 24 seed while former Wimbledon finalist Milos Raonic moves up to the No 32 seed.