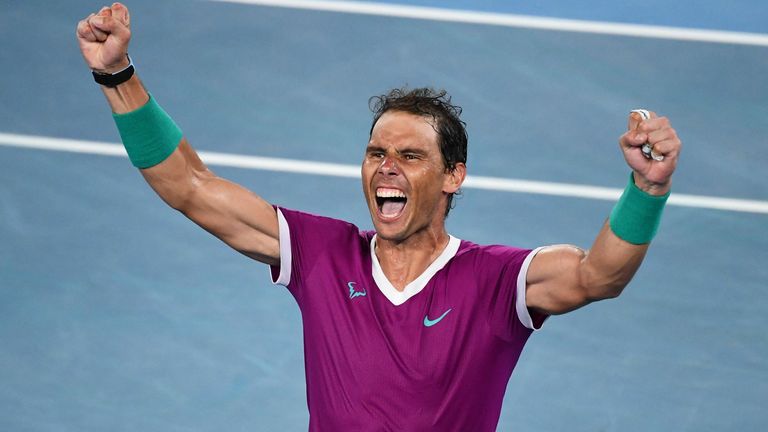 Rafael Nadal hailed his Australian GP title as "the most unexpected" achievement of his illustrious career after a remarkable comeback against Daniil Medvedev clinched a Grand Slam record.

Nadal now holds 21 major titles and has surpassed Roger Federer and Novak Djokovic, who were both quick to congratulate the Spaniard on a feat he didn't think was possible amid retirement fears just months before the tournament due to a chronic foot problem.

"The most unexpected, without a doubt," Nadal said of his title after an exhausting and exhilarating match, which finished at 1.11am local time.

"And most surprising I think for everyone." Nadal, who faded in earlier rounds and was playing in just his 10th match since early August, admitted he was "not ready physically for these kinds of battles" and that he "didn't practice enough to be ready".

But he added: "I gave it everything that I have inside, believe me. I am super, super tired in all ways. I even can't celebrate.

"At the end, to have this trophy with me means everything today."

Incredibly, it was the first time Nadal had recovered from two sets down to win a match since beating Mikhail Youzhny at Wimbledon in 2007

"The way that I achieved this trophy tonight has been just unforgettable, one of the most emotional matches of my tennis career, without a doubt," he stated. "It means a lot to me."

Medvedev, who was looking to follow up his maiden US Open title by becoming the first man in the Open era to win the next major as well, said his record-breaking opponent was "unreal" after going two sets down.

"In the fifth set, I was like, 'make him run'. He was unreal. He was really strong, like the way he played, at four hours I was even surprised.

"But, of course, we know how Rafa can play. He didn't play for six months. He told me after the match that he didn't practice so much. It was unreal."

Nadal's win was also praised by the two men he was previously level on 20 Grand Slam titles with.

Federer and Djokovic hailed their great rival as an "inspiration" and "amazing" as they offered heartfelt congratulations after the Melbourne classic.

"What a match!" posted Federer, who is recovering from injury, on his Instagram story. "To my friend and great rival Rafael Nadal, heartfelt congratulations on becoming the first man to win 21 Grand Slam singles titles.

"A few months ago, we were joking about both being on crutches. Amazing. Never underestimate a great champion.

"Your incredible work ethic, dedication and fighting spirit are an inspiration to me and countless others around the world. I am proud to share this era with you and honoured to play a role in pushing you to achieve more. As you have done for me for the past 18 years.

"I am sure you have more achievements ahead but for now enjoy this one!"

Djokovic had denied Nadal in the 2012 final - the first of two finals between the pair in the event - which remains the longest in the history of the Melbourne Park tournament despite Sunday's efforts.

While the Serb was unable to defend the title he won in 2021 due to his visa being cancelled, he talked up the performance of the two finalists.

"Daniil Medvedev gave it his all out there and played with the passion and determination we have come to expect from him."