Barty: "Obviously we'll have a couple of quiet days now to relax, to celebrate and then set new goals."

Ashleigh Barty intends to keep "chipping away" at becoming the next world No 1 after winning her first Grand Slam singles title at the French Open.

The 23-year-old Australian was the class of the field in Paris, defeating Czech teenager Marketa Vondrousova 6-1 6-3 in the final on Saturday.

Barty climbs to No 2 in the rankings, only 136 points behind top-ranked Naomi Osaka, and with her favourite part of the season - the grass - to come next.

She said: "Being number two in the world is incredible. It's something I never dreamt of as a child and obviously we'll keep chipping away and try our best to get to number one.

"A goal of mine this year was to try to crack the top 10. And then it was chipping away trying to get top five.

"It's all happened pretty quickly over the last two weeks but we're trying to take it in our stride. Obviously we'll have a couple of quiet days now to relax, to celebrate and then set new goals."

It is well documented that Barty's path to the top has not been linear.

Marked out as a future star very young, she won the Wimbledon junior title aged 15, but the pressure and the lifestyle took its toll. By 18, Barty had had enough, and she stepped away from the sport for nearly two years, trying her hand at professional cricket and enjoying being a normal teenager.

In 2016, she decided she was ready to return to the court and the journey that has now carried her to a Grand Slam title began at a small tournament in Eastbourne three years ago this week.

Barty is always quick to credit the team around her for her success, and her coach, Craig Tyzzer, has been by her side ever since she returned to tennis. 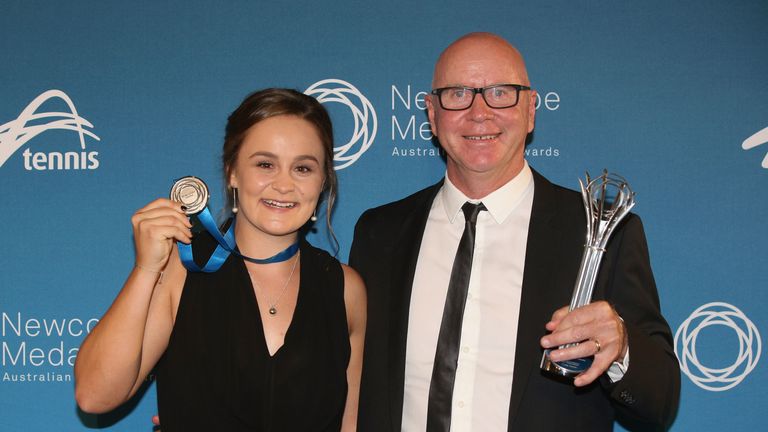 It doesn't matter how much talent you have, you get to this level and you've got to work your butt off, and Ash does.

"It doesn't matter how much talent you have, you get to this level and you've got to work your butt off, and Ash does," he said.

"We're continuing to improve lots of areas in Ash's game, both on and off the court, and I think it's really shown this year.

"And we're not going to stop. In this game you can't sit still and she knows that. Her feet are firmly planted on the ground.

"You only have to look at the age of the girls who got through here. It just shows the depth in women's tennis, which is great."

The irony of Barty winning her first slam singles title on clay is that she had previously looked at this part of the season as something to be endured before she could get onto the grass.

When Wimbledon begins in three weeks' time, Barty will be the player to beat.

"She's a clay-court specialist now so I don't know if she's the favourite on grass any more," joked Tyzzer.

"We came into this tournament not expecting too much, just working on each match and trying to get through as far as we could, and she made it all the way.

"We'll do exactly the same thing. Nothing will change for Wimbledon. She's not going to sit on her laurels and think she's going to win these matches easily or on reputation."

We will have the grass-court season covered via our website skysports.com/tennis On the move? Head to our app for mobile devices and iPad, or follow our Twitter account @SkySportsTennis to join in the conversation.