Emma Raducanu: New British No 1 through to US Open final against Leylah Fernandez

Emma Raducanu through to US Open final against fellow teenager Leylah Fernandez; 18-year-old becomes first qualifier in history - man or woman - to reach a Grand Slam final and is first British woman to reach a Slam final in 44 years, since Virginia Wade in 1977 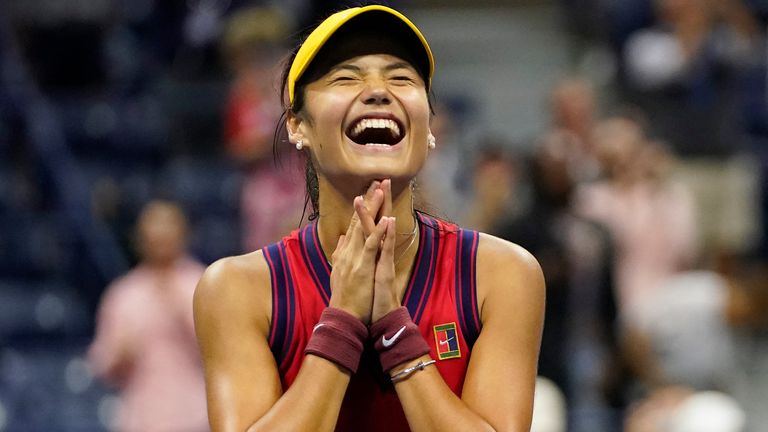 Britain's Emma Raducanu continued to rewrite the history books as she became the first qualifier ever to make a Grand Slam final, sweeping into Saturday's US Open final where she will play fellow teenager Leylah Fernandez.

The 18-year-old qualifier from Kent defeated Greek 17th seed Maria Sakkari 6-1 6-4 to set up the first all-teen final at the US Open since 1999, before either was born, when a 17-year-old Serena Williams beat an 18-year-old Martina Hingis.

Raducanu had only just sat her A-Levels when she reached Wimbledon's fourth round in July, but she has exceeded all expectations by storming into the final at Flushing Meadows without dropping a set - winning 18 consecutively and dropping just 27 games in her six main draw matches.

She said on court: "Honestly, the time here in New York has gone so fast. I've just been taking care of each day and three weeks later I'm in the final. I can't actually believe it.

"Today I wasn't thinking about anyone else except for myself. While I have the moment, I want to thank my team and the LTA and everyone at home for all their support.

"Since I've been here from the first round of the quallies, I've had unbelievable support."

As for her chances in the final? "Is there any expectation? I'm a qualifier so technically there's no pressure on me," she added.

Despite causing a massive upset to knock out reigning Olympic champion Belinda Bencic in the last round, going up against experienced Sakkari was expected to be her toughest test yet under the lights of Arthur Ashe Stadium on primetime TV in the States.

The fast-rising star, who will be installed as British No 1 next week, took advantage of a nervy start from Sakkari to surge through the opening three games, with one of the heaviest hitters on the WTA Tour failing to take any of her seven break-point chances.

The opening set was turning into a nightmare for Sakkari when she double-faulted to put Raducanu in total command, with the possibility of a bagel set. But the Greek, who came one point away from reaching her first Slam final at the French Open before losing it to eventual champion Barbora Krejcikova, held serve in the sixth game to get on the board.

However, Raducanu soon closed it out to make it an astonishing 17th successive set won in New York and close in on a place in history.

With an error-strewn Sakkari feeling the heat, Raducanu took full advantage by moving a break up in the third game of the second set with some flawless shot-making.

Sakkari saved five break points during a marathon nine-minute hold in the seventh game, but Raducanu stayed composed on serve to close in on victory.

And she held serve for a remarkable 47th time during her sensational run all the way from qualifying to make it through to Saturday's final and her improbable march towards sporting immortality.

She is one match away from becoming the first British female winner at Flushing Meadows since Wade in 1968.

Raducanu will move into the world No 32 spot after reaching the final and can climb to No 24 if she wins the title. The 18-year-old entered the tournament ranked No 150.

On Monday, she will take over as the No 1 British woman.

Teenager Fernandez made it through to Saturday's final after a dramatic three-set victory over Aryna Sabalenka.

Fernandez, who turned 19 on Monday, sealed a stunning 7-6 (3) 4-6 6-4 victory against the world No 2 to follow in the footsteps of fellow Canadian and 2019 winner Bianca Andreescu by making it through to the women's singles final as a teenager.

Fernandez, ranked 73 in the world, has laid waste to a who's who of women's tennis this fortnight.

The left-hander has now overcome two-time US Open champion Naomi Osaka, 2016 winner Angelique Kerber, world No 5 Elina Svitolina, and she added second seed Sabalenka to her scalps in making it through to her maiden Grand Slam final.

She said on court: "I have no idea how I won. I want to say thanks to the New York crowd, they helped me today and never gave up. Thanks to them I was able to win.

"I just wanted to be in the final and I fought for every point. I don't know how I got that last point in but I'm glad it was."