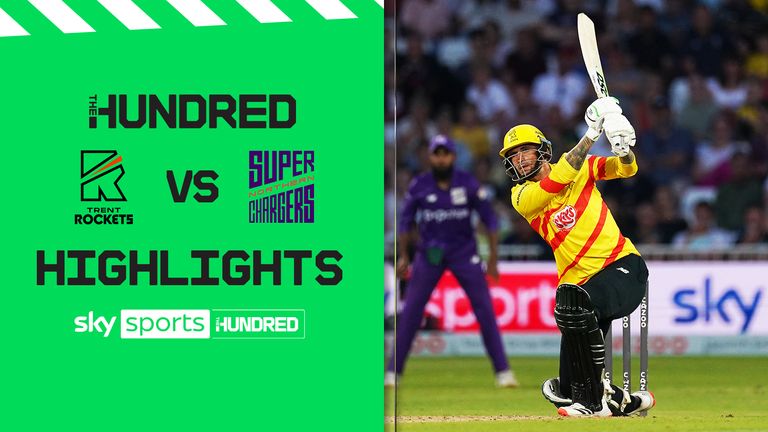 Alex Hales smashed an unbeaten 40 from 34 balls as Trent Rockets completed a dramatic turnaround to squeeze past Northern Superchargers by two wickets in the Hundred.

Northern Superchargers skipper Ben Stokes - making his last appearance prior to joining up with the Test squad - chose to bat after winning the toss, but his side failed to see out their full 100-ball allocation and were bowled out for 132.

Apart from a stand of 61 runs in 40 balls between John Simpson (42 from 33) and Harry Brook (38 from 30), the visitors failed to build partnerships and struggled against Rockets' spin attack.

Matt Carter, called into the side after Steven Mullaney was forced to isolate due to Covid protocols, set the tone with his spell of 2-17 and Afghanistan star Rashid Khan finished with 3-31, while seamer Marchant de Lange registered 3-22.

And what a two, with Malan and Root both out for 0 to their England team-mate! 🦆🦆

GAME ON AT TRENT BRIDGE! #TheHundred 💯

But Adil Rashid (2-27) grabbed two wickets in as many balls - those of England team-mates Dawid Malan and Joe Root, both for ducks - and with fellow spinners Mujeeb Ur Rahman and Callum Parkinson also taking two apiece, the Rockets looked doomed at 58-6.

While wickets tumbled around him, however, Alex Hales remained in an unaccustomed anchor role - and Rashid Khan (25 from 12) and Carter (13 not out from eight) provided him with enough support to see his side over the line.

Stokes, however, was left to rue not only letting a Hales drive slip through his hands for six - but also opting for pace in his penultimate set of five, with the Rockets opener smashing David Willey for an enormous six to wrap up a two-wicket victory.

Arguably a dead ball proved to be the turning point, with a pitch intruder halting play and compelling Adil Rashid to bowl again to Hales, who was then on 16 with Superchargers still favourites for victory.

The Rockets opener promptly heaved Rashid to long-off - where Stokes, fielding on the boundary, allowed the ball to slip through his grasp and go for a six that reignited the home side's hopes.

Rashid Khan's contribution with both bat and ball was significant - as well as taking three wickets to restrict the Superchargers to 132, the Afghanistan star also showed just why he ought to be taken seriously as a genuine all-rounder.

Adil Rashid came in for some punishment, conceding a six and two fours in his final set as the batter's knock of 25 from just 12 balls kept the Rockets within touching distance.

But Matt Carter must have run him a close second - his powerplay bowling put the Superchargers on the back foot and he also shone with the bat, thrashing Willey for six as he and Hales guided the home side to a thrilling victory.

Superchargers' spinner Callum Parkinson, who had just been clobbered for six by Samit Patel, took immediate revenge by pitching one up, tempting the batsman to drive and edging behind to leave the Rockets deep in trouble at 36-4.

MAKE THAT 6️⃣ WICKETS DOWN!

The left-armer then returned to the attack to dispatch Lewis Gregory - whose 14 from eight deliveries was beginning to threaten a fightback - getting the ball to skid through a little faster and bowl the Rockets captain as he swung across the line.

Rockets' Rashid Khan deserves a mention as well - he replicated his familiar T20 role, coming on straight after the powerplay and immediately produced a beauty that foxed Adam Lyth, bowling the left-hander around his legs.

It was very much Marchant de Lange's day when the Rockets got their campaign off to a winning start, making Hundred history by becoming the first player in the tournament to complete a five-wicket haul.

The South African seamer did the business again with the ball, picking up another three wickets - including two in as many deliveries - as the Superchargers' innings stuttered late on.

A dive for the crowd, Samit? 🤣#NorthernSuperchargers losing regular wickets at the end of their innings #TheHundred 💯

However, there was also a forgettable moment for de Lange, who misjudged the spin on the ball when John Simpson square drove Joe Root and ended up groping hopefully at thin air as it whizzed past him en route to the boundary.

"It was an interesting innings and one that's going to stay with me for a long time! I just couldn't get any momentum at any point but I managed to hang in there and cash in at the end.

"They bowled really well at the start and I hit a lot of fielders. We were losing a lot of poles but we got there eventually.

"At this ground, you're never out of the game chasing, it's such a fast outfield. I felt if we could take it as deep as we did, we could cash in with the death bowling.

"I just said(to Matt Carter) 'enjoy it mate, whatever happens'. He played a gem of an innings as well and struck it cleanly from ball one which was what we needed."

"If you have someone like Hales in at the end he can win games from anywhere. You always know he can switch up a gear, which is what he did at the end.

"For the majority of the innings we thought we had the game in the bag but we didn't bowl as well as we could at the end.

"We thought our total was competitive, a bit under par but we have some exceptional spinners in the side and they really squeezed it in the middle and we thought from that point we should have defended it.

"But as the old saying goes, catches win matches and the one that Ben dropped changed the momentum and we couldn't quite get over the line." 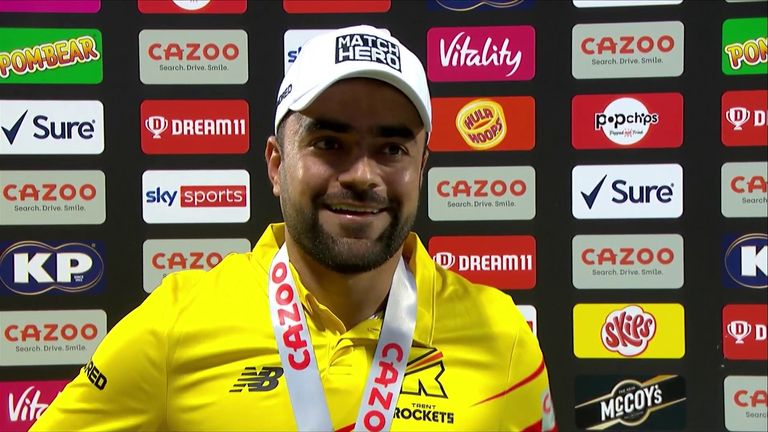 "It was the maddest 20 minutes I've ever had on comms! It just had everything, didn't it?

"I thought the Superchargers were in control of the game, then Ben Stokes dropped a catch that you'd never have seen him dropping and from that moment the Rockets took off, so to speak!

"For Alex Hales to finish it that way on his home ground, sweeping a six into the crowd was pretty awesome."

The Hundred roadshow hits Cardiff for the first time, with Welsh Fire aiming to singe their visitors from Southern Brave!

The women's teams gets things under way at 3pm, followed by the men's fixture at 6.30pm.

Watch both games on Sky Sports The Hundred and Main Event, as well as the Sky Sports Cricket YouTube channel.