Northern Superchargers become first side in The Hundred to score 200; John Simpson blazes 71 from 28 balls as 29 runs come off Steven Finn's set of five; Originals awful in the field as their play-off hopes dented and Superchargers boost own top-three hopes 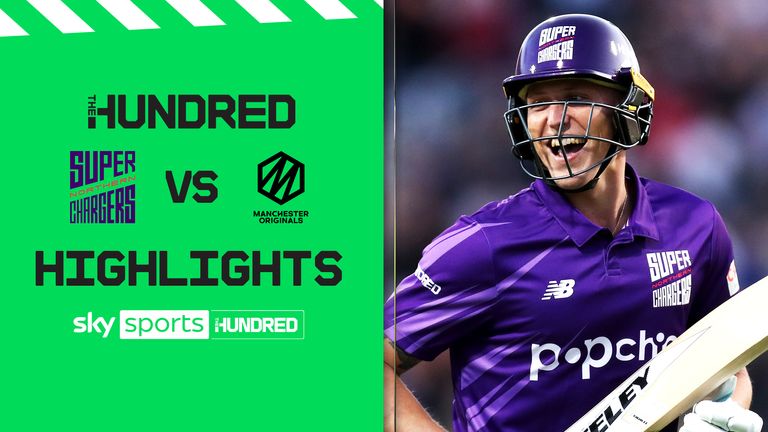 It was an absolute demolition job - Northern Superchargers piling on the first score of 200 in The Hundred as they crushed rivals Manchester Originals at Emerald Headingley...

STORY OF A STAGGERING MATCH

It finally happened - 200 was hit in The Hundred for the first time as Northern Superchargers piled on the runs against a Manchester Originals side who fielded atrociously and then made only 131 all out from 99 balls in reply as their run rate took an absolute battering.

Needing a win to stay in the play-off hunt, and with key batters Adam Lyth and Harry Brook missing due to testing positive for Covid-19, Superchargers ran riot, with John Simpson (71 off 28 balls) in blistering form.

Yes, 2️⃣0️⃣0️⃣ is hit for the first time in #TheHundred as Carse slams final-ball four 😱

Simpson with 71 of 28 balls; Originals with endless fielding errors! 🤯

Simpson annihilated Steven Finn as the bowler was taken for 29 runs between balls 91 and 95 in a madcap set of deliveries, featuring boundaries, wides, no-balls and a dropped catch as Finn went on to concede a staggering 51 runs from his 15 deliveries in the innings.

Dropped catches were par for the course for Originals who suffered a dreadful case of butterfingers in front of a passionate Headingley crowd, with Matt Parkinson dropping two absolute sitters.

The magical 200 was secured from the final ball of the innings as Brydon Carse carved Lockie Ferguson away through backward point.

Superchargers' total of 200-5 smashed the previous highest score in The Hundred out of the water. That being the 184-5 Birmingham Phoenix had plundered against Welsh Fire at Edgbaston. 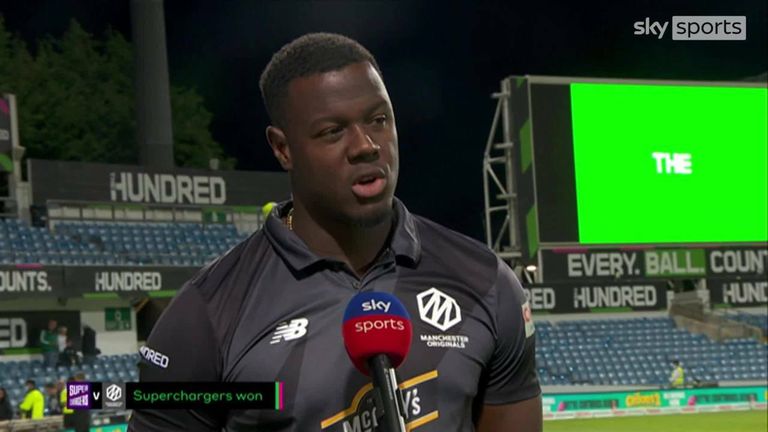 Originals have power in their batting line-up but did not get close to Superchargers' monster score, as the hosts fielded and bowled exceptionally, with seamers David Willey (3-15) and Ben Raine (2-25) and spinners Adil Rashid (2-28) and Mujeeb Ur Rahman (1-17) impressing with the ball.

As days go for Superchargers, they could not have hoped for anything better!

Simpson was quite brilliant. The wicketkeeper-batter came to the crease after 65 balls with Superchargers - who were inserted by Originals skipper Carlos Brathwaite - handily placed, you'd say, on a score of 106. Once he hit the seventh ball he faced for six, he was well and truly away.

Brathwaite and Ferguson were hit for fours as Simpson reached 40 from 19 balls - and then it all kicked off as he came up against his Middlesex team-mate Finn. There was only one winner.

Six over mid-wicket and four to square leg earned him a 21-ball fifty - the joint-fastest in The Hundred. Then he went four through extra cover and then four more off an edge as Finn bowled a no-ball above waist height.

The free hit was then whipped down to fine-leg for four and, after Finn bowled a wide, the final ball of the set of five - which turned out to be the seventh delivery - was pushed onto the boundary by Tom Lammonby as he attempted to take a catch off a Simpson pull. Utter carnage.

Simpson hammers Hartley into the stands - where the epidemic of dropped catches has spread! 🤦#NorthernSuperchargers 🟣 #ManchesterOriginals ⚫ #TheHundred 💯

HOW HAVE THEY DROPPED THOSE?!

We saw too many drops on Thursday night in Leeds - starting with Darren Gough and Lydia Greenway in our pre-match catching demo!

Originals players Phil Salt and Parkinson spilled a couple of goobers early in the Superchargers' innings. Firstly, wicketkeeper Salt grassed a chance running back towards the boundary after pulling rank on Parkinson at short third man as both eyed catching Tom Kohler-Cadmore's skied pull.

It looked like Parkinson's catch all the way - but we perhaps saw evidence of why Salt went for it a few balls later when Parkinson spilled an even easier opportunity at short fine leg after Willey went on the pull. It was a comical few moments, not that bowler Brathwaite was amused.

OK, perhaps Salt was right not to leave it to Parkinson! 🤯

The appalling fielding continued throughout and Parkinson, bless him, grassed another dolly from the 97th ball of a staggering innings as he backpedalled from short fine leg. As the ball went up, everyone in the crowd could sense it had a real chance of hitting the turf - and it did.

SUPERCHARGERS ALMOST FAULTLESS IN THE FIELD

Originals had a shocker in the field - save for Calvin Harrison, who took a smart grab while off balance on the boundary to cut off Chris Lynn's innings on 15 - but Superchargers were very slick.

He nailed it with the bat and now he has starred with the gloves, taking the nick that removes Munro #TheHundred 💯

Simpson, who had a right day out, took excellent catches behind the stumps to remove Colin Munro and Brathwaite off the spinners.

Plus, Kohler-Cadmore - called into the Superchargers side with Lyth and Brook absent - claimed a quality diving grab at long-on to get rid of Colin Ackermann, and Rashid ran out Tom Hartley with a direct hit.

Matt Potts shelled a catch late in the game at deep mid-wicket but Kohler-Cadmore clung on to the next delivery at extra-cover as the unfortunate Parkinson was last man out.

Manchester Originals captain Carlos Brathwaite: "I felt everything they touched turned to gold and everything we touched we messed up. I have never seen so many dropped catches that go for boundaries as well. We got beat by a better team. It was an embarrassing performance.

"They had their 12th man of the crowd and I'm not sure everyone was able to handle the pressure and noise as we should have. To be honest, we crumbled. Chasing 200, 99 per cent of the time you are going to lose." 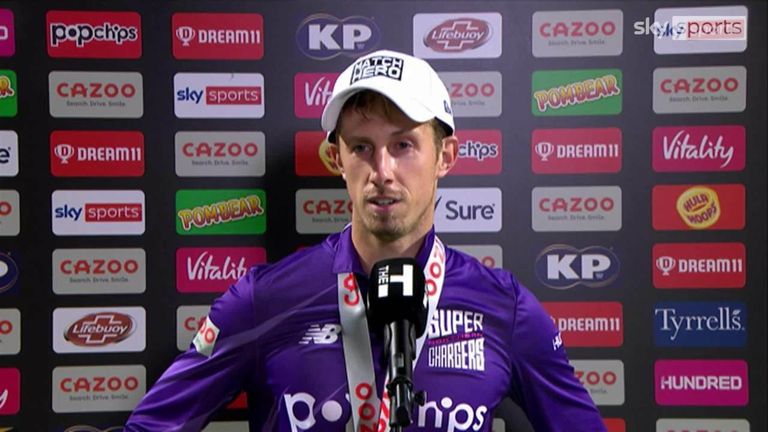 Northern Superchargers captain David Willey: "It was pretty close to a complete performance. Every game is must-win for us and to put on a show like that in front of a full house was fantastic.

"Simpson has got everything - batsmanship and power - and hopefully he carries that on for the rest of the competition. Everyone was a bit excited at halfway but we did the basics well [with the ball and in the field]."

The men's game (live from 6.30pm on Sky Sports Mix) pits two high-flying teams against each other, with the winner moving to the top of the table with one group game to play.