How has football changed? Possession is no longer nine-tenths of the law Spain created tiki-taka, but possession does not give you the success it once did

If 2008 was the birth of possession football, 2016 saw the confirmation of its death.

There were several funerals. Leicester were the special guests, Atletico Madrid and Italy too, all showing how incessant ball retention does not guarantee you victory like it once did.

More recently at the Stade de France on Sunday, an unfancied Portugal snatched Euro 2016 off hosts France, despite seeing little of the ball in their four knockout wins.

Football has changed in the past eight years, a time in which Barcelona's 'defend with the ball' dominance under Pep Guardiola transformed into another successful style under Luis Enrique, full of quick transitions and clinical attacking.

It was also a period in which Spain dominated the international stage with tiki-taka, monopolising the ball on their way to two European Championships and a World Cup. 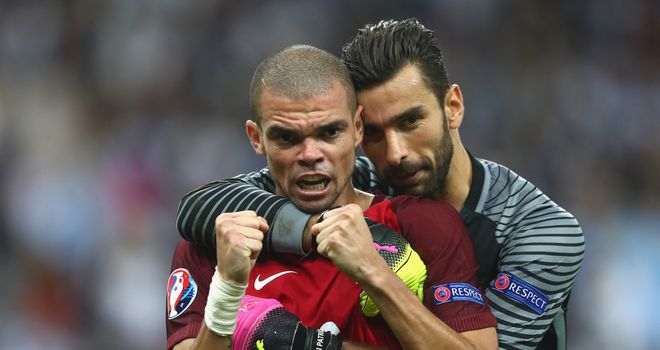 Portugal won just one game in normal time at the Euros

In Paris last month, they were beaten 2-0 in the Euro 2016 last-16 by an Italy side who had just 40 per cent possession, two years after an embarrassing group-stage exit at the World Cup despite having over two-thirds of possession against the Netherlands (lost 5-1) and Chile (lost 2-0). Where Barcelona redefined their identity, Spain did not.

Hours after Spain's defeat, Roy Hodgson's England were humiliated by Iceland, who held less than a third of the ball in Nice. Euro 2016 was a microcosm of the tactics shift over the past two years, a four-week window into just how much football has waved goodbye to tiki-taka. 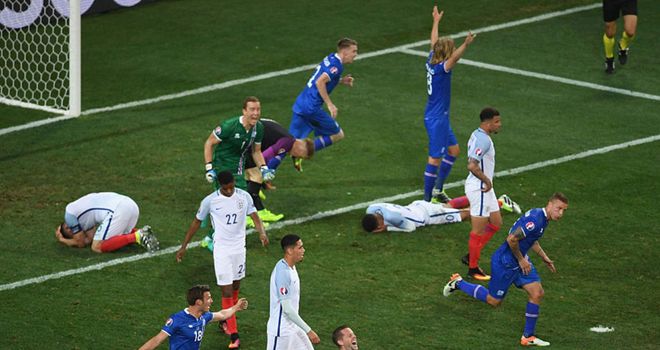 England had a wealth of possession in their four Euro 2016 games, but won just one game

Take Hodgson's England for a close-to-home example. Four games with 52, 70, 61 and 68 per cent possession, all against lesser opposition, yielded just one victory. For once, criticism of England's exit focused not on the player pool or the squad's technical quality, but their lack of innovation on the ball and even sharper mental flaws when the pressure rose.

It fell into Iceland's hands, just as it did for Wales, Portugal and Italy. They knew the opposition would want control of the ball, and favoured disciplined, powerful, workhorse midfielders over finesse and technique. It may have contributed to what some have described as a dour tournament, but it worked. The shift was becoming apparent in Brazil two summers ago, just after Atletico won La Liga and reached the Champions League final with a hard-working unit which rarely saw the ball. At the 2014 World Cup, 16 teams (25 per cent) won with less than 45 per cent of the ball, and that trend has continued into 2015 and 2016. 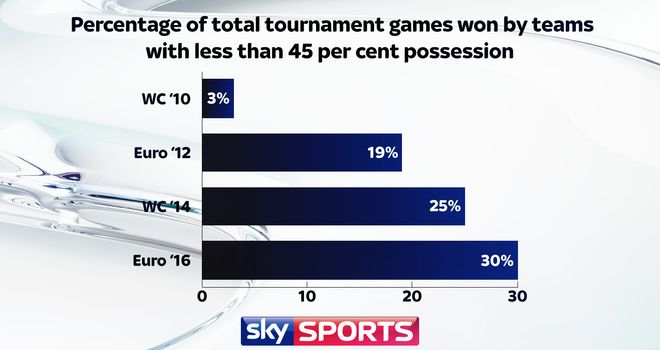 Possession is no longer nine-tenths of the law, and Arsene Wenger agrees.

"Possession is not rewarded like it was before," he said after Arsenal's 2-1 win over Manchester City in December.

"It's the first year in the Premier League where possession doesn't give you as much. I keep my philosophy, but I'm also an observer and I go through the stats of every game at the moment. I am trying to understand; is it something new, is something happening that was not going on before?"

Arsenal had 37 per cent possession at the Emirates that night, a win that meant they topped the Premier League at Christmas. Next up were Southampton away, where Ronald Koeman's side had 35 per cent of the ball and won 4-0. Arsenal's title challenge was ended in the spring months with defeats against Manchester United (who had 39 per cent possession) and Swansea (37), as well as draws with Stoke (45), Southampton (33), West Ham (39) and Crystal Palace (28).

"You must not overrate the amount of possession," said interim Chelsea boss Guus Hiddink in February, just as everybody started to believe Leicester could win the title.

"Most teams want the ball. What do you do with it? Say we had 65, 67 and 70 per cent possession but our opponents said: 'We don't care, we have the score on our side.' Do you secure your way of playing? Or do you go as soon as possible into the attack? I prefer the latter option. The first thought must be vertical."

Statistics from the last 10 years of the Premier League show a dramatic change in use of the ball and just how many sides are happy to let the opposition have a go. And why not let them?

Leicester won the Premier League from 5,000/1 doing so, and their style will rightly go down as one of the most brutally effective in English top-flight history. Admittedly, Leicester got it spot on while entertaining, their front six providing the right balance of skill, speed, directness and power. 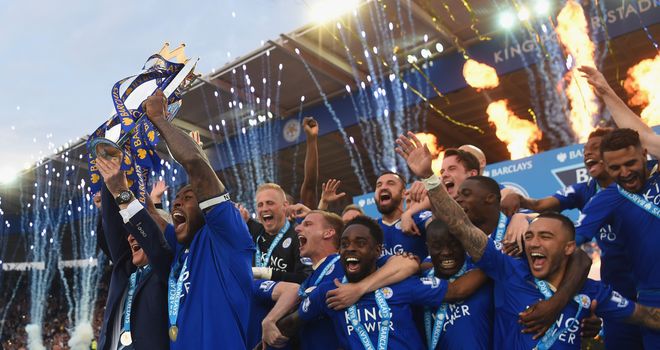 Atletico, too, are thrilling to watch in bursts, but not every team adopting this style are as easy on the eye. Pleasant or not, will we see more of it in the Premier League? It is certainly heading that way. 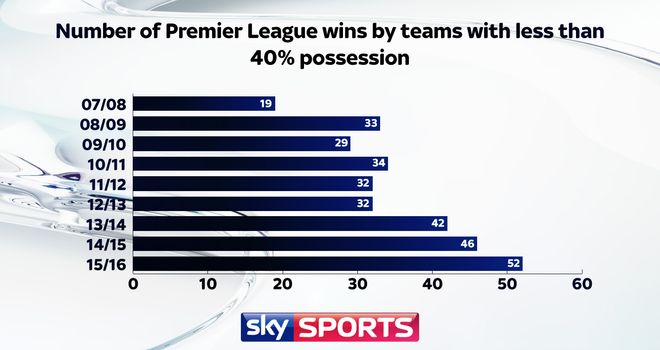 The international stage shows a similar trend. At the World Cup in 2006, only 31 per cent of sides allowed the opposition over 55 per cent possession. At the 2014 World Cup that figure was up to 75 per cent, and 76 per cent for Euro 2016.

Beyond the figures, what do these modern sides look like? According to Sky Sports' Spanish expert Guillem Balague, they look like those of old. "We thought we had moved on from that, but this tournament has made it fashionable again. Talented players such as Ricardo Quaresma, Joao Moutinho, Andre Gomes, Rafa Silva, Kingsley Coman and Anthony Martial were left on the bench for the Euro 2016 final in favour of hard-working midfielders.

"Portugal's midfield featured William Carvalho, Renato Sanches and Adrien Silva, while France had Moussa Sissoko and Blaise Matuidi with Paul Pogba in a holding role. There's lots of power and strength, but it was lacking the finesse and talent you associate with most European champions."

Who makes your VI this season? Pick your team here to win the £25k jackpot.

Portugal had less of the ball and came out on top, and that style could suit another Portuguese national as he looks to return to the top flight summit next May.  Though he struggled with Chelsea in the 2015/16 season, Balague believes the shift is good news for Jose Mourinho and Manchester United.

"This makes interesting reading for United. Football goes in cycles and for a while it looked like the possession-based style - building from the back and defending with the ball - had taken over. Mourinho's Chelsea seemed to have reached a peak and looked stale when they couldn't beat a 10-man PSG in the Champions League. I wondered if Mourinho was going to change with the times from that point. Could the new style work in Manchester United and Jose Mourinho's favour?

"But Diego Simeone and some of the most successful sides in this Euros have shown a return to the style that took the Portuguese manager to the top of the game. Such is the trend that Manchester United, one of the biggest clubs in the world, have had no problem in hiring one of the major advocates of that conservative style of play."

The 2015/16 Premier League season was the most surprising in history. More shocks, less home bankers and the slimmest gap between top and eighth place since 1997.

As that gap narrows, the top clubs need to adapt. Wenger said in December he would "keep his philosophy", Guardiola's possession-based style with Bayern Munich worked domestically but not in Europe, while Mourinho and Chelsea's Antonio Conte look well-placed without Champions League football sapping their energy levels.

Looking up at champions Leicester, they may be thinking: "If you can't beat them, join them."