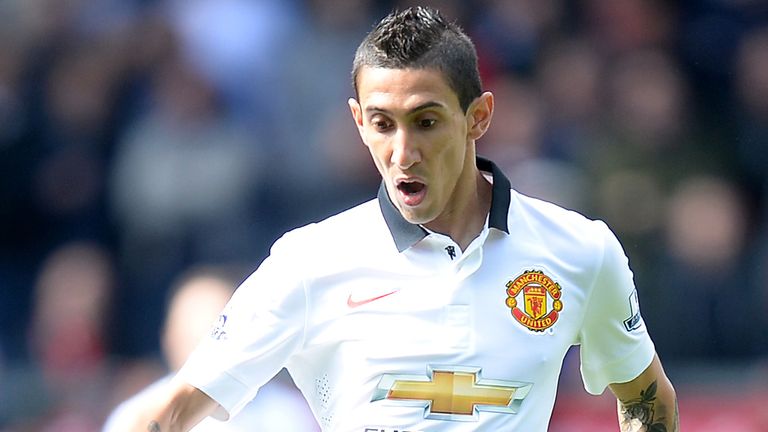 Angel di Maria: Real Madrid have been criticised for selling the winger to Manchester United

Madrid also sold Spanish midfielder Xabi Alonso to Bayern Munich, much to the disappointment of Cristiano Ronaldo, who recently voiced his discontent and questioned Perez's decisions.

"We made the best offer that we could to Di Maria and he didn't accept it. Hence, we brought in James (Rodriguez), one of the best players at the World Cup and the Golden Boot award winner."

"I know Cristiano Ronaldo very well," Perez said in a press conference on Thursday. "Cristiano is the best player in the world and his loyalty to Madrid is unquestionable.

"I have listened to all the comments he made and as I know him, I know that he never questioned the club.

"My relationship with him is perfect, there are zero discrepancies.

"Cristiano is the best player in the world, it's obvious, and more so this year."

Perez revealed that Di Maria left Real no option but to sell him after the Argentina international had turned down an improved contract following his impressive 2013-14 campaign.

"I've been here since 2000," Perez said. "Since then a lot of players have come and gone and my experience tells me that the ones that leave are always the best and those that arrive are always questioned.

"My first (signing) was (Zinezine) Zidane and the last (before this summer's transfer market) was (Gareth) Bale.

"We made the best offer that we could to Di Maria and he didn't accept it.

"Hence, we brought in James (Rodriguez), one of the best players at the World Cup and the Golden Boot award winner.

"Di Maria and all of those that have left have our gratitude and respect.

"A player that is under contract and leaves is because he wants to.

"Di Maria had financial requests that I considered legitimate but we couldn't satisfy them.

"I reiterate that we made him the best possible offer.

"With the exception of Cristiano (Ronaldo), Di Maria would have been the highest paid at Real Madrid.

"Had we accepted his financial demands it would have created an unbalanced treatment that would have put the club's stability in danger.

"Di Maria left to Manchester for a fee that we considered fair and that is why the transfer was completed.

"We wish Di Maria the best professionally and personally."

"Xabi came to us and told us that he wanted to leave," he said. "He thought it was the best for him and for the club.

"Our relationship with Xabi is excellent and we accepted his proposal.

"Xabi is in the final stages of his sporting career and wants to manage it in this way.

"We understand it and we respect it."

Falcao was heavily linked with a move to the Bernabeu stadium in the past few months but joined Manchester United on season-long loan from Monaco on Monday instead.

"We considered signing Falcao," Perez said. "But in this club we follow a sporting-economic equation which (former club president Santiago) Bernabeu taught us, and we decided not to do so.

"The coach's opinion was also important in us turning it down."