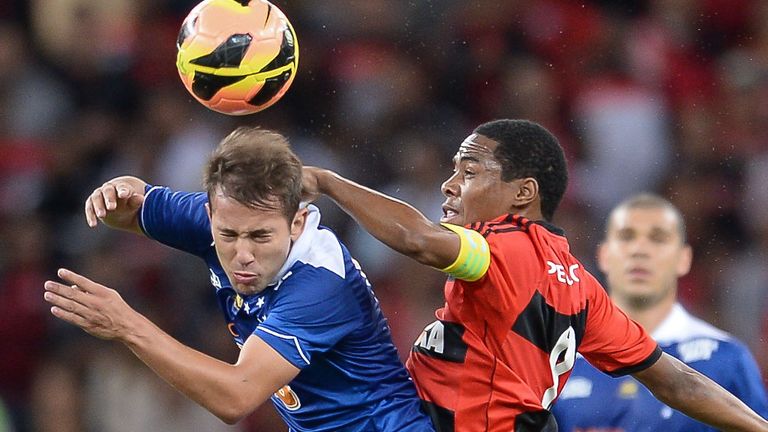 Everton Ribeiro (l): An English club has bid for the Cruzeiro star

The agent of Everton Ribeiro says that Cruzeiro have turned down a bid from an unnamed English club for the playmaker.

The 24-year-old has frequently been linked with a switch to Manchester United throughout the transfer window, but the Brazilian club have previously denied suggestions of an exit for their star man.

David Moyes has been reported to be keen on bringing Ribeiro to Old Trafford, although agent Robson Ferreira refused to confirm which side has submitted an offer.

"We did bring a 10million euro offer to Cruzeiro for Everton Ribeiro but we won't reveal the club in order not to affect the negotiations, after all they are in the middle of their season," he told Lancenet.

"We presented the offer to Cruzeiro, we talked and we will schedule another meeting within the next days. The club want to keep him and the player also wants to help the club in the Copa Libertadores. We'll try to merge all the interests."

Meanwhile, Cruizeiro's director of football, Alexandre Mattos, insists that it will take a substantial bid to prise away Ribeiro.

"Everton Ribeiro is one of the players that arrived at Cruzeiro with a lot of potential and along with his team-mates, he managed to turn that into reality," he said.

"He achieved individual awards, he is happy but there was no offer to convince the club's president. An offer from England arrived yesterday and Cruzeiro turned it down immediately.

"Maybe an offer will come that will make Cruzeiro understand it would be a mistake not sell, but the important thing is knowing how to find a replacement of the same level.

"When someone leaves, we have to have to find a replacement."