David Raya on his table-topping stats for Brentford: "Teams don't tend to press the goalkeeper as much, so I have a bit more time. We can create chances from through me being brave." Watch Brentford vs Chelsea on Saturday Night Football from 5pm; kick-off at 5.30pm 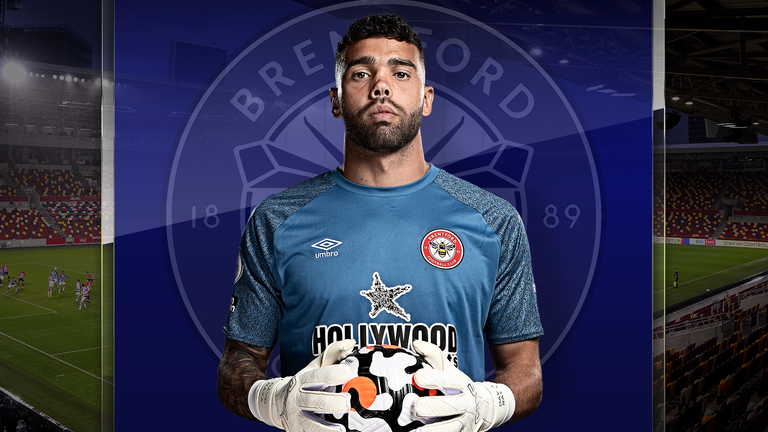 "The worst thing about London is the traffic. It's just everywhere. You go six miles, it takes 45 minutes. It's mad."

David Raya is quite definitely an adopted Londoner. Partly because of his strong views on the state of the city's roads, and partly because a western corner of the capital has finally helped him to fulfil a childhood dream.

The 26-year-old has waited a long time to satisfy the Premier League ambition his father stoked in him as a child when they pored over the English top flight together in their Barcelona home. He left Spain in 2012 to sign apprenticeship terms with Blackburn - who in turn were promptly relegated from the top flight - and, nine years on, has finally turned the dream into a reality alongside a Brentford fanbase for whom reaching this level has been rather longer in the offing.

"It took a while to sink in that we'd been promoted," he tells Sky Sports. "Coming in for pre-season, seeing the badges on the shirts and around the club it started to feel like a reality, and then that Arsenal game, the build-up to it, the team meeting, it finally hit me. Walking down the tunnel, seeing them lining up alongside us, it really hit me that this was it, the big deal."

For a man who hates traffic Raya hasn't had to deal with too much this season considering the Bees are embarking on their first season in the top tier for more than seven decades. Their expected-goals-against tally is lower than Liverpool's, and their keeper has kept three clean sheets in his first seven matches in what has become the joint-best start of any promoted side since Hull City in 2008.

It would no longer seem such a major surprise were they to upset Champions League winners Chelsea in their next game on Saturday, live on Sky Sports Premier League from 5pm.

After Raya's previous television outing last month, Liverpool manager Jurgen Klopp suggested the Bees No 1 should have a No 10 on his back following a breathless 3-3 draw, with Raya's pinpoint passing instrumental in building the attacks which saw the Reds concede three times in a league game for the first time since February.

Ask the average person on the street to name a Brentford player and Ivan Toney's name will crop up more often than not, although the goalkeeper is starting to carve out his own reputation outside the borough of Hounslow. 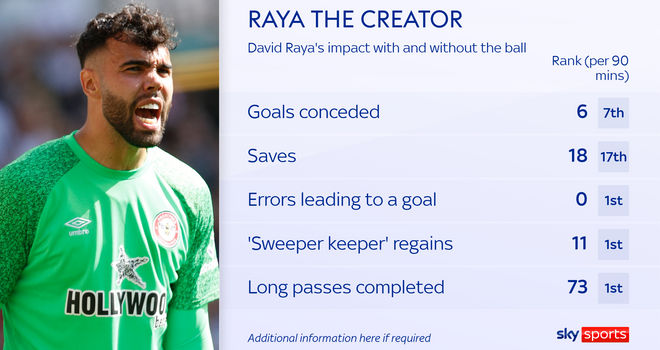 In the world of the inelegantly named 'sweeper keeper regains' statistics, roughly translating as the number of times a goalkeeper has come off his line and won possession for his team, Raya tops the charts across the Premier League. No goalkeeper comes close to rivalling the number of passes he has completed into the final third, either. Sooner or later opposition sides will cotton on, but for now the element of surprise is paying off, just as it is for his team.

"It's just the style we play, we've always relied on it," he says. "Teams don't tend to press the goalkeeper as much, so I have a bit more time than the centre-backs.

"It's something we've worked out we can create chances from, across the last two seasons, through me being brave and being able to pick out the player who might not score, but will go on to create a chance.

"We play with a high line and don't play offsides, so it relies on me to have a really good starting position to not concede from counter-attacks. When I first arrived it took a few games getting used to, but then it clicked and it's worked brilliantly."

It takes some real faith in your personnel to play that kind of risk-reward football in the transition, and self-belief is high on the list of Thomas Frank's priorities at Brentford, as he told Sky Sports last month.

It's that confidence which, aside from Brentford's technical qualities, has perhaps played the biggest part in their early-season success. It was born as they saw off four Premier League clubs en route to last season's Carabao Cup semi-finals, and grew through Frank's decision to trust in his side during a summer which saw just three first-team signings added to his squad.

"It's been a dream start for us," Raya says. "But it's in the character of the team, the DNA, to try to compete against everybody. We showed that last year, in that cup run. We took that as a sign that we were able to compete in this league; we were already beating a few teams from the Premier League.

"Knowing the relationship I have already with the defenders is really important. I know more or less where they're going to be, and vice versa. And the one defender who has come in, Kristoffer Ajer, his adaptation has been incredible."

In contrast to his success on the pitch, the last 18 months have been the toughest in Raya's career to date. He is still close to his family, and the Covid-19 pandemic, lockdowns and travel bans left him more separated from his parents and family back in Barcelona than at any other time in his life.

That could have made the error he made for Fulham's opening goal in the 2020 play-off final defeat, which put paid to Brentford and Raya's Premier League hopes for a year, all the more difficult to stomach were he not so strong-willed.

"It didn't affect me," he says. "I was angry with myself because I should've been a bit more switched on, but if you see other games I have done the same thing. I wish it happened in another game rather than one so big, but we didn't play the way we should have played.

"We only had 13 days off after that game, but that itself was a weird situation. I couldn't go home because of Covid, I couldn't see my family, couldn't see anyone. It would've been easier if I had my family around. It's been the toughest period I've had in England without going home. Missing home, being homesick was not a good experience."

Now the Premier League dream has been realised, next on the agenda is breaking into the Spanish squad. There was a time when playing for Brentford would have made that difficult, but times are changing. Brighton's Robert Sanchez made his international debut for Luis Enrique earlier this year, Raya has a real chance to stake his own claim for a place.

"I relate to [Sanchez], we've had a similar career," Raya says. "He got into the Premier League earlier, but it shows what football can do for you. Even going on loan to lower divisions and non-league, it gives hope to players that they can still make it. You see players like us, or Jamie Vardy, that are getting to the maximum level.

"It'd be a dream come true to represent my country, every player would love to do it. It's another thing I've always wanted to do, so let's see what happens."

As a proud Spanish footballer, it would feel remiss to finish the interview without gauging Raya's opinion on Kylian Mbappe's controversial winner against Spain in the Nations League on Sunday night. "Yeah," he replies, puffing out his cheeks, before muttering an expletive. Enough said.