Liverpool, Manchester United, Chelsea and Tottenham understood to have been monitoring 20-year-old Kai Havertz has become one of Germany's most exciting prospects

Kai Havertz is expected to stay at Bayer Leverkusen for at least the rest of the season despite interest from the Premier League.

Liverpool, Manchester United, Chelsea and Tottenham are among the clubs understood to have been monitoring the 20-year-old this season.

But he is said to be enjoying his time at Leverkusen and focused on the rest of the Bundesliga season after scoring three goals in 16 appearances this term. 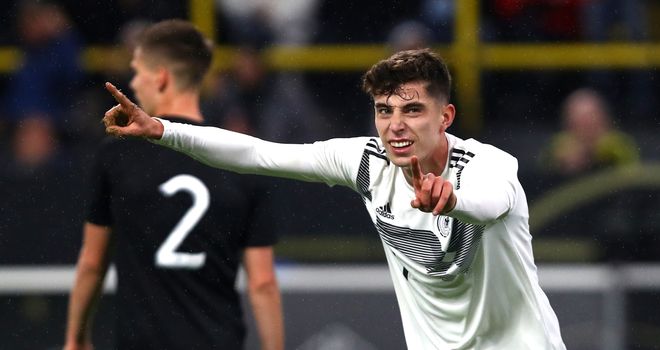 The Germany international has emerged as one of the most promising talents in Europe, after breaking through their youth academy to become the club's youngest debutant in 2016 at 17 years and 126 days old.

He has been tracked by Spurs in particular for a number of seasons, having impressed scouts under former manager Mauricio Pochettino while playing for Germany's U19s and then thrust straight into the Germany senior side a year later.

Reports in Germany have claimed he could become a target for Bayern Munich if Pochettino takes over at the Allianz Arena. Sport Bild have claimed Barcelona and Real Madrid scouts have also watched him.