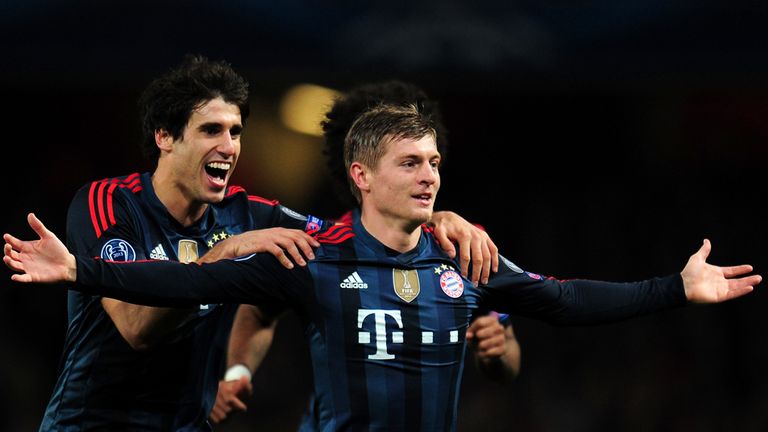 Toni Kroos: Caught the eye at Emirates Stadium on Wednesday

Pep Guardiola believes Toni Kroos is ready to shun interest from afar and commit his long-term future to Bayern Munich.

The highly-rated midfielder has emerged as a top target for Manchester United, with a big-money approach reportedly being readied for the summer.

Kroos showed why the Red Devils are so keen to secure his signature on Wednesday with a star showing as Bayern overcame Arsenal 2-0 in the first leg of their UEFA Champions League last-16 encounter.

United boss David Moyes was at the Emirates to see the 24-year-old crash home the opening goal of that contest, and will have left even more determined to land the Germany international.

Bayern, though, are prepared to do all they can to keep Kroos at the Allianz Arena.

His current contract is due to run until 2015, but no extension has been agreed as yet and he faces stiff competition for a starting berth from the likes of Javi Martinez, Bastian Schweinsteiger, Thomas Muller and Thiago Alcantara.

Guardiola is, however, of the opinion that Kroos is happy at Bayern and prepared to play his part for the collective cause.

He said after the midweek win in north London: "He played on a very, very high level. That was real Champions League level.

"We all want him to prolong, and he also wants that, I am very positive about it. The club, we all want that."