We run the rule over Romanian starlet Vlad Chiriches 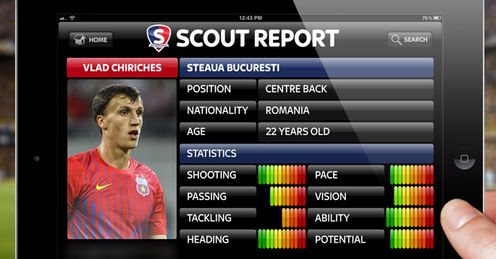 Next under our gaze is highly-rated Romanian defender Vlad Chiriches, who is attracting a great deal of interest from around Europe.

The 22-year-old is currently one of the stars of Steaua Bucharest's defence, and is emerging as one of the best players of his generation.

He began his playing career with Ardealul of Cluj, who signed him whilst at school aged just 14.

Upon his return to Romania he joined lower league club International Curtea de Argus and helped them earn promotion to the top flight in 2009.

His performances in Argus earned him a move to Pandurii Targu Jiu and he soon emerged as a stand-out performer and he was handed his maiden call-up to the Romanian squad, and was capped immediately. He has remained a prominent member of the national team ever since.

It took him just one season at Pandurii to then seal another transfer, this time to Romanian giants Steaua Bucharest - who beat a host of rivals to his signature.

He immediately became a regular in the side, but since his move he has played in a number of roles.

There is no doubt that Chiriches is a centre-half, and that is his best role. But due to his outstanding skill and technique he is more than capable of playing full-back or midfield - as he has shown.

Chiriches is already regarded as one of the best young defenders in Europe, and it is little surprise the interest he is generating.

AC Milan look to head the queue, but Chelsea, Barcelona and Real Madrid are also said to be closely monitoring him.

Chiriches is a composed, elegant performer - who looks on the brink of a big move and marks a remarkable rise from his teenage years.

AC Milan look primed to land him, and he does appear to have all the traits of a top Italian-style defender.

You have read our opinion of Vlad Chiriches - now we want your views. Have you seen Chiriches in action? Do you agree with our assessment? Do you think he will make it?