We run the rule over Dinamo Zagreb starlet Alen Halilovic 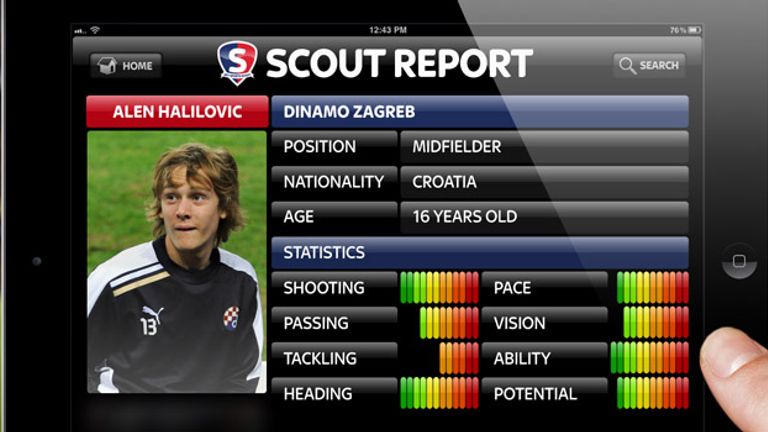 Latest under our scout's gaze is Dinamo Zagreb's Alen Halilovic

We check on one of the most talked about young players on the planet - Dinamo Zagreb's Alen Halilovic.

Still on 16, Halilovic has already set a trail of records. In September this year he made his debut for Dinamo - becoming the youngest player in Croatian history. Ten days later he scored, making him the youngest ever scorer.

He is now a regular in the Dinamo squad and became their youngest ever Champions League player when he featured against Paris Saint Germain in November.

He is the son of Sejad Halilovic, who was a distinguished player in his own right, playing for a number of clubs including Zagreb and Real Valladolid, and he also played internationally for Croatia and Bosnia.

Halilovic could very well have started his career elsewhere as Dinamo had to battle to hold onto his services. When he was aged 14, Real Madrid spotted him at a youth tournament and tried to sign him. They held talks with Sejad, but Dinamo were not willing to release him and so he stayed put and signed a four-year scholarship.

It was not long before he began making huge strides through the youth ranks and there were even calls for him to play aged 15 - but it was not until he was 16 years and 102 days that he got the call.

Often likened to Luka Modric - it really is uncanny how similar in size, stature and even looks the two are - and yes Halilovic plays very much like the Real Madrid star.

Behind the front-men, attacking from midfield, Halilovic is a wonder for his age. Unlike Modric he is left-footed but that almost shows him off in a more elegant fashion and it could be argued his finishing is better.

Clearly he is far from Modric in terms of his general play and passing - but you could argue they were cast from the very same mould.

Like his father, Halilovic will also have to decide about his international future - Croatian-born and he has come through the youth ranks with Croatia - he is eligible to play for Bosnia and a final decision has yet to be made.

Real Madrid, Manchester United and Manchester City are at the head of a very lengthy queue to secure Halilovic - it really is a question of when and not if this boy will make a multi-million pound switch to one of Europe's biggest clubs.

He has his pick of clubs, and only the player - with his father guiding him - will decide. Hopefully he won't be rushed and his burgeoning talent will continue to blossom.

You have read our opinion of Alen Halilovic - now we want your views. Have you seen Halilovic in action? Do you agree with our assessment? Do you think he will make it?