We run the rule over Nice forward Neal Maupay 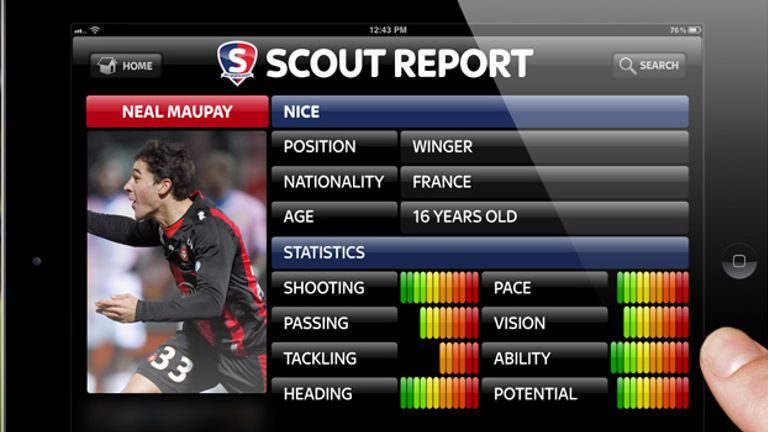 Latest under our scout's gaze is Nice's Neal Maupay

We take a look at a young man in France being tipped for the very top - Nice's Neal Maupay.

One of the youngest players to be playing regular top-flight football anywhere in the world, Maupay is attracting headlines after making the breakthrough this term.

Born in Versailles, Maupay and his Argentine family moved to Valbonne when he was aged just six, but his talent as a footballer, even at that age, was already becoming apparent.

Maupay was quickly picked up by local youth side U.S. Valbonne and stayed with them until 2007 when he was spotted and signed by local Ligue 1 outfit Nice.

Maupay's progress at Nice has been phenomenal, but even this summer few could have foreseen just how far he would have come.

Along with Madagascar-born team-mate Albert Rafetraniaina, Maupay was promoted to train with the first-team squad by Claude Puel, who had previously given Eden Hazard his debut at 16 at Lille.

Rafetraniaina was first to play in the cup, but then Maupay was soon given his chance in the league. Just a month after his 16th birthday he was handed his Ligue 1 debut.

On September 14th he played for France's Under-16 side and just two days later he was on the bench for the league match with Brest and came on to make his debut.

In December he grabbed his first goal, scoring the late winner against Evian. He is now a regular in he side and has played in 10 league games, starting nine of those.

In January, Nice offered him professional terms and the hope is that Maupay will commit. All indications are that he will sign, but already the big clubs are flocking.

But there is another battle for Maupay. Nationally he currently plays for France, however he has Argentine parentage and they are keeping close tabs on his situation.

Many people feel Maupay could end up featuring for Argentina, given how he plays in a similar manner to the likes of Carlos Tevez and Sergio Aguero.

It is easy to see the likeness, and you could also throw in Wayne Rooney. Physically he is beyond his years in terms of upper-body strength.

Still small, but with a low centre of gravity, he is full of running and won't shirk any challenge despite his diminutive frame. He is quick, but the main aspect is that he does have an eye for goal.

All eyes are on Maupay to see how he progresses. Will he be France's own Rooney? Only time will tell.

One thing is for sure is that Claude Puel has a huge influence on him and the longer he stays under his tutelage, that will surely be to his benefit.

You have read our opinion of Neal Maupay - now we want your views. Have you seen Maupay in action? Do you agree with our assessment? Do you think he will make it?