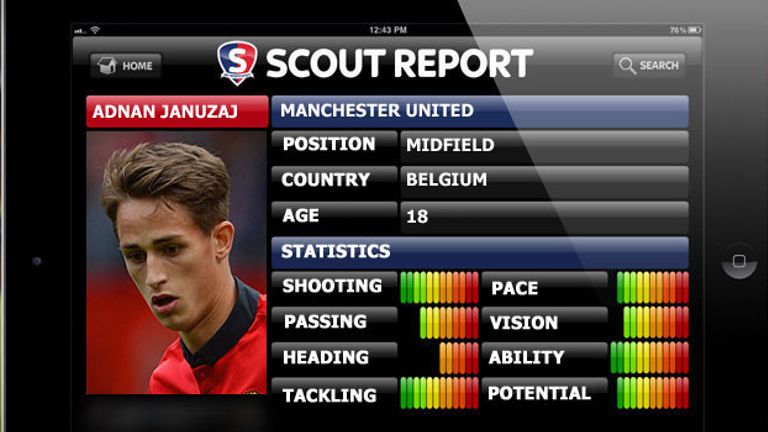 Our scout will report back and you can comment on what you think of their appraisal.

The latest player to be spotlighted is Manchester United's Adnan Januzaj.

Adnan Januzaj is one of the most talked about players in world football at the moment. We check on the Manchester United starlet and see if he is worthy of the furore surrounding him.

Januzaj hit the headlines following his brilliant two-goal full debut for United, which helped them to victory at Sunderland.

Januzaj has emerged as the latest product off United's conveyor belt of talent, although he is only two years into his Old Trafford career.

Born in Belgium, Januzaj - as is being reported all over the press - has rebuffed advances to play for his homeland as he could also play for a host of other countries including Albania, Serbia, Turkey, Croatia and Kosovo - although they are yet to be sanctioned by FIFA and UEFA - whilst England are also hovering as they could pick him if he stays uncapped over the next few years.

Januzaj began his playing career aged just six when he started training with FC Brussels, where he spent five years, at which point he was snapped up by giants Anderlecht.

And it was five years later when United came calling, although Sir Alex Ferguson is believed to have tried to sign him before he was 16, given just how impressive Januzaj was.

United held off competition from a number of European clubs to land the player as he signed for them in 2011.

Januzaj's progress has continued at United and last season he was named their reserve team Player of the Year, while he was also handed a squad number and was on the bench for Sir Alex Ferguson's final game in charge at West Brom in May.

David Moyes' arrival has only improved Januzaj's trajectory and he was used throughout pre-season by the Scot. With United failing to bring in many new faces during the transfer window he has found himself with the opportunity in the first-team. His first start came at Sunderland and he took his chance with both hands.

But is Januzaj worth the hype? Well maybe, just maybe. He is hugely gifted, there is little getting away from that.

Some have likened him to David Beckham, and you can see that given his balance and poise when in possession. However, perhaps you should call him a hybrid of Beckham and Giggs, as he does posses the qualities of an out and out wide-man too.

Januzaj has natural pace and seemingly glides over the surface with little effort and his ability to beat a player is a natural one.

As he has already proved, his left foot is a potent weapon but his vision is of huge quality, too. All in all, he has everything to be a world-class attacking midfielder.

You get the feeling United knew all along just how good Januzaj was and it is little surprise to the impact he is making so early in his career.

Most of Europe's top clubs are circling and getting him signed to a new long-term deal will be one of their most important pieces of business in the coming months.

You have read our opinion of Adnan Januzaj - now we want your views. Have you seen Januzaj in action? Do you agree with our assessment? Do you think he will make it?

Would Adnan Januzaj make your team? Pick your Sky Sports Fantasy Football team for the chance to win over £100k in prizes. Play for free here.