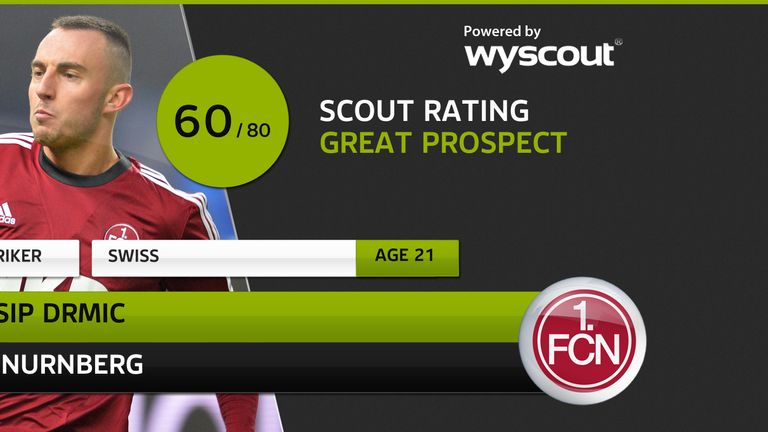 Sky Sports Scout is our exciting feature where we scour the globe, in partnership with Wyscout, looking out for the best talent and bring you a report on what we find.

Our scout - using all the tools at his disposal, which now includes the world's leading scouting resource Wyscout - will report back and you can comment on what you think of their appraisal.

You can also now interact with the scout via his Twitter feed! You can get in touch with him and interact here or just search for @SkySportsScout.

The latest player to be spotlighted is Swiss striker Josip Drmic.

Josip Drmic has been raising eyebrows throughout this season with his displays in the Bundesliga, now we check on the striker catching the attention of clubs throughout Europe.

Born in Lachen, Switzerland to Croatian parents, Drmic took up football from a very early age and was playing with local side FC Freienbach until 2001 when he was spotted by FC Rapperswil-Jona.

In 2009 aged 17, he was snapped up by FC Zurich and was sent to play for their second team, where he immediately impressed with 15 goals over 18 months before being promoted to the first-team squad in the summer of 2010.

2010 also saw his debut for Switzerland's youth set-up, although this had been delayed as he did not have a Swiss passport, having had two applications rejected, and the delay meant he missed the World Under-17 World Cup a year earlier.

He actually made his first-team debut earlier in 2010 but his first goal did not come until early 2012, when his real breakthrough arrived. He finished that season in good form and, the following year, he became a regular starter under Urs Meier, which came after he earned a place in Switzerland's Olympic squad for London, where he featured in a couple of games.

Drmic, though, rewarded Meier with a fantastic first full season, which would prove to be his last in Zurich colours, as he bagged 12 goals in 28 starts.

His performances saw him catch the eye of a number of clubs and FC Nurnberg sealed his signature in a deal worth around £2million - but few could imagine the sort of impact he has had on the Bundesliga this season.

Jostling with Mario Mandzukic and Robert Lewandowski at the top of the goalscoring charts, suddenly Drmic has emerged as one of the best strikers in one of the best leagues in the world.

By this time he was already a full Switzerland international, as Ottmar Hitzfeld moved quickly to hand him his first cap in late 2012 knowing that Croatia were hovering and ready to hand him a call-up, given he was still eligible for them.

Now Drmic is on the cusp of heading to Brazil and being one of those to make a real name for himself at the World Cup finals. But it remains to be seen whether he will do that as a Nurnberg player, with reports in Germany claiming he has a release clause of just £5million, which led to speculation that he could be heading to Borussia Dortmund to help them get over the departure of Lewandowski.

With Arsenal also strongly tipped, and West Ham United boss Sam Allardyce making personal checks on him, it seems like at Zurich, he could be on his way out of Nurnberg after just one full season.

And seeing Drmic in action, it is easy to see why people are excited. He is a natural finisher with many attributes that seem to be in place to make him a real force.

Agile and quick, but at nearly 6ft, he is not a small figure, but he has a low centre of gravity, making him quick off the mark. He can hold up the ball well and bring the midfield into play with intelligent play, although his main game is in and around the box, as he is always looking to get a shot on goal.

Not dissimilar to Lewandowski in stature, it is easy to see why he has been likened to the outstanding Dortmund striker as their all-round games are also very much alike. Drmic clearly has more rough edges, but given how little experience he has, the potential in him is another factor that no doubt has the likes of Arsene Wenger and Jurgen Klopp salivating at the prospect.

A really good striker, who at 21 looks to have the world at his feet. His next move needs to be chosen carefully - but having shown he can do it in the Bundesliga, he looks more than ready for a big transfer.

You have read our opinion of Josip Drmic - now we want your views. Have you seen Drmic in action? Do you agree with our assessment? Do you think he will make it?

Get in touch, either using the form below, email or the scout's Twitter feed - @SkySportsScout.

Pick your Sky Sports Fantasy Football team for the chance to win over £100k in prizes. Play for free here.