Driving Force, which is available On Demand via Sky and NOW TV, explores the making of athletes and the forces behind their success; this episode focuses on Christine Ohuruogu and her journey to the top.

Christine Ohuruogu vividly remembers making the phone call which halted her England Netball career in favour of athletics; it was one of the hardest of her life.

Speaking to Judy Murray in the latest episode of Driving Force on Sky Sports, Ohuruogu shares how netball was her first sporting love, and how her track career developed naturally alongside it.

Ohuruogu, who would become Olympic, Commonwealth and world champion at 400m, grew up in East London. She was born and bred in the area that would go on to house the London 2012 Olympic Games.

Looking back, her childhood years evoke fond memories and she recalls that her time was largely spent playing outdoors, particularly alongside her older brother Obi.

"What was nice about our neighbourhood was that all of the kids played together," Ohuruogu said on Driving Force.

"There was a real sense of community, even though we all had different backgrounds.

"We'd always make up games. My mum and dad were working, we didn't have loads and loads of toys and we didn't watch much television. Instead, we spent our time outside and we were able to really use our minds to create things to do outside."

Those early years, of making up games, being active and enjoying herself outside, shaped Ohuruogu's perspective on sport. They erased any stereotypical gender roles that she might have developed otherwise.

"I would be outside with my brother, playing football for example. I never saw myself as a girl so I couldn't do what they did. I think it was taken as a given that if he was out playing, I had to be with him."

As Ohuruogu's family grew, she would become the second eldest of eight, she took on a natural mothering role within the unit and believes that being part of such a large group, is something that moulded her personality.

"I look back on it and I think that those years were really important for shaping my future," she said. "Growing up in a big family was great because you had to learn skills like diplomacy and people management from a very young age."

As Ohuruogu went through school, her parents were keen that she would focus on her studies and come out of her education with good grades and a degree. All the while, Ohuruogu continued to enjoy being active and before athletics, came her first sporting love; netball.

After being introduced to the sport by a teacher in primary school, who herself was learning the sport from a textbook as she went, Ohuruogu carried her passion for netball with her to secondary school.

"Netball was the one place that I really did find myself at home. I loved being part of a team and that the girls actually had a sport," she said.

"Apart from netball, we didn't really have anything. I remember once I was in the library - I was always in the library, I was such a nerd - and I got a book out about netball." 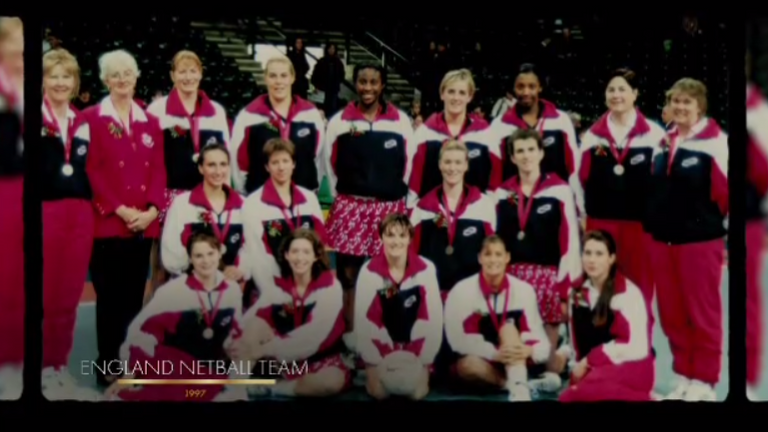 I saw a picture of the England Netball team in it, I must have been about 13-years-old at the time and said that I wanted to play for England one day. I think from there, the seed was sown. I joined a club and from that I had England trials.

In order to try and achieve her ambition of playing for England, Ohuruogu looked to different areas of training in order to give her an edge. In June 2000, she went down to an athletic track in Newham and told Tim Mundle that she wanted to train in order to get a little bit of fitness back to be ready for the netball season.

After that first Monday evening, Mundle asked Ohuruogu if she'd be returning and when she did, he handed her the first pair of spikes that she'd owned. When it came to an early track meet, Ohuruogu had her sights set away from the 400m.

"I remember, I thought that I was quite fast, and I remember thinking that I hoped the club would put me in a 100m or 200m race in the meet.

"It turned out that all of the other girls had taken up those slots, I didn't have first dibs! The 400m was the event which was left empty… I looked at it and thought that it was a long way.

Even though it was her first race and she didn't know too much about how to do it, or what to do, she just committed herself to running it. At 16-years-old, she ran 59 seconds after two days of training.

Ohuruogu's win, immediately made her the resident 400m athlete at her club and from there, there she didn't look back.

"I didn't realise that whenever you ran, your time went into a central database and you were ranked. When I got the letter inviting me to compete for Great Britain, I was ecstatic. It was like a whole different world opened up.

"I started to understand and notice that they were seeing something in me that I didn't know existed. They were encouraging and told me to make sure that I came back next week.

"Back in the day, coaches were voluntary, and they weren't getting paid or being recognised. They were just doing it because they loved the sport and they wanted to coach people like me, who just turned up off the street and thought they could do something."

While Ohuruogu was developing as an athlete on the track, she'd achieved her goal of playing netball for England (at U17 and U19 level) and it came to a point, where she felt that a choice needed to be made.

As any athlete will tell you, trying to combine two sports at elite level is near impossible. For Ohuruogu, netball camps and race meets would clash on weekends, and there just weren't enough hours in the day to successfully train for, and compete, in both.

"I remember the phone call that I made to the head of England Netball's performance at the time, it was probably one of the hardest phone calls I ever made in my life.

"I ended up calling her about 8pm at night because I'd been putting it off and just couldn't do it.

"I knew that she was going to be absolutely devastated because I knew how much hard work they'd put into me. At the time, I almost thought that maybe it wasn't the right decision.

"But, I'd joined Lloyd Cowan. It was his persuasive tactics that pried me away from netball. Even though I couldn't fully appreciate what he could see [in me], I was able to appreciate that he believed in me somewhat. I was able to run the risk and trust him on that."

It was a risk which would ultimately bring about great rewards for Ohuruogu and Cowan. Their partnership blossomed into a formidable 14-year relationship and earlier this month, Ohuruogu wrote a heartfelt message about Cowan after his death at the age of just 58.

"Lloyd was a unique master of his craft," she said. "Selfless to a fault, passionate and above all, committed to his athletes. His passion for coaching was limitless. His energy and knowledge could not be contained.

"He coached with his heart and had a humility that ensured he had love and time for others, regardless of their standing. He made it his purpose to uplift and encourage at any opportunity. He was truly a rare find."

While the world of English netball would have loved to have retained Ohuruogu, the decision that she made to focus on athletics allowed her to become one of the the most successful female athletes the country has ever seen. With Olympic, World and Commonwealth titles at 400m, it's certainly a decision that paid off.

All of the 'Driving Force' episodes are available On Demand including programmes with Dame Sarah Storey, Dina Asher-Smith, Judy Murray and Victoria Pendleton.