Driving Force, which is available On Demand via Sky and NOW TV, explores the making of athletes and the driving forces behind their success; the latest episode focuses on Kelly Holmes; from her life in the army to her injury woes, battling depression to self-harm and double Olympic gold

Dame Kelly Holmes opens up to Judy Murray about the incredible highs to the desperate lows of her extraordinary career in the latest episode of Sky Sports' Driving Force.

One of Britain's greatest athletes of all time is the latest superstar to sit down with Murray to discuss her phenomenal career which led her to becoming a double Olympic gold medallist in 2004.

Holmes is not just an Olympian, but an honorary Colonel and a global inspirational speaker.

Her Olympic dream came to the fore after watching Sebastian Coe win gold in the 1500m at the Los Angeles Games in 1984, she was 14. As Coe's tactical strategy of bursting away from his opponents down the back straight worked for him, Holmes would adopt a similar game plan for much of her career.

At the age of 34, Holmes felt she was in the shape of her life heading into the women's 800m final in the Athens Games. She went on to run the two fastest 400m of her life, holding off Hasna Benhassi before crossing the line in first place in a time of 1:56:38. The image of her eyes almost popping out of her head in excitement is iconic.

Five days later, she secured the 1500m title to become the first Briton for 84 years to achieve the Olympic middle-distance double.

"If I hadn't won the 800m I think I would have personally put pressure on myself to win something that was a dream for 20 years, since I watched Sebastian Coe win the 1500m. I always wanted to be a 1500m Olympic champion.

"I felt in the final like I was floating. I literally say to people 'something was holding me up' and I was going through something what was like a movie. People were silhouettes.

"The only person I knew was behind me was Benhassi because she won a silver medal in the 800m and then this ton of weight went off me. I had an angel tattooed on my shoulder because I seriously believe that when you go through journeys in life maybe it's for a reason.

"I don't think I would have won two gold medals without that journey so I would go through it again if it made me win two golds."

Dame Kelly Holmes is a double Olympic gold medal athlete + an honorary Colonel. Her story is every bit as educational as it is inspiring - a tale of triumph over many adversities. Share her journey on
DRIVING FORCE on Tuesday at 9pm on Sky Sports Mix. @powtvco @damekellyholmes pic.twitter.com/TdybEGL7as

It had taken Holmes quite a journey to reach her ultimate goal. It all started in 1970 when she was born to Pam, a British white female, who lived in Kent.

Pam met Kelly's dad Mick when she was four and they married a few years later. Her brothers Kevin and Stuart came along and she only realised she was different to the rest of her family when the song 'Brown Girl in the Ring' by Boney M came out.

"I thought I was special and I always had that attitude that being different meant good things, not negative, and I suppose I felt quite lucky that I had that perception that actually standing out is better than blending in," said Holmes.

Her talent for running was spotted by P.E teacher Debbie Page at Hugh Christie Comprehensive and despite her dislike of cross-country running, Holmes' athletics career took off after meeting coach Dave Arnold at Tonbridge Athletics Club.

That wasn't before a teenage Holmes had joined the Women's Royal Army Corps.

Speaking to Murray about whether she had suffered any racism in the army, Holmes said: "If I looked back at my career in some incidences that you had I could question 'did they just not like me?', 'was it because I was a woman?', 'was it because I'm mixed-race?'. 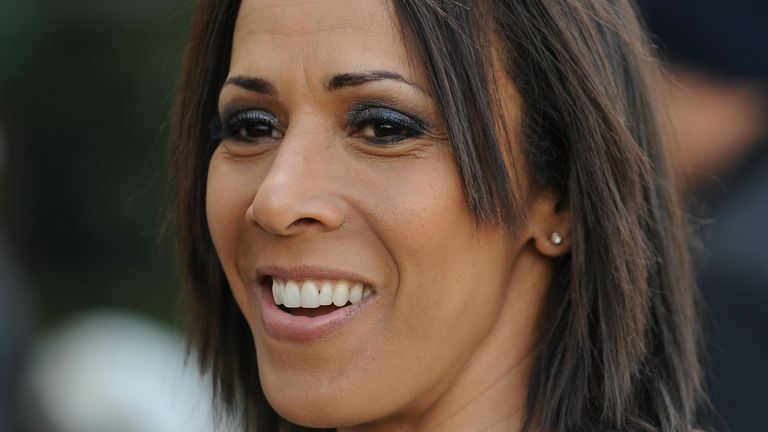 "I didn't know about having a breakdown, becoming a self-harmer to being depressed. I didn't know what that meant."

Holmes also speaks candidly about her catalogue of injury woes as well as suffering gynaecological problems which required five operations.

From a stress fracture of the shin in 1996 to rupturing her calf and tearing an Achilles tendon a year later to damaging the femoral nerve in her right leg and then glandular fever in 1999. Two more calf tears followed, leaving her at her lowest point.

It was before the Paris world championships in 2003 when Holmes felt completely crushed. Her physical state had infected her judgment and self-harming became a release for her misery.

"I was at the depths of despair, but I didn't know who to talk to. On one side of me I was dying and the other side I was living for my dream to be Olympic champion," she said.

"It was just a massive outlet of crying without being able to cry to someone. I didn't want anyone to know. I didn't want my opposition to know I was weak and back then in 2003 you didn't talk about mental health. I didn't know about having a breakdown, becoming a self-harmer to being depressed. I didn't know what that meant."

Holmes went on to talk about retirement when another bout of depression followed, but she has since been able to use her influence to openly discuss mental health problems.

The death of her mother, Pam, in 2017 was "the worst day of my life", Holmes told Murray. "That was also the last day I self-harmed because as I was cutting myself I knew that it wasn't going to bring her back and it wasn't helping me. I wasn't going to feel better.

"I learned to control my actions around my emotions. It gave me a strength of character to know that 'I don't care what people think about how I look' and perception of what people might have of me, box that people might put me in. It's like 'I'm going to live my life now and be who I want to be because she can't'."

Holmes feels there is still something missing in her life, revealing: "I've got another gold medal to get somewhere."

She's not satisfied with being the Colonel, the Dame, double Olympic champion, ex-military person. Holmes is still determined to drive herself and motivate others in the process.