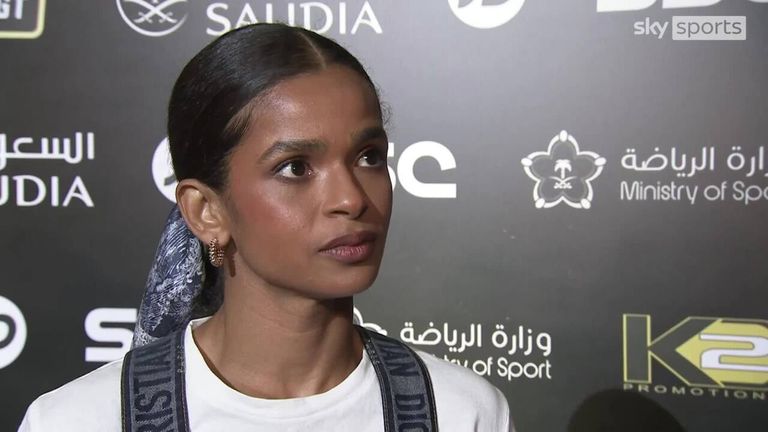 Ramla Ali, who will make history when she faces Crystal Garcia Nova in the first professional women's boxing match in Saudi Arabia, is hoping their fight can be a catalyst to inspire young female boxers

Ramla Ali is proud to be making history when her and Crystal Nova step into the ring on the undercard of the heavyweight title showdown between Anthony Joshua and Oleksandr Usyk.

Ali hopes their clash will help inspire women and girls to participate in any sport, not just boxing, and the 32-year-old is honoured to be playing a part in an historic occasion whatever the fight's outcome.

"World records will be broken on the track or when you're doing the 100m, you might have the world record at that time and two months later someone will beat it," Ali said.

"But for me and my opponent Crystal, we will be the first women in history [to box professionally in Saudi Arabia] and no-one can take that away from us.

"We will cement our names and it will be there forever, and I know along the way we'll be inspiring so many young girls and women to not only take up the sport of boxing but take up sport in general."

Ali's determination to ensure her clash with Nova leaves a lasting legacy is underlined by the fact she will spend Thursday building up to the fight in Jeddah holding a boxing class which around 30 to 40 women and girls are set to attend.

We will cement our names and it will be there forever, and I know along the way we'll be inspiring so many young girls and women to not only take up the sport of boxing but take up sport in general.

In the ring though, Ali is aiming to maintain her unbeaten record in her seventh professional contest and has her sights set on fighting for a world title of her own in the near future.

"I'd love to have one final fight at the end of the year, hopefully for a title, so I'm working towards that," Ali said.

"I've had an incredible camp. I'm so incredibly blessed to work with my coaches, and I feel like their experience has helped me become so ready for this fight.

"I'm 100 per cent ready to put on a great performance on Saturday. I know my opponent is game and together we're going to show women deserve to be on these big stages and we deserve to box in Saudi Arabia."