Kell Brook will have no problems against Frankie Gavin, says Carl Froch

Carl Froch knows Kell Brook well and is nothing but impressed with his new outlook as he defends his IBF title against Frankie Gavin...

Frankie Gavin might make things awkward for Kell Brook but that's about it.

In fact the Brook of old might have caused himself more problems but nowadays, I just have Kell down as a great fighter, simple as that.

Book via your phone, online or Sky remote. To record the event record via your Sky remote

Ever since that stabbing incident last year following his world title win, he has been given a new lease of life, a second chance at his career, and it seems to have also changed his life.

There were always question marks against his dedication, the way he lives outside the ring, but they seem to have been put to bed in his own mind. 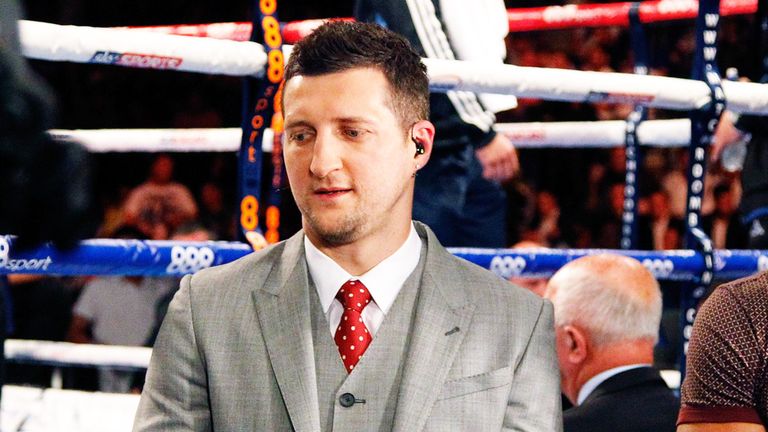 I can only see Kell getting better and better now he's got that self-belief and that means there will not be any sort of uspet on Saturday night.

Kell is now taking boxing very, very seriously, and he needed to do that.

He always turns up in great shape - his body is always on point - but he just seems to be boxing with a little bit more concentration and desire.

Beating Shawn Porter in his own backyard and taking his world title was unbelievable but even that first defence against Jo Jo Dan was class.

I can only see Kell getting better and better now he's got that self-belief, and that means there will not be any sort of uspet on Saturday night.

Don't get me wrong, I think Frankie will make things awkward for a few rounds, so fair play to him.

He is the only British fighter to have won a World Amateur Championship, which is almost as good as winning the Olympics. It's just we all hoped he'd have done more as a pro.

Maybe he hasn't - like Kell at times - taken it seriously enough, or maybe he has just realised that he is not as good as a professional as he thought.

Either way, Kell Brook will get him out of there, maybe sooner rather than later.

Book Brook v Gavin, also featuring Joshua, Mitchell and Selby, live and exclusive on Sky Sports Box Office, May 30, via your phone or online now. If you want to record the event, book via your Sky remote. skysports.com/brookgavin