Anthony Ogogo on injury, retirement, hope... and an eye for an eye

“I could be bitter and angry for the rest of my life but where would that get me?”

Anthony Ogogo is finally ready to accept his fate from the sport which has treated him so cruelly, writes James Dielhenn.

Ogogo is not retiring. Not yet. Exile has been forced upon him for two-and-half years and he continues to rail against it, but at last, he has found peace as the nightmare nears its conclusion.

The future of his career-threatening eye injuries is not in Ogogo's hands any more despite the thousands spent and the tears wept. Accepting this has become his final path back to the ring.

"It's not a case of walking away. If I can't do it, I can't do it," Ogogo exclusively told Sky Sports. "I'm not walking out of the club, I'm being removed by the bouncer."

Six-and-a-half years after he proudly stood shoulder-to-shoulder with Anthony Joshua at the London 2012 Olympics, things should have been so different for Ogogo. His plight is a reminder of the fragility of a boxing career.

He won bronze at the Games. Shoulder and Achilles issues delayed his rise but Ogogo was talented, smart and looked a million dollars. He was snapped up by Oscar De La Hoya's Golden Boy Promotions, boxed in America, and shone on a Joshua undercard that also included George Groves, Dillian Whyte, Chris Eubank Jr and Conor Benn. That was the company Ogogo kept in the summer of 2016.

It came crashing down when an eye injury was exposed in his 12th fight against Craig Cunningham. Swinging and missing haphazardly, something was clearly wrong and the towel came in after eight disastrous rounds. A broken bone in his eye socket, a similar injury to the one sustained twice by Kell Brook, was just the start of Ogogo's downwards spiral. He was later diagnosed with having just 78 per cent vision in both eyes.

Two years of tortuous hospital visits culminate soon, when Ogogo must make the dreaded decision of whether to box again.

"No more operations can be done," he said after a sixth surgeon tried to restore his eye, his hopes and his dreams.

"I've had 17 years of sacrifice going into [the latest operation], which was overwhelming. I've kept the hurt of the past few years to myself but now I want the world to know my struggles. It was a tough time but I'm still biting down on the proverbial gum-shield.

"After my fifth surgery there were complications and I thought: 'I can't keep doing this'.

"I've given it one last roll of the dice. The muscle that has been operated on can never be touched again so this is definitely the last operation.

"If I cannot box again, I'm now in a place in my life where I have tried everything. I have had six operations and spent every penny that I've ever earned on my eyes. If I still can't box then it just isn't meant to be. But at least I can go out knowing that I've tried everything."

Done for the day. Athletes/Sportsmen and women often get criticised for many things, a criticism I hear a lot is athletes aren’t honest or they aren’t real, or they are un-relatable anymore. I’m going to drop some videos this evening that are 100% honest, real and relatable. pic.twitter.com/ZK5beemMvP

In a few months' time it will become apparent to Ogogo just how far away his ambition of a comeback is.

"Openly, honestly and candidly - my eyes are better now than before my sixth operation. I've got 11 weeks for my eye muscle swelling to go down. Then I'll try sparring. Then I've got to hope that my eye [can withstand a punch]. Then I apply for a licence. Then I'm back in the ring. There's a few ifs and buts."

Boxers are notoriously too tough for their own good. Remembering the fight when his injury unravelled, the one gnawing frustration that Ogogo repeats is the result.

"I've blocked this fight out of my life but I remember two things," he said.

"Firstly; I could hear him breathing and I swung a right hook thinking 'I'll knock him out then get my eye fixed'. I missed by a country mile and almost did a full spin because he was actually six feet away from me.

"Secondly; I saw him six feet away so backed away and shook the lactic acid out of my arms and got whacked by a straight left hand. I thought he was six feet away but he was right in front of me.

"I'm lucky Cunningham wasn't a big puncher. Two fights later I was being lined up to fight Saul 'Canelo' Alvarez. I'm grateful it didn't happen against a monstrous puncher."

Only in hindsight can Ogogo appreciate that the actions of his trainer Tony Sims may have prevented further injury.

"I didn't tell him I had an eye injury because I knew he'd pull me out. Tony asked how many fingers he was holding. I couldn't see so I guessed four.

"He wasn't holding any fingers up. So he threw in the towel.

"It wasn't really a fight. People who care about me and love me thought the injury [was worse]."

The doctor's immediate reaction was that Ogogo would never restore his vision to an adequate level to fight again, which served only to bring up bad memories of having to defy medical professionals a decade earlier.

He was advised as an 18-year-old with a dislocated shoulder that he would never recoup the power to pursue a boxing career - "Everything I have done in my career since then, I had been told that I wouldn't do," he remembered through gritted teeth.

Ogogo's bloody-mindedness is commendable but the dedication required to rehabbing his eye forces you to question whether it is a doomed mission. He has remortgaged his house to pay for expensive treatments in the United States. He has forged a reality TV career by dancing, diving and surviving, copping online criticism from people who don't understand.

"If only they knew," he sighed. "This has killed me emotionally, physically and financially.

"I have done this not knowing that it will make me fight again. Even now, my eye could get into a really good position, then go when I spar for the first time."

Boxing hasn't been fair to Ogogo. Remarkably, the desolation of the past two years isn't even the worst time he has endured. Heading into the 2012 Olympics his mother suffered a brain haemorrhage - she recovered but the experience tainted the London Games, and how Ogogo reflects on his biggest accomplishment.

"I've never looked back fondly. I didn't want to be there. I didn't want to fight. My sisters convinced me that when she got better, she'd feel guilty knowing that I never went. I went to London thinking I'd never see my mum again.

"I used to sneak out of the athletes' village at 2am to visit my mum in hospital then come back for 6am. Nobody knew.

"Under the hardest of circumstances I can still push through and get something - that's what my medal means to me." 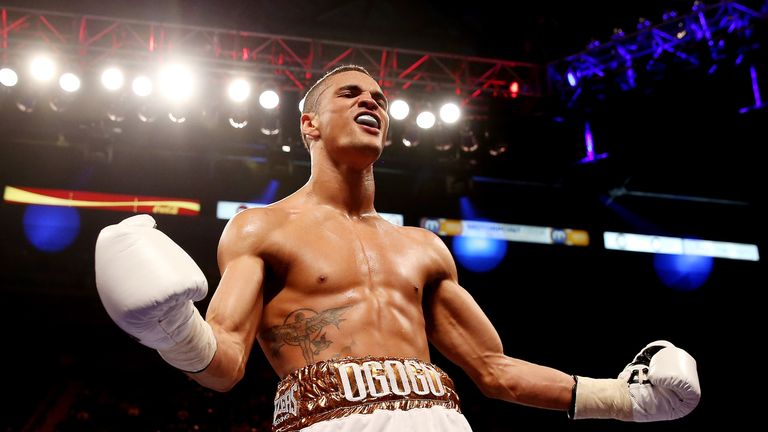 When I'm back at the top of the mountain, it will have been worth it. But it's hard to see that now.

Perhaps that perspective has helped Ogogo deal with his eye injuries. The motivation behind his latest recovery is to help other people who find themselves in a far worse state. Ogogo can't do any more for himself but he can do a lot for others - his new fitness app, Seven-Minute KO Fit, is just one part of that plan.

If his strife ultimately comes to nothing, will the heartache have been worth it?

"When I'm back at the top of the mountain, it will have been worth it. But it's hard to see that now.

"I could be bitter and angry for the rest of my life but where would that get me?

"Whatever I do, I'll take all the zest I used in boxing and put it into that. Then I'll become the world champion of whatever that is."