Katie Taylor is one world title away from becoming an undisputed champion, so we asked her to offer insight into her training plan, dietary regime and other secrets to success...

Ireland's unified lightweight champion added the WBO belt to her WBA and IBF titles with a ninth-round stoppage win over Rose Volante in Philadelphia earlier this month.

Plans are in place for Taylor to battle WBC champion Delfine Persoon on the Anthony Joshua-Jarrell Miller bill in New York on June 1, live on Sky Sports Box Office, as the 32-year-old attempts to collect the last remaining title.

Before this potentially monumental night at Madison Square Garden, Taylor has offered insight into her fitness regime, technical work and the mindset of a world champion...

How do you start your training day?

In the gym in the morning times, it's either a strength session, or a run session.

How far do you run?

I don't really have a set distance. It changes from session to session. It could be maybe a sprint session, a hill session, or we could be running up mountains.

A lot of hill runs actually, it's so important that your legs are strong. I train in Connecticut, so there's a lot of mountains there, and even the road ones are very hilly at times.

That's probably my worst kind of session. I absolutely hate running sessions, but it's part and parcel, and those are the sessions that make the difference.

Can you describe the strength sessions?

My coach is actually really old school, we do nothing fancy during training. We do bench presses as well as squats. Those are the things that never go out of fashion.

What do you have scheduled later that day?

I go back and rest and recover between the sessions, get a bit of food into me, and then the next session will be four or five in the afternoon.

That could be a pad session, a technical session, or a sparring session. Just in the gym boxing, throwing punches.

How can you still improve throughout your career? 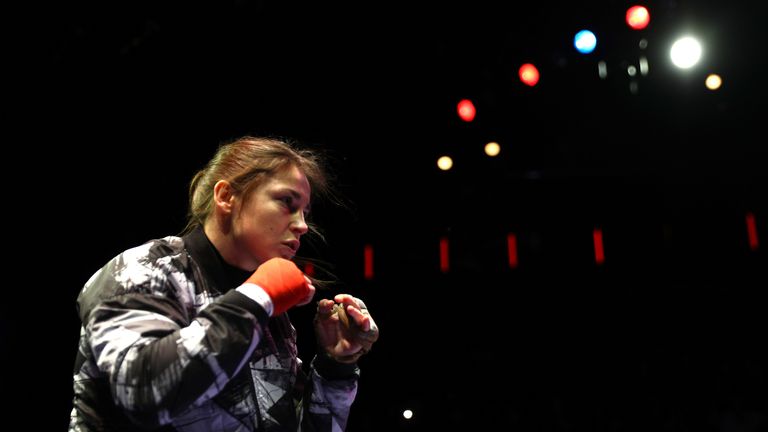 You always learn in the gym, and it's a great feeling when you are feeling sharp.

I think it's important to have a bit of variety in your sessions, but the variety can be a bit simple, maybe even a new combination during the pad session.

We do eight or ten rounds of pads. I love a pad session or a sparring session. They are always my favourite kind of sessions, because you're in there doing what you actually love - punching and trying your combinations.

Media workout today for @katie_t86. Fight night is Friday in Philadelphia at the @liacourascenter live on @dazn_usa and @skysports. Three world titles on the line! #boxing

You always learn in the gym, and it's a great feeling when you are feeling sharp. We try to end each session with a few press ups and sit ups. Always maintaining that strength.

How often do you spar?

We spar two or three times a week coming up to a fight. The rounds can vary. We could do up to six to 12 rounds really during the spar, so it depends on where we're at, coming closer to the fight.

We have had a solid group of guys that we spar, but there's always news guys coming in as well to keep me fresh. It's always good to spar someone different and someone new, because it's a bit of a challenge and it's good to try and work out that spar.

What is your daily diet plan?

During the training camp, in the mornings I usually eat porridge with berries and fruit, and a bit of Manuka honey on top, just to sweeten it up a small bit.

In between sessions, it's important to get some carbs and some protein. As far as protein, I love a bit of salmon, a bit of chicken is good as well. I eat really regular, three meals a day. In the evening, it could just be a bit of protein.

I make the weight quite easily. I don't go too far above 135lbs [lightweight limit]. I probably walk around at maybe 140lbs. I don't really have much to lose, but the last couple of pounds is always hard.

What advice would you give to a young boxer?

You have to put absolutely everything into your craft. There are days when you're not going to be in the mood for training, but they are the days which are most important.

They are the days when you have to push yourself to the gym and put everything into those sessions.

Slow and steady wins the race. Every single day, just hone your craft, just turn up to the gym, and just work on those things. Eventually you will see your progress.