Prograis vs Taylor and Chisora vs Price: The farm is Derek Chisora's secret haven

Chisora: Off Limits - Watch On Demand now, ahead of Saturday's fight with David Price live on Sky Sports Box Office 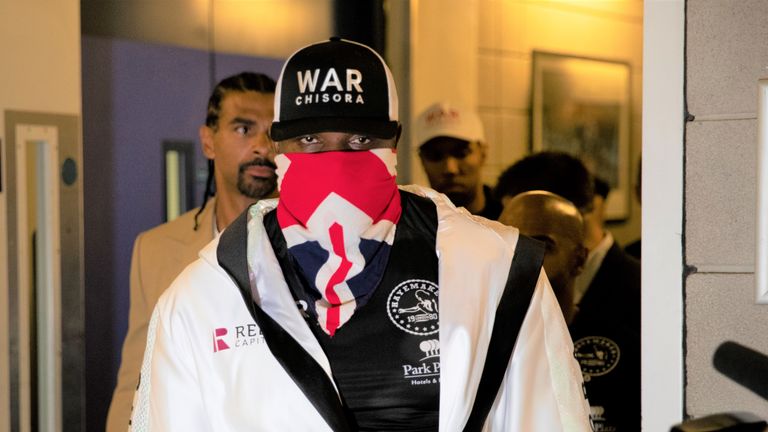 Derek Chisora’s eyes light up and his voice suddenly goes high. He is cooing over a new-born calf.

Welcome to the farm - this is the unlikely solace for the heavyweight hero, the controversial but beloved stalwart of the British boxing scene.

It is completely bizarre to learn that the great outdoors, on this farm, is Chisora's happy place. When he isn't flipping tables, angering officials or dishing out beatings, he is here on the farm. Often alone, except for the animals which he looks after.

And on this occasion, he is caring for the latest addition to the family, the calf, which he immediately visits to deliver a loving caress. This is a side to the man known as 'War' that has never been seen before.

He looks the part, too, wearing wellies, gloves and a farmers' jacket. He is, admittedly, the only farmer who adds a 'War Chisora' snapback and a bandana to the traditional look.

So how did this become a thing? How did a dangerous heavyweight contender discover a love for agriculture?

"When I'm here, when the gate closes, I shut off. I shut off from everything," Chisora says.

Chisora is typically mysterious but life on the farm is nothing new for him.

He has cows, sheep, Shetland ponies, horses (which he knows how to ride) and two reindeers.

The sheep know their master has arrived because, to break the silence of the countryside, Chisora bellows "baaaa" at the top of his voice when he sees them.

He has a bag of apples when he arrives, and munches one himself while hand-feeding the rest to his cows.

Chisora lights up when explaining that a pig, contrary to its reputation, is actually the cleanest animal of them all.

The former world heavyweight title challenger rides motorbikes and quadbikes, and shoots clay pigeons, on this land which is a million miles from a boxing ring.

The farm helps his training, too.

He has been known to take natural ice baths in ponds during the winter. He will retreat back to his peaceful solitude between monster sessions at David Haye's gym.

Chisora's manager Haye, for his part, is hilariously out of his comfort zone on his first visit to the farm.

Would Chisora ever build a gym here, to combine his two loves?

"No," he barks back. They must remain very separate. He does not talk about boxing when he is on the farm.

The most major change in Chisora's life in recent times was becoming Born Again - his reaffirmation means a cleaner lifestyle and a more dedicated approach to his day-job.

"I needed a bit of faith in my life, bro," he explained. "It has given me guidance, life-wise. It has helped my boxing and helped my life."

Perhaps this countryside retreat reminds Chisora of a childhood spent in Zimbabwe, before the noise and chaos of London became home.

This farm, and the peacefulness away from social media clips of his latest antics, is where Chisora gathers his thoughts without distraction and prepares himself to step back into battle.

Watch the WBSS final and Chisora vs Price on Saturday, live on Sky Sports Box Office, from 7pm. Book it via your Sky remote or book it online here. Even if you aren't a Sky TV subscriber you can book and watch it here.