"My personal opinion? If Joshua makes a sidestep in a moment where the boxing audience expects a rematch it would show weakness"; Vitali Klitschko has told Anthony Joshua to press ahead with rematch against Oleksandr Usyk 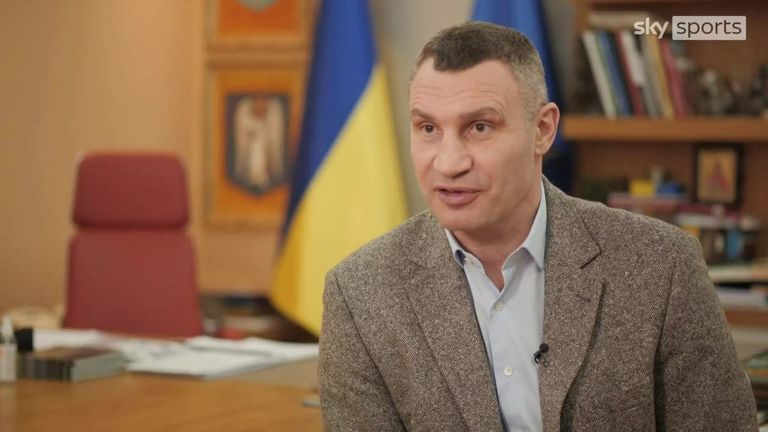 Vitali Klitschko has advised Anthony Joshua not to step aside for Tyson Fury, and fight Oleksandr Usyk in a rematch

Anthony Joshua would "show weakness" if he does not fight Oleksandr Usyk for a second time, Vitali Klitschko has warned.

Joshua triggered a clause for a rematch with Usyk after losing his IBF, WBA and WBO heavyweight championships but the fight has still not been finalised.

Tyson Fury's call-out of Dillian Whyte is a clear indication that they are likely to meet next in a WBC title fight, paving the way for Joshua and Usyk to clash.

Joshua had previously denied reports he would accept £15m to step away from his contracted rematch to allow Fury and Usyk to fight.

"But my personal opinion? If Joshua sidesteps in this moment, when the boxing audience expects a rematch and wants to see Joshua vs Usyk, it would show weakness.

"Joshua, don't do that please.

"As fighters, we fight not just for ourselves but for the audience. The audience decides. If the audience wants the fight, it must happen.

"If Joshua sidesteps, I am not sure that the interest in Joshua would be so big in the future."

Vitali held the WBC belt while Wladimir Klitschko was IBF, WBA and WBO champion as the brothers from Ukraine dominated the generation of heavyweights prior to Joshua and Fury.

Wladimir was eventually beaten in world title fights by both Fury and Joshua.

But now Usyk, the Klitschkos' compatriot, has brought some of the heavyweight gold back to Ukraine.

Vitali Klitschko added: "Everyone expects the rematch between Usyk and Joshua. Usyk is so strong or did Joshua make mistakes? Who is stronger? That question interests every boxing fan. Let's receive an answer. That's why this fight must happen.

"He can give the answer in the Usyk fight.

"If Joshua beats Usyk there will be huge interest [in Joshua vs Fury]. It will be the main fight of the past 10 years.

"Joshua is a classic boxer, Fury is unorthodox. Both are punchers, both can decide the fight at any moment.

"Both are world-class fighters and can knock each other out at any second."

Asked to predict the winner if Joshua faced Fury, Klitschko said: "No expert can expect the decision in fights, especially with heavyweights where one punch can decide.

"That is why boxing is so interesting.

"Heavyweight fighters are like gladiators and have huge attention from the whole world."

Klitschko retired a decade ago with 45 wins in 47 fights but admitted to occasionally sizing up Joshua and Fury: "I am not active anymore. But sometimes I feel that, if I were younger and in shape, these would be a good fights.

"I know the key to both fighters."