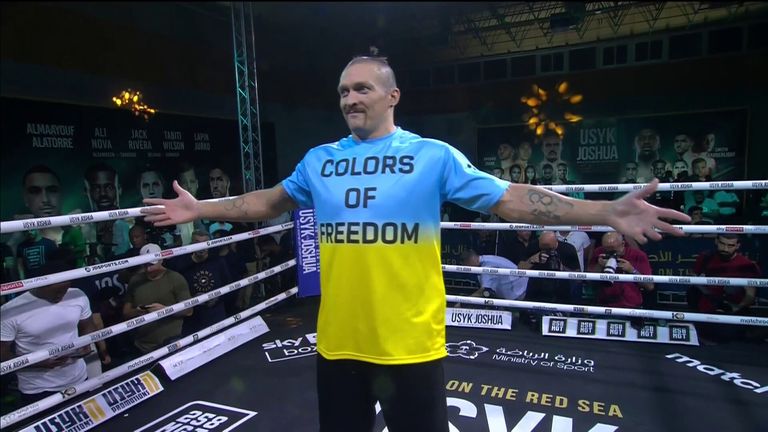 Oleksandr Usyk was reluctant to give any details on his weight, saying everyone should wait until he hits the scales

Oleksandr Usyk appears to have packed on muscle mass for his rematch with Anthony Joshua, live on Sky Sports Box Office this Saturday.

Usyk is the smaller man who, though previously an undisputed champion at 200lbs, stepped up in weight to upset Joshua last year.

In September at the Tottenham Hotspur Stadium in London he handled Joshua's advantages in height and reach in their first fight, but the signs are he has piled on more bulk for the rematch. 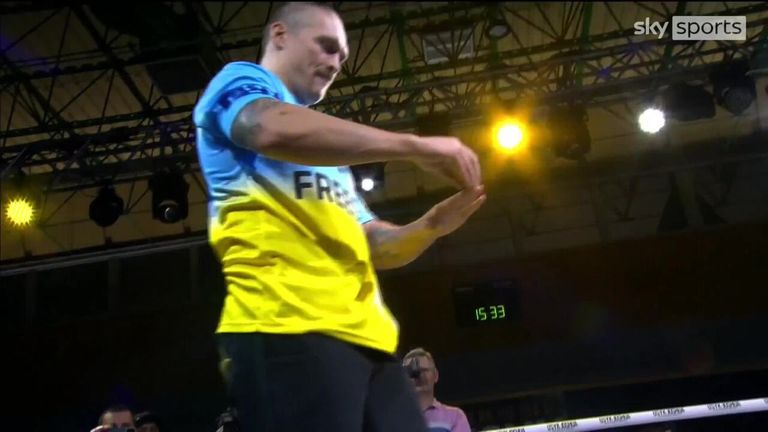 Usyk displayed his cat-like reflexes with a stunning coin trick at the media workout for Saturday's rematch with Anthony Joshua, live on Sky Sports Box Office

British star Amir Khan saw Usyk in camp in Dubai as he prepared for Saturday's showdown.

Khan claimed: "He put on an extra 15kgs and looked tremendous."

Usyk himself has not actually revealed how much extra weight he might have added to his frame. That will only be determined at the weigh-in on Friday.

The champion's conditioning certainly made an impression on Khan, though. "After seeing him work out, he impressed me," Khan said.

"Usyk looked in great shape. He said he's focused and ready and is very confident."

Putting on extra weight does have implications for Saturday's fight. It was Usyk's speed, movement and agility that were so crucial in last year's victory over Joshua.

The contest this weekend then will be unpredictable. "Hard to say, 50-50 who wins," Khan added.

Former cruiserweight champion Johnny Nelson believes it indicates both fighters will be going for a knockout.

"The fact that it looks like he's coming in heavier, will that be a detriment to his style? I think it will," Nelson said.

"As a cruiserweight he had everyone's number, as a heavyweight he's going through trying to find his feet. Yes, he beat Anthony Joshua, he struggled but got the win with Derek Chisora. Now he's filled out even more, will he have the same movement, fluidity, speed? Will he be able to keep that up for 12 rounds? I've never seen him fighting, boxing, looking so heavy.

"His movement and agility has been his godsend so now, things have changed he might be a bit more flatfooted, he might punch harder.

"Naturally, Anthony Joshua is the bigger guy out of the two of them. So now Usyk has artificially put that weight on to challenge Joshua and it looks like both fighters are going for the knockout."