Manny Pacquiao has no chance of winning Saturday's superfight, according to the man dubbed 'the Welsh Floyd Mayweather'.

Barry's finest featherweight Lee Selby is out in Las Vegas training in Mayweather's gym ahead of his own world title fight - a May 30 challenge for Evgeny Gradovich's IBF belt.

And, after witnessing the unbeaten American's final preparations first-hand, Selby is convinced Pacquiao will not make the final bell in the live Sky Sports Box Office showdown.

"Now it's fight week the gym is buzzing," Selby told Sky Sports News HQ. "We've got a good connection with the gym, so we get to stay behind and watch the sparring, and watch him train. It's an experience you can't buy - I try to learn what I can and add it to my own game.

"When he works he works hard - he's renowned for being one of the hardest trainers in sport, although he has a joke and you see him singing and dancing in the ring.

"When the fight was made I thought Pacquiao would have a chance of giving him problems, but I've seen them head-to-head now. With the size of Mayweather and just his ring generalship I predict him knocking Pacquiao out. 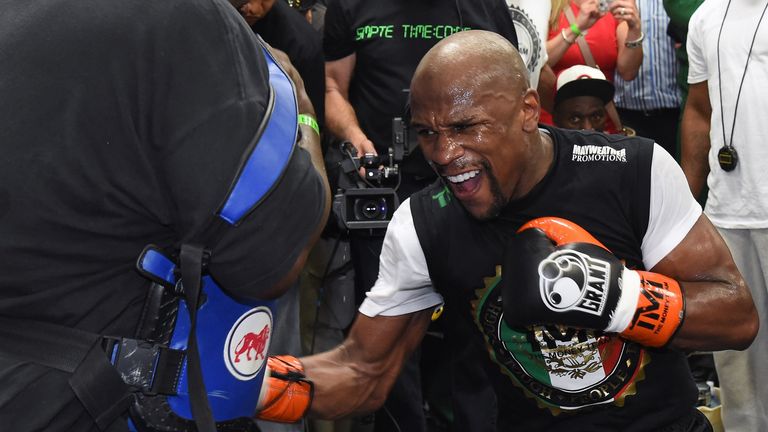 When he works he works hard - he's renowned for being one of the hardest trainers in sport, although he has a joke and you see him singing and dancing in the ring.

"I'm that confident. I think it might be competitive early on until Mayweather figures Pacquiao out, and then a late stoppage."

Selby may have a ringside seat at sparring, but with no ticket for the main event he admits he will "probably watch on the big screen" come fight night.

As for that nickname, Selby is already one down on the real Mayweather having been beaten early in his career, but the tag is one he enjoys.

"Boxing News dubbed me 'the Welsh Mayweather'," he said. "I woudn't like to tell Floyd that, he might get insulted, but it's the best tag to have in boxing isn't it? Mayweather's the best fighter, and it's a privilege."

And the 28-year-old is determined to do justice to the compliment when he meets Gradovich. He said: "I'm preparing the best I can, I've got the best-quality sparring and I'm going into the fight at 100 per cent."