Barry Hearn believes Amir Khan is "petrified" of Kell Brook as he fears the IBF champion could ruin his hopes of a fight with Floyd Mayweather.

Brook makes the second defence of his welterweight title against Frankie Gavin this Saturday night at The O2 in London, live on Sky Sports Box Office.

Khan also returns to the ring this Friday night, taking on Chris Algieri in New York, and appears to be pursuing an elusive fight with Mayweather, rather than an all-British battle with Brook.

Talks have broken down over a clash between the domestic rivals, despite growing public demand and the lure of a major venue and lucrative pay day.

Hearn, chairman of Matchroom Sport, who promote Brook, has suggested that Khan’s ambitious plans - and even his career - could be shattered if he faces the Sheffield man.

"I think Kell Brook is an amazing fighter. I think outside of Mayweather, he is without doubt the No 2 and maybe the No 1 welterweight in the world," Hearn told Sky Sports. 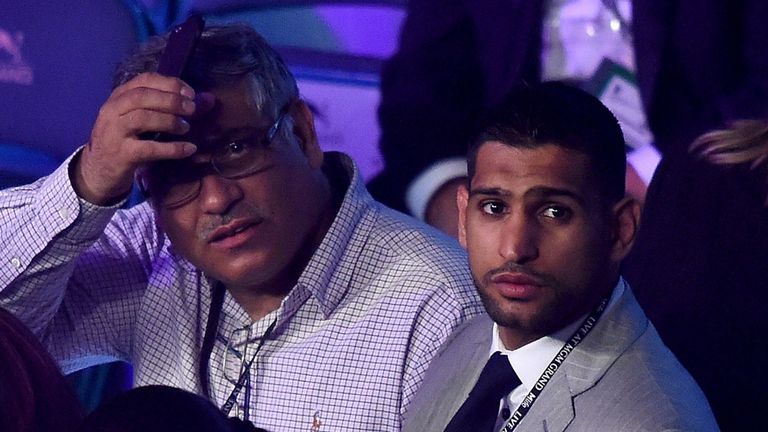 Khan is petrified about him, because if Khan gets beat by a Mayweather or a Pacquiao, he can still fight Kell Brook in his mind.

"He's unbeaten, he's young, and I don't think Mayweather will go near him because he's risky.

"Khan is petrified about him, because if Khan gets beat by a Mayweather or a Pacquiao, he can still fight Kell Brook in his mind. His value is going down, but if he fights Kell Brook first and gets beat, then that’s probably the end of Amir Khan - and frankly we are a huge odds-on favourite for that fight."

Hearn is still hopeful that Brook-Khan can take place in the future, but questioned whether the Bolton man genuinely wants to share the ring with the 'Special One'.

"Obviously we want the fight, but I don't see Amir Khan taking it," he said. "I think he would rather fight light-welterweights like Chris Algieri and get a points win.

"I would like to think that it could happen next year.

"We have offered him almost treble the money he’s been making. He doesn't want it and I don't blame him necessarily. I think Amir Khan knows his boxing, I think he knows his chin and he knows that Kell Brook is a huge animal at welterweight."

Book Brook v Gavin, featuring Joshua, Mitchell and Selby, live and exclusive on Sky Sports Box Office, May 30, via your phone or online now. If you want to record the event, book via your Sky remote. skysports.com/brookgavin