The Hundred: Trent Rockets make it three wins from three as spinners star against London Spirit

Rockets continue 100 per cent start to men's Hundred with seven-run victory over Spirit; D'Arcy Short named Hero of the Match after scoring 69; batters struggle as spin bowlers take all 12 wickets to fall

Trent Rockets continue to set the pace in the Hundred! A third win from three was secured against London Spirit at a raucous Lord's on a night when the spinners stole the show.

The Rockets put their fans through the mill for the second game in succession, making heavy weather late on of defending 123-4 - three days after sneaking home against the Northern Superchargers. 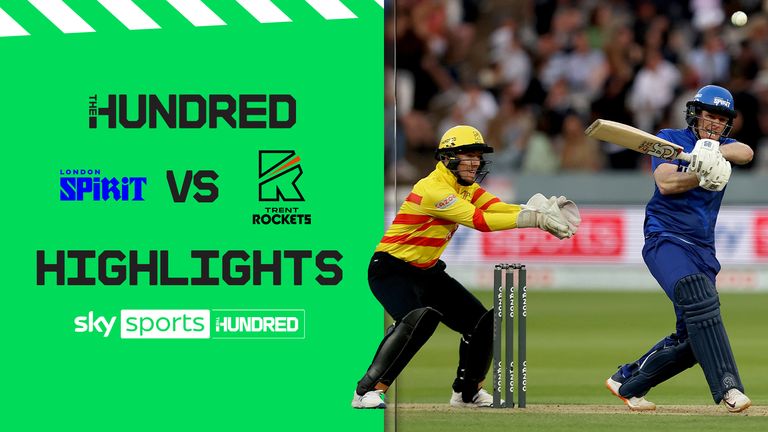 D'Arcy Short was the one batsman to operate with any kind of sustained authority in the face of some suffocating spin bowling on both sides, and the Australian finished the evening as the top run-scorer in the men's tournament after an unbeaten 69 kept his side afloat.

Spirit - still winless after three fixtures - lost three wickets during the powerplay in response and resorted to ever-more desperate flailing, their last genuine hope of victory disappearing back to the Lord's pavilion with Eoin Morgan after the captain had failed to clear the ground's longest boundary.

Blake Cullen, batting at 10, had other ideas as he faced up to 90mph Marchant de Lange and clattered the fearsome South African for six, but the home side had left too much to do and came up short at 116-8.

Brilliant balance from Wood on the boundary and Morgan has to go! #LondonSpirit 🔵 #TrentRockets 🟡 #TheHundred 💯

The express speed of De Lange was the talk of The Hundred coming into the game, but the pacemen registered nothing in their combined wickets column as all 12 to fall went to the slower bowlers.

England skipper Morgan picked the Lord's pitch for the stodgy surface it was early on, four times keeping one of his spinners on for a second set of five deliveries - something he hadn't done at all in Spirit's one previous completed game.

The result was a spin stranglehold which denied the visitors any real momentum, but unfortunately for the England skipper his masterclass was an obvious blueprint for opposite number Lewis Gregory to follow.

De Lange did not make an appearance until the 41st ball, by which time Spirit were four down - thanks in part to two wickets in a set of 10 from the miserly Matt Carter, who took three wickets to add to his two in the previous game and also snaffled a cracker of a slip catch. Samit Patel also finished with three, and there were two for Rashid Khan. 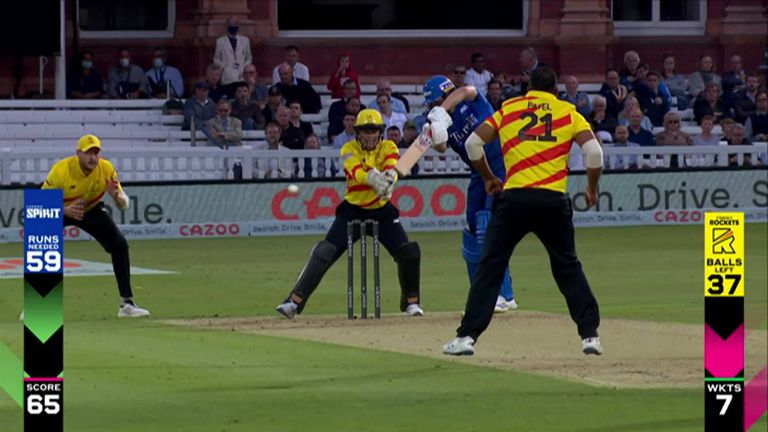 Aussie Short took the honours as the standout batter on the night, and it was the left-hander's ability to switch it on at the death and take 18 from the final five balls of the Rockets' innings that altered the course of the game.

Even on a pitch suffering under the toll of two previous women's games, Spirit would have been entitled to feel happy with their work in the field when they had their visitors 105-4 after 95.

But Short's eyes lit up at the return of a bit of pace in the shape of Chris Wood, the pick of his four boundaries in five balls a nerveless scoop over the keeper's head to round off the innings. In the swipe of a bat, Spirit were suddenly facing a total to test the nerve of a side searching for a first win.

Alex Hales' hopes of an England recall may be looking slimmer by the squad announcement, but the Rockets opener nonetheless had a chance to remind Morgan of his ability to set the tone for a short-form innings.

There were moments in his 14-ball 21 when he did just that, one flipped four to long leg the pick of a walk-on part that also included a huge six.

But Morgan's tactical acumen won the day in the end as his decision to keep off-spinner Mohammad Nabi on for a second set of five balls brought immediate reward - Hales charging, missing and walking as Adam Rossington provided the glovework behind the stumps. 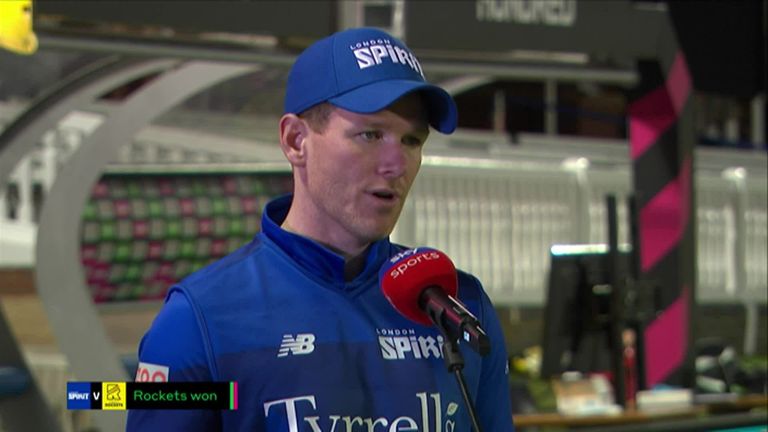 D'Arcy Short: "To be honest I was looking for 150 at the start, but that last over helped us out a bit. Slow pitch, ball turning and holding a bit... it was tough to get going. It was ether hit out or get out at the end - I was just looking to get as many to the boundary as possible."

Eoin Morgan: "Another fantastic game. It was outstanding to see such an electric atmosphere at the home of cricket.

"We're gutted we didn't win - I thought we handed them the game. We've got to take on more responsibility. We didn't deserve to win."

Friday brings the return to the fray of Southern Brave, whose men's and women's teams have had polar opposite starts.

A double-header against Birmingham Phoenix at the Ageas Bowl represents a chance for Anya Shrubsole to mastermind a third win from three matches, while James Vince's team are yet to get off the mark after back-to-back defeats.

As for the visitors, both sides have won once and lost once. The men's batting line-up has plenty to prove after being spun out by Manchester Originals' Matt Parkinson last time out, but the momentum is with the women after their win at Old Trafford.