Northern Superchargers claim their first win of The Hundred to move off the bottom of the table; Oval Invincibles suffer their first defeat of the tournament; Adil Rashid takes three wickets and Harry Brook hits unbeaten 47 from 30 balls; Jason Roy's 52no from 43 balls in vain 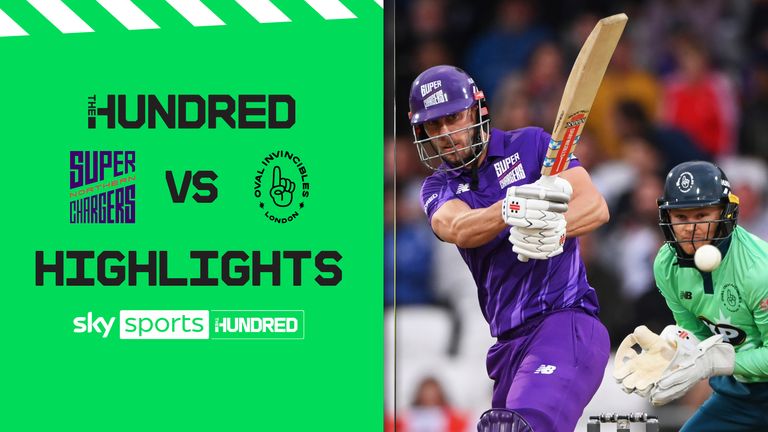 Northern Superchargers are up and running in The Hundred after Adil Rashid showed his class again and Harry Brook enhanced his ever-growing reputation against Oval Invincibles.

Adil Rashid took three wickets and Harry Brook thumped 47 not out from 30 balls as Northern Superchargers beat Oval Invincibles to record their first win of The Hundred.

The Invincibles found themselves in real trouble after Rashid had dismantled their middle-order and needed some impressive hitting from Jason Roy (52no from 43 balls) and Tom Curran (34no from 24) late on to get them up to 127 from their 100 balls.

That looked very competitive when the Superchargers lost Adam Lyth and David Willey early but Brook came in and despite Chris Lynn (48 from 48) struggling to ever really get going, a partnership of 74 put the home side in a strong position.

Batting was tough at Headingley but Brook, the leading run-scorer in the men's competition, was making it look anything but, and took the Superchargers to the brink of victory.

Simpson smashes a MASSIVE six to finish it off for #NorthernSuperchargers 🟣 - they have their first win of #TheHundred 💯!#RainbowLaces 🌈 | #OvalInvincibles🟢

John Simpson played his part as well with an entertaining cameo and the left-hander finished it off in style, hitting a huge straight six back over Curran's head to complete a first win of the tournament for the Superchargers and condemn the Invincibles to their first defeat.

RASHID PUTS INVINCIBLES IN A SPIN

The England leg-spinner is a world-class performer and proved that yet again, on his home ground, with three wickets that left the Oval Invincibles innings in tatters.

Not only did he take wickets, Rashid's 20 balls cost only 13 runs as he bamboozled the Invincibles batters, who just could not pick which way he was going to be spinning it.

Even those who could pick him did not want to risk attacking the spinner after Colin Ingram had been dismissed doing just that. Laurie Evans eventually decided it was worth the risk only to suffer the same fate as Ingram before Rashid got rid of Jordan Clark with the very next ball, albeit he could not take all the credit for that one...

CATCH OF THE MATCH

A wicketkeeper by trade, Dane Vilas was without his gloves for this match but it turned out he didn't need them to take a brilliant catch at slip! With Rashid causing all sorts of problems, the Superchargers went on the attack and it worked a treat. The bowler located Clark's outside edge, the ball flew very quickly towards Vilas, who moved to his left and managed to push the ball up and take it at the second attempt as he lay flat on his back!

It is not often a Lancashire captain brings a Headingley crowd to its feet in celebration but Vilas managed it here!

SHOT OF THE DAY

It was a disappointing day for the Invincibles but it could have been an awful lot worse without Tom Curran. The Surrey man may be best known for his bowling but it was with the bat that he made his mark in Leeds.

With the Invincibles six down after just 58 balls, Curran arrived in the middle and with Roy finding it difficult, it was left to the new man to try and get things going - and he did just that.

Curran hit three fours in his 24-ball innings and put on 67 with Roy but the highlight of the partnership with the former's stunning straight drive for six off Matty Potts.

It was a picture-perfect shot and after making a brilliant connection, Curran held the pose as the ball sailed over the rope - glorious.

Northern Superchargers' Chris Lynn: "Our first two games were probably the most entertaining in the tournament, but we were on the losing side. It was a bit heartbreaking.

"But we showed a lot of character to get the win. Today was more of a polished performance, and we executed our skills better.

"The wickets are a lot more low-scoring, and sometimes you have to put your ego aside and play the role the team needs.

"Our bowlers were very good. Rash and Mujeeb are world-class through the middle.

"It's early doors in the tournament, and that washout point we got at Manchester may come into play." 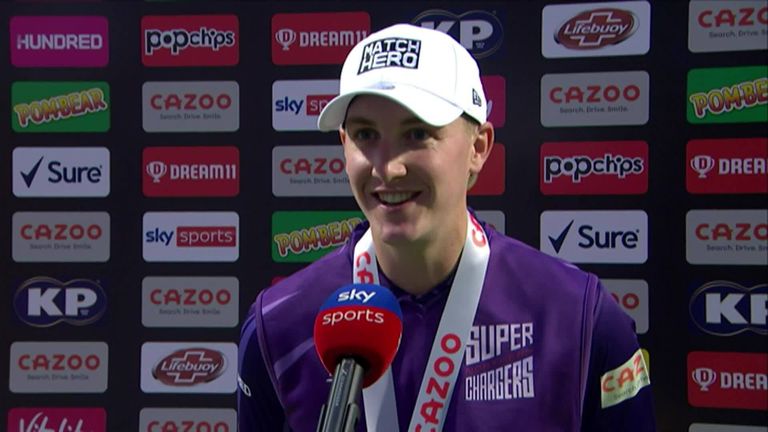 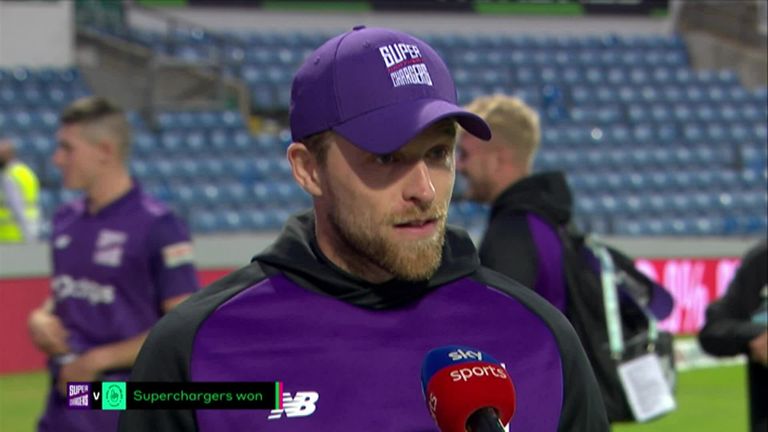 Oval Invincibles' Jason Roy: "When you start your bowling innings and you say they will need 11 off the last five, you'd be pretty happy.

"We managed to scrape to a total which was probably slightly light. But, on the top of that, we bowled extremely well. Our fielding was slightly sloppy.

"Apart from that, we can't be too down on ourselves. It took someone to get 47 off 30 balls (Brook) for them to chase it.

"It wasn't the easiest of pitches, and I definitely struggled to find some rhythm."

There are another FOUR games in The Hundred on Sunday as Birmingham Phoenix take on Trent Rockets at Edgbaston and London Spirit host Southern Brave at Lord's...