The Ashes: Jonny Bairstow says England must be 'stronger' with the bat after another collapse

"It's one of those days that we will look back on, probably reassess next time and potentially take different options. We're still searching for that big score," says Bairstow, who is confident England can make early, and much-needed, inroads on day two at MCG 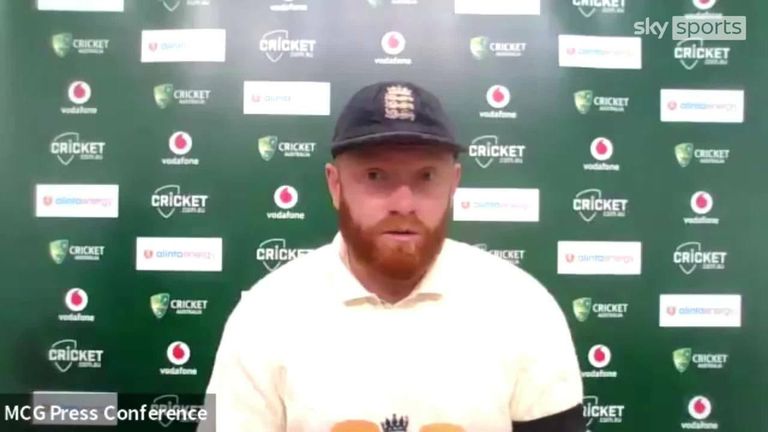 Jonny Bairstow knows England must be "stronger and tougher" with the bat after another collapse left their flagging Ashes hopes in tatters.

England were razed for 185 on a green-tinged pitch in Melbourne on Boxing Day, with the recalled Bairstow making the second-highest score of 35.

Captain Joe Root topped out with 50 but he, Ben Stokes (25) and Jos Buttler (3) were all culpable for their dismissals with poor shots against Mitchell Starc, Cameron Green and Nathan Lyon respectively.

England are 2-0 down in the five-match series and their hopes of regaining the urn will be over if Australia void defeat at the MCG.

"We've got to get a bit stronger and tougher with our dismissals," said Bairstow, who returned to the England side at No 6 in place of the dropped Ollie Pope.

"We know that and we've spoken about that, that is just being honest with ourselves. I can tell you now everyone is trying.

"It's one of those days that we will look back on, probably reassess next time and potentially take different options. We're still searching for that big score."

England were inserted after Pat Cummins won the toss and slipped to 13-2 with Cummins dismissing Haseeb Hameed for nought - the tourists' 50th duck in Test cricket in 2021 - and the recalled Zak Crawley for 12.

"When you look at the toss it didn't go our way. We'd have looked to bowl as well. Both teams were looking to bowl on that pitch, with the helpful conditions and a tinge of green," said Bairstow.

"It was no surprise to be put in. With the weather around - rain and cloud cover - it was always going to be the plan to put us into bat."

England removed David Warner before stumps - the left-hander caught by Crawley off James Anderson for 38 from 42 balls - as Australia closed on 61-1, just 124 runs behind their opponents.

Bairstow added: "We're bowling on the same pitch they bowled on.

"We've seen the pitch offer plenty throughout the day and we've got one end potentially open with a nightwatchman [Nathan Lyon] so we'll look to put pressure on him and (Marcus) Harris to get some early inroads.

"We're still in this game until the last ball is bowled."