The Ashes: Stuart Broad at his most dangerous with a point to prove, say Mike Atherton and Alastair Cook

"Tough and resilient and stubborn, all those characteristics you need to succeed at the highest level, as well as a bit of talent and skill. He's got all those things"; Mike Atherton, Alastair Cook and Moeen Ali all praise Stuart Broad's ability to perform with a point to prove

Stuart Broad’s five-wicket haul on his return to the England side for the fourth Ashes Test showed he is a bowler to be feared when he has a point to prove.

The 35-year-old seamer spoke of his frustration at being left out of the both the first and third Tests of the series, in Brisbane and Melbourne, ahead of the match in Sydney and showed what Joe Root's side had been missing as he completed his 19th Test five-for on day two at the SCG.

It was the eighth time Broad has taken five wickets or more in an innings against Australia and means he has now taken more Ashes wickets (125) than the late, great Bob Willis (123) with only Sir Ian Botham (128) ahead of him in England's all-time list.

While Usman Khawaja's century ensured it was another trying day - on a tour filled with them - for England, Broad's exploits were a bright point. 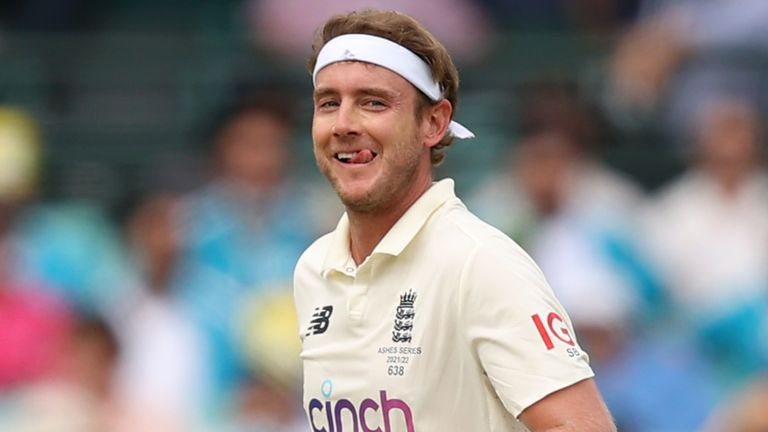 "He bowled with real aggression throughout – a brilliant bouncer to get rid of Pat Cummins. He was definitely England’s outstanding performer.”

"The straw to cling to today for England was Stuart Broad, a 19th five-for in Test cricket, he bowled really well and showed all his class and competitiveness," former England captain Michael Atherton said. "As always, when he feels he's got a point to prove, he produces.

"If you do play over 100 Test matches, which he has done, you don't play that many games at the highest level in a difficult environment without being quite tough and resilient and stubborn, all those characteristics you need to succeed at the highest level, as well as a bit of talent and skill. He's got all those things really.

"He's 35, he's not young for a bowler but he's not as old as Jimmy Anderson, and he funnelled all that disappointment of missing out at The Gabba and Melbourne - two quite helpful pitches - into his performance today.

"I thought he was excellent from the second new ball onwards. That was his first spell post-lunch, when he got rid of Steve Smith and Cameron Green.

"I thought that was his best spell of the game, of the series. He bowled with real aggression throughout - a brilliant bouncer to get rid of Pat Cummins. He was definitely England's outstanding performer."

Broad's ex-captain Sir Alastair Cook echoed that sentiment and highlighted the stature of those he dismissed.

"When he has got a point to prove, he is often at his most dangerous," Cook told BT Sport. "We've spoken a lot about his exclusion at Brisbane and setting the tone with his battle against David Warner.

"Getting two of the three big guns out in (Steve) Smith and Warner is crucial. Full credit to Stuart Broad, it's probably frustration that he hasn't played a bigger part in this series and when he has now played a part, The Ashes are gone."

Another of Broad's former teammates Moeen Ali told BT Sport: "I'm really pleased for him because obviously it's been a tough tour for the team but more frustration for him because he's not had a chance to make an impact.

"Now you're looking back at Brisbane and wondering how you can't play him? He's got all the nous, experience and skill."

Atherton was also encouraged by the performance of Mark Wood. The fast bowler went wicketless on day two despite causing the Australian batters problems throughout the day as any sort of luck deserted him.

However, with Ben Stokes unable to bowl for much of the day due to a side injury, England struggled for control when their three frontline seamers were not in the action.

"Mark Wood has bowled with great hostility throughout, he bowled quickly," added Atherton. "Anderson was fine and then there's a drop off, partly because Jack Leach is offering neither control nor threat.

"After everything that happened at The Gabba when they took him down, (Joe) Root has decided to set very defensive fields with four or five men out and now Australia are just milking him really, in particular the left-handers.

"We had this morning where England just drifted through it and Australia accumulated 82 runs, I don't think they scored a boundary in the final hour before lunch but they didn't look like getting out and, from that moment onwards, it was always likely to be Australia's day."

With the tourists toiling in Australia, and Bangladesh and South Africa picking up unexpected victories against New Zealand and India respectively, England have now dropped to the bottom of the World Test Championship.

In a new low for Joe Root's team, England sit ninth and last, having won just one of the seven Tests in the 2021-23 championship.

They have a chance to move off the bottom in the remaining two Tests against Australia, although New Zealand, sitting second bottom, can also improve their standing in the second Test against Bangladesh.

Australia and Sri Lanka lead the way with 100% records.