Jack Leach: Mark Butcher on how England spinner has turned from 'last resort' to 'major part'

Mark Butcher on Jack Leach: "He has proved me wrong and probably a lot of other people wrong. He has found drift, dip, sharp turn at times and he has the skill to be able to bowl the delivery that goes on with the arm" - Sky Cricket expert praises spinner Leach, plus seamer Matthew Potts 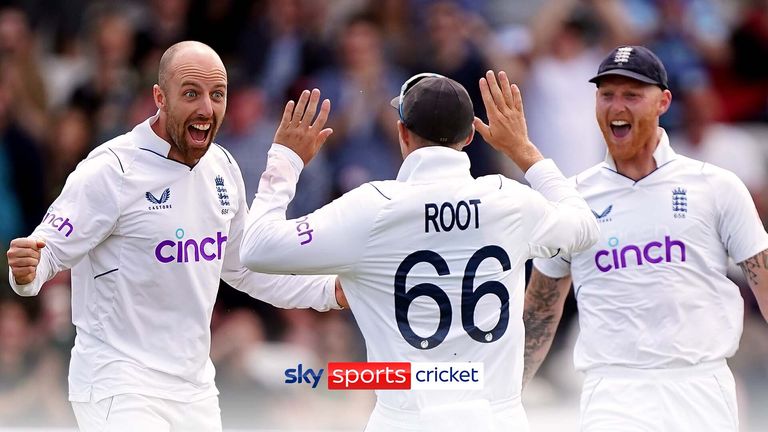 Leach endured a difficult winter - like most of England's Test team, to be fair - with Australia dishing out particular punishment to the slow left-armer during The Ashes.

However, the 31-year-old followed his first five-wicket haul in England earlier in the third Test against New Zealand at Headingley with another on day four as his fortunes continued to turn. 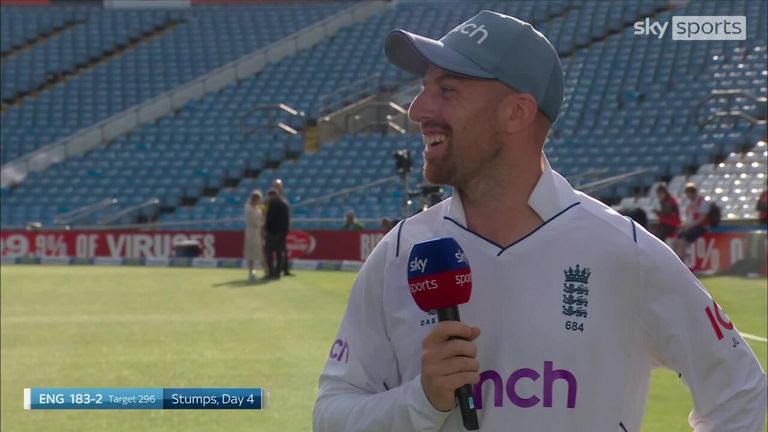 "Stokesy's confidence in his decisions but also us as players - I have never experienced anything like it.

"It is very special to be a part of and that is credit to Stokesy and Baz (Test coach Brendon McCullum) for setting that up."

Butcher: Leach has proved me wrong

Sky Sports Cricket's Mark Butcher looks at where Leach is improving; the impact Stokes is having on his game; and why spin bowling coach Jeetan Patel deserves plaudits, too…

"I watched Leach toil through 90-odd overs in the West Indies on a flat old deck in Barbados earlier this year and I wondered whether he was ever going to have enough in the way of guile and skill to survive in Test cricket. 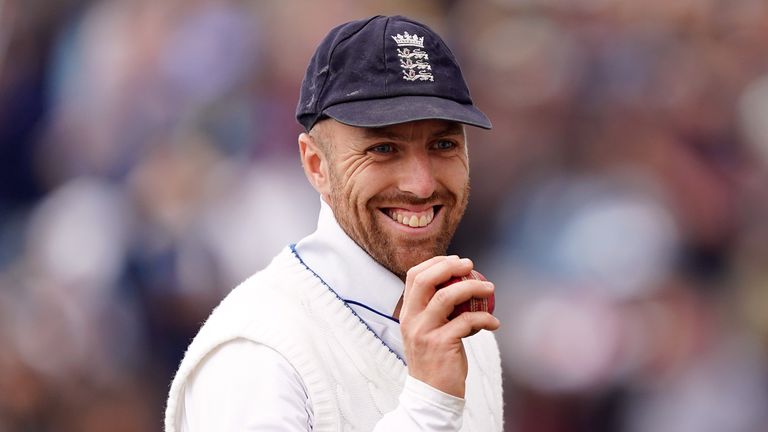 "He has proved me wrong and probably a lot of other people wrong. He has found drift, found dip, found sharp turn at times and he has the skill to be able to bowl the delivery that goes on with the arm.

"I know that he has been a work in progress. Jeetan Patel has said, 'it is coming, Jack is working on things, he knows he has to if he is going to be successful in Test match cricket'. Well, it fell into place here at Headingley.

"Jack has always been accurate and picked up wickets on turning pitches at places like Taunton. The question has been whether he has the skill and guile to be able to fool batters on flattish pitches in Test cricket without the ball turning square. He has here."

Butcher: Stokes has given Leach confidence

"All players are human and all human beings like to feel valued. He has perhaps been treated as the last turkey in the shop in the past, literally the last resort.

"Once the seamers have all had a couple of spells each, are flagging a bit and the ball has stopped swinging, then England might stick everyone on the boundary, give the ball to Leach and see what happens. 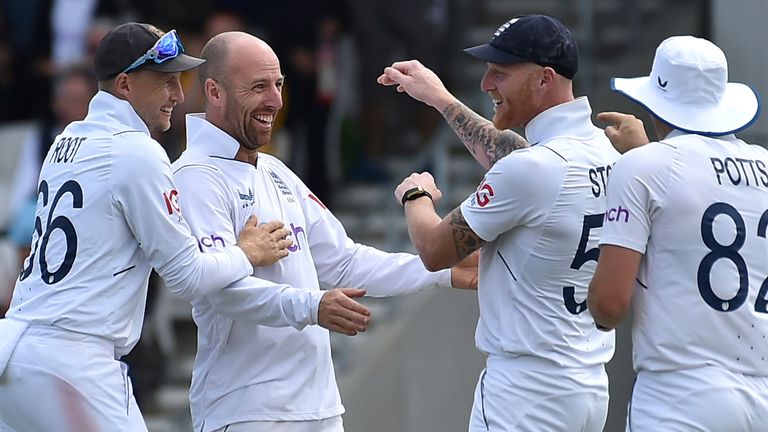 I am really enjoying working with Stokesy. I say 'what about mid-on back?' and he says, 'nope!' It's really attacking and I am really enjoying bowling attackingly. Stokesy's confidence in his decisions but also us as players - I have never experienced anything like it and it's very special to be a part of.

"Stokes has said 'no, you are a major part of how we are going to go about winning Test matches, I need you in the game, I need you to be able to bowl with the field up, what have you got for me?'

"Leach has delivered in spades and Jeetan deserves a lot of praise here.

"There are times where he might have run out of patience, thinking the project might not have been coming along fast enough but he and Jack have stuck at it, worked hard and Jack has deserved everything he has got." 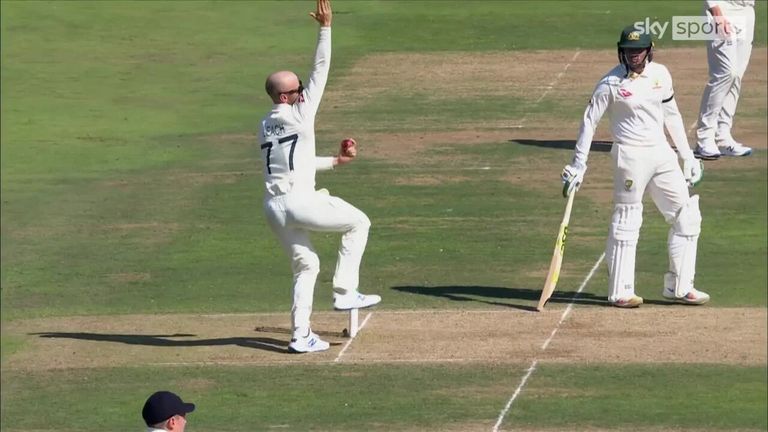 Butcher's fellow Sky Sports Cricket pundit Nasser Hussain added of Leach: "I am really pleased for him as he has been through the mill, he really has.

"He suffers from Crohn's disease, has had Covid bubbles, got concussion at Lord's, was under a bit of pressure at Trent Bridge. Moeen Ali is also in the background and would fit perfectly into this regime with the way he plays.

"Jack was under a bit of pressure and to deliver like he has done is brilliant. The biggest tick for Stokes as a captain is getting 10 wickets from your left-arm spinner at Headingley. That is outstanding."

'Terrific Potts is running the show' 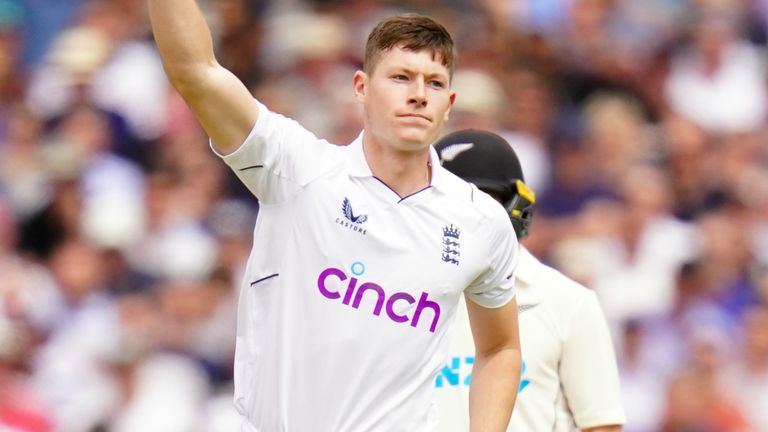 The Durham quick will end it as his side's leading wicket-taker with 14 scalps, three of which have been New Zealand captain Kane Williamson.

The 23-year-old has impressed with his durability, skill, consistency and confidence.

Butcher added: "Potts has been terrific. You saw him on debut and thought he must be unbelievably nervous - but now he is running the show.

"He has been out there telling Stokes where he wants the fielders, picking which side of the field he wants to pack, knocking over the best players in the New Zealand line-up.

"He imparts energy on the ball, even when it's old. People are saying these Dukes balls are hopeless, going out of shape and not doing what you want them to do.

"But this young man is bowling nine-over spells, generating energy out of the pitch, getting the ball to burst through the top, hitting batters on the glove, nipping the ball off the seam this way and that, all with great stamina and great skill."

Watch day five of the third and final LV= Insurance Test between England and New Zealand, from Headingley, live on Sky Sports Cricket on Monday. Coverage begins at 10.15am, with the first ball at 11am.